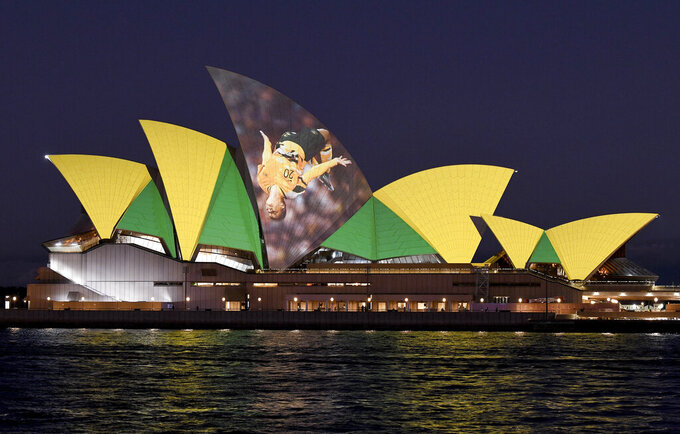 The joint bid beat Colombia 22-13 in a vote Thursday by FIFA's ruling council, which judged them as having the best commercial prospects for women’s soccer.

FIFA President Gianni Infantino was one of the members who voted for Australia and New Zealand to stage the first 32-team Women's World Cup, then revived a suggestion aired at last year's tournament in France to stage it every two years instead of every four years.

“We need to boost women’s football," Infantino told reporters from FIFA's headquarters in Zurich. “If you have to wait four years all the time, maybe it’s a bit long.”

FIFA's decision means South America is still waiting to host its first Women's World Cup, a tournament that was first played in 1991.

The 2023 tournament will be the first time a World Cup for men or women will be shared across two countries from different FIFA confederations. Australia is a member of Asia’s soccer body and New Zealand is in the Oceania group. It is also the first co-hosted women’s edition.

Both Australia, the No. 7-ranked team in women’s soccer, and No. 23 New Zealand will qualify automatically for the tournament.

Infantino acknowledged that he was “surprised” by the alliance of soccer's traditional continental powers, who have been critical of his plans in the past — including a 24-team Club World Cup in China that is on hold due to the pandemic.

For New Zealand, the tournament is being billed as the largest sporting event the country has hosted. New Zealand Prime Minister Jacinda Ardern worked the phones this week to urge support for the bid, and her government has already set aside NZ$25 million to help preparations for the tournament.

“It will be an historic tournament of firsts that will create a profound and enduring legacy for women’s football in the Asia-Pacific region and beyond,” Ardern said. “We are looking forward to delivering the best ever FIFA Women’s World Cup in both nations, one that will elevate the women’s game and inspire women and girls around the world.”

Lydia Williams, goalkeeper for Australia's women's team, said the nerves were intense as the players waited through the early morning hours awaiting the decision.

“I’ve never sweated so much in non-training situations, ever,” Williams said. "It’s about time there were some really good news. Especially in Australia, with football, and everything that’s happening.

"It’s so heartwarming to see this amazing news, at 2 a.m., being shown all over the country and the world.”

The Australia-New Zealand bid had far outscored Colombia in an evaluation published by FIFA inspectors this month.

“These reports have to mean something. It was not the case in the old FIFA,” said Infantino.

His comments seemed like an apparent jibe at the 2010 by a soon-discredited ruling committee which picked the higher-risk options of Russia and Qatar as men's World Cup hosts in 2018 and 2022. The fallout and criminal investigations arising from that bid process removed a swath of soccer officials in Zurich and South America and helped lift former UEFA official Infantino into the presidency.

The winning bid Thursday proposed playing in 12 cities — seven in Australia and five in New Zealand — in July and August. It includes the main stadium used for the 2000 Sydney Olympics.

After a successful World Cup last year won by the defending champion United States, FIFA wants the next women’s tournament to further establish its independence from the men, and show it is commercially attractive.

At least $100 million is expected to be paid by FIFA in 2023 for prize money, team preparation costs and to clubs releasing players for the tournament.

Infantino lamented Thursday that long-term broadcasting and sponsor deals he inherited at FIFA limited its ability to commercialize the women's event.

“Our hands are still a bit tied up by old contracts which were done by the old FIFA,” he said, blaming a culture of selling men's World Cup packages so that “everything else was given as a gift.”

One commercial challenge for the 2023 tournament will be the time zones: Auckland in New Zealand, which should host the opening game, is 16 hours ahead of New York.

Seven of the quarterfinalists last year were European, and an afternoon kick off in Sydney would be breakfast-time viewing in Paris or Berlin.

Thursday's vote could also be the last World Cup host chosen by the 37-member FIFA Council. The men's host is picked by FIFA's 211 member federations.

“There is no reason," Infantino said, "to treat men and women differently.”