Banned from the Olympics by IOC, NKorea puts blame elsewhere 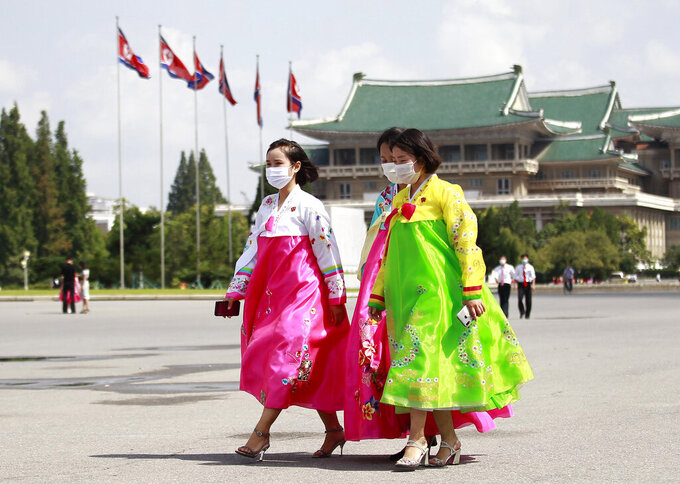 FILE - Citizens wearing face masks to help curb the spread of the coronavirus walk in Pyongyang, North Korea on Aug. 25, 2021. North Korea said Friday, Jan. 7, 2022 it would skip next month’s Beijing Olympics because of the COVID-19 pandemic and "hostile forces' moves," a largely redundant statement since the country has already been banned from the Games by the IOC. (AP Photo/Jon Chol Jin, File)

SEOUL, South Korea (AP) — North Korea on Friday said it would skip next month’s Beijing Olympics because of the COVID-19 pandemic and “hostile forces’ moves,” a largely redundant statement since the country has already been banned from the Games by the IOC.

In September, the International Olympic Committee suspended North Korea through 2022 for refusing to send a team to the Tokyo Summer Games, citing the pandemic. IOC President Thomas Bach said at the time that individual athletes from North Korea who qualify to compete in Beijing could still be accepted. There is no word of that happening.

On Friday, North Korea’s state media said its Olympic committee and sports ministry sent a letter to their Chinese counterparts to formally notify its last major ally and economic pipeline that it cannot attend the Olympics. The Games open on Feb. 4.

“We could not take part in the Olympics due to the hostile forces’ moves and the worldwide pandemic,” the letter said, according to the official Korean Central News Agency. “We would fully support the Chinese comrades in all their work to hold splendid and wonderful Olympic festival.”

The KCNA dispatch didn’t elaborate on what the hostile forces are. But Cheong Seong-Chang, analyst at the private Sejong Institute in South Korea, said they likely refer to the IOC, or the U.S., France and Britain, which North Korea believes is behind the IOC suspension.

“Throughout China’s preparation for the Beijing Games, the DPRK has been providing us positive support. The DPRK reaffirmed its support and solidarity with China in hosting a grand Olympic Games on January 5, and we appreciate that,” Wang said, using the initials for North Korea’s official name.

Despite the IOC decision, there was still hope in Seoul and elsewhere that the Games could serve as a venue for reconciliation between the rival Koreas with the support of the IOC. At the 2018 Winter Games in Pyeongchang, South Korea, athletes from the rival countries marched together in the opening ceremony and fielded a single team in women’s hockey.

Such hopes were set back last week when North Korean leader Kim Jong Un vowed to bolster his armed forces and retain the strict virus restrictions, but didn't disclose any new policies toward Washington and Seoul during a key political conference. On Wednesday, North Korea conducted what it called a hypersonic missile test in its first weapons test in two months.

“There is no reason for Kim Jong Un to take part in the Beijing Olympics and South Korea’s push for a political declaration to end the Korean War on the occasion of the Olympics has fizzed,” Cheong said.

North Korea has maintained one of the world’s toughest restrictions to guard against COVID-19, including two years of border shutdowns. The country has been skipping major international sports events, including Olympic preliminary events, since the pandemic began.

The North Korean letter also accused the United States and its allies of trying to hamper the successful hosting of the Games.

“The U.S. and its vassal forces are getting more undisguised in their moves against China aimed at preventing the successful opening of the Olympics,” the letter said. “(North Korea) resolutely rejects those moves, branding them as an insult to the spirit of the international Olympic Charter and as a base act of attempting to disgrace the international image of China.”

The letter likely refers a diplomatic boycott of the Games, led by the United States, to protest China's human rights records. Under the boycott, athletes will compete in the Games but no official delegations will be sent to Beijing. China has called the U.S. action an “outright political provocation.”