Barcelona to give Pedri 2-week break after marathon run 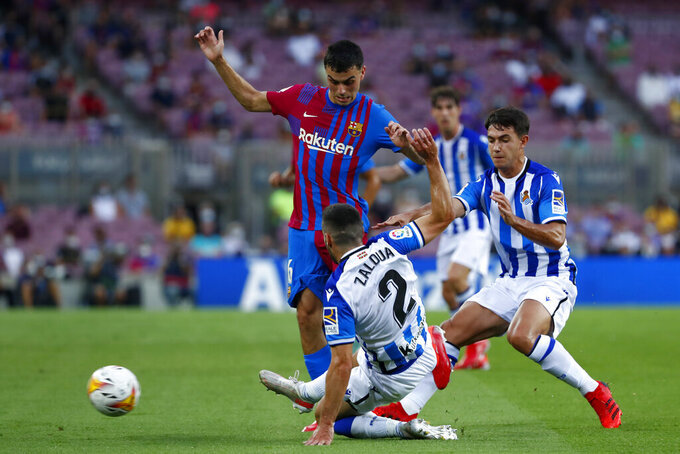 BARCELONA, Spain (AP) — After missing only one league game for Barcelona last season, before going on to play for Spain at the European Championship and the Tokyo Olympics, Pedri González will finally get some rest.

Barcelona coach Ronald Koeman said Friday that his prized midfielder will take a two-week break after Saturday’s match against Athletic Bilbao in the Spanish league.

“We have taken this decision because we don’t want him to have physical problems when we get into November and December,” Koeman said. “It is impossible to play as many games as he has this season, including two tournaments this summer.”

The 18-year-old Pedri has played 74 games for club and country since he made his debut with Barcelona at the start of last season. He helped Spain advance to the semifinals of the European Championship and reach the gold-medal match in Tokyo.

And once back home, Pedri played in Barcelona's opening league game last weekend.

He will miss matches against Getafe and Sevilla in the league during his two-week absence.

Pedri’s precision passing and vision as a playmaker quickly won over both Koeman and Spain coach Luis Enrique. The one game he missed for Barcelona last campaign was the final match of the season when Barcelona had no chance of winning the title.

The only minute of Spain’s Euro 2020 campaign Pedri didn’t play was in the quarterfinals. He was named the best young player of the tournament.

With Lionel Messi gone from Camp Nou, the soft-spoken Pedri is now one of Barcelona's main hopes of building a winning team without its Argentine star.

But for now, he needs to put his feet up.