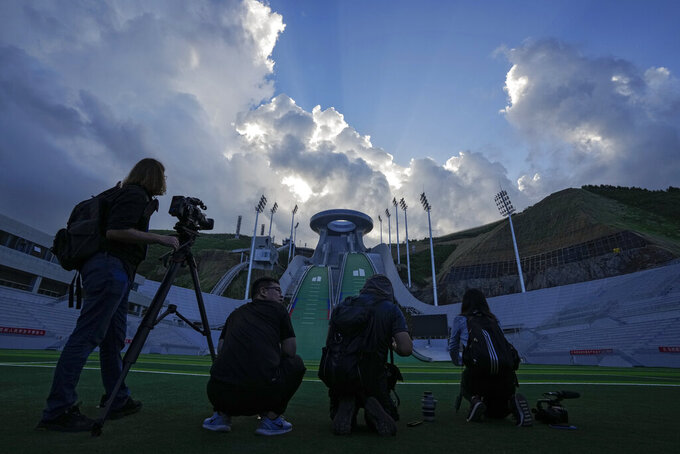 FILE - In this July 14, 2021, file photo, journalists film the National Ski Jumping Centre, one of the venues for Beijing 2022 Olympic and Paralympic Winter Games, during a media tour in Zhangjiakou in northwestern China's Hebei province. The IOC says the Olympics are only about the sports; no politics allowed. But reporters from other countries who puncture the PR skin to explore other aspects of life in China — as they have in Japan during the Tokyo Olympics — could draw more than criticism. (AP Photo/Andy Wong, File)

TOKYO (AP) — The IOC says the Olympics are only about the sports; no politics allowed. This will be the mantra, as it always is, when the Beijing Winter Games open in six months.

Covering ski races or figure-skating finals should be painless; just stay in the sports bubble and out of trouble. But reporters from other countries who puncture the PR skin to explore other aspects of life in China — as they have in Japan during the Tokyo Olympics — could draw more than criticism.

They could face harassment and threats if portrayals are deemed by the government — and the increasingly nationalist public — to be giving a negative view of China.

“It demands this from governments, but also corporations, media, and individuals," she said in an email. "So, do I think China is going to go after anyone, including sports reporters during the Olympics, that deviate from the ‘acceptable’ script? Yes, I absolutely do.”

China’s foreign ministry has repeatedly criticized the “politicization of sports” and has said any Olympic boycott is “doomed to failure.” It has not addressed journalism during the Games specifically.

The peril for journalists was evident last week when foreign reporters covering floods in central China were targeted. The Communist Youth League, an arm of the Chinese Communist Party, asked social media followers to locate and report a BBC reporter on assignment. That expanded into broader accusations against foreign reporters for “slandering” China with coverage that could be seen as critical rather than focusing on government rescue efforts.

In a statement, The Foreign Correspondents' Club of China said the “rhetoric from organizations affiliated with China's ruling Communist Party directly endangers the physical safety of foreign journalists in China and hinders free reporting.”

The organization added that staff from the BBC and the Los Angeles Times “received death threats and intimidating messages and calls.” This came after China last year expelled more than a dozen American reporters working for The Washington Post, The Wall Street Journal, and The New York Times.

Beijing was the IOC's unlikely choice for the 2022 Winter Olympics, a decision made in 2015 chiefly because European favorites like Oslo and Stockholm pulled out for financial or political reasons. The IOC was left with only only two candidates: Beijing and Almaty, Kazakhstan.

The IOC has declined several recent demands to move the Olympics out of Beijing. China is accused by some foreign governments and researchers of imposing forced labor, systematic forced birth control and torture upon Uyghurs, a largely Muslim ethnic group Xinjiang, a region in the country's west.

China has denied committing genocide against the Uyghur people, calling such accusations “the lie of the century.”

Last week a vice president of Intel, one of the IOC's top 15 sponsors, said he agreed with a U.S. State Department assessment that said China was committing genocide against Uyghurs and other minorities in Xinjiang. Other sponsors including Coca-Cola, Visa, Procter & Gamble, and Airbnb appeared in a congressional hearing but wouldn't answer most questions directly.

“It’s what I refer to as the Olympics Catch-22 for illiberal regimes like China,” Victor Cha, an Asian specialist at Georgetown University, wrote in an email to AP. Cha surveyed the politics of sports in Asia and the 2008 Beijing Olympics in his book “Beyond the Final Score.” He also served from 2004-2007 in the Bush White House as director for Asian affairs at the National Security Council.

“They want all the glory and attention of hosting the world for the Winter Games, but they want none of the inevitable criticism that comes with the media magnifying glass," Cha said. “All hosts have to deal with this; witness all of the scrutiny over COVID pre-Tokyo. The difference is how the hosts handle it.”

The IOC says its focus is only sports, though it's a highly political body with an observer seat at the United Nations. IOC President Thomas Bach touted his efforts to bring the two Koreas together during 2018 Winter Olympics in Pyeongchang, South Korea. He also addressed world leaders in 2019 in a G20 summit in Osaka, Japan.

“Our responsibility is to deliver the Games," said Mark Adams, the IOC's spokesman. “That is our responsibility. It is the responsibility of others — the United Nations, who have been very supportive of the Olympic Games, and governments to deal with this — and not for us."

He added: “Given the diverse participation in the Olympic Games, the IOC has to remain neutral. That’s clear."

Adams was asked in an email if the IOC was willing to “condemn China's policy of interning Uyghurs and other largely Muslim minorities." He did not answer the question and referred to previous statements. “At all times, the IOC recognizes and upholds human rights within its remit," Adams wrote. “This includes the rights of journalists to report on the Olympic Games.”

The IOC included human rights requirements several years ago in the host city contract for the 2024 Paris Olympics, but it did not include those guidelines — the U.N. Guiding Principles on Business and Human Rights — for Beijing. Paris is the first Olympics to contain the standards, long pushed for by human rights groups.

In countless interviews about China and its preparations for the Winter Olympics, Bach has not mentioned the situation of the Uyghurs. Nor has he said it was a topic covered in meetings of his executive board.

The IOC, however, has promoted press statements about conversations Bach has had with Chinese President Xi Jinping, though it has not revealed the content.

The Chinese Minister of Foreign Affairs, reacting to the BBC incident, essentially said the British news organization had it coming.

“The BBC has a long history of ideological bias against China,” ministry spokesman Zhao Lijian said. “It has been producing and broadcasting fake news, spreading false information on issues related to Hong Kong, Xinjiang, and the COVID-19 epidemic to attack and discredit China.”

“The BBC has been reporting on China with tinted glasses for a long time, which brought down its reputation in China," Zhao added.

Yaqiu Wang, a China researcher for Human Rights Watch who grew up near Shanghai, said “the foreign media had brand credibility five or six years ago.” But she said increasing information control by the Chinese state does not allow average Chinese to get a fair assessment of what the Western press is saying about China.

Wang said the mood is vastly different from 2008, when Beijing held the Summer Olympics. Many outside China hoped the Olympics would improve human rights, and some Chinese saw it as period of optimism. Controls over the foreign media were relaxed in the runup to the Olympics, which some interpreted as a relaxation on the political front after decades of “reform and opening-up,” as China refers to its 40 years of economic reconfiguration.

“The hostility among the people is real, much more real than before,," Wang said. ”That kind of hostility did not exist in 2008, but it exists now. Among average people, they know that saying bad things about the West or being hostile, they know it’s in your interest to do that.”

“If you go to a stadium, it will be all good if they feel you are covering something good," Wang added. "But say you speak to some dissidents or somebody who is a victim of some kind of abuse, you could be in a dangerous position.”

AP Sports Writer Stephen Wade reported from Beijing for 2 1/2 years covering the runup to the 2008 Olympics, the Games, and its aftermath. More AP Olympics: https://apnews.com/hub/2020-tokyo-olympics and https://twitter.com/AP_Sports