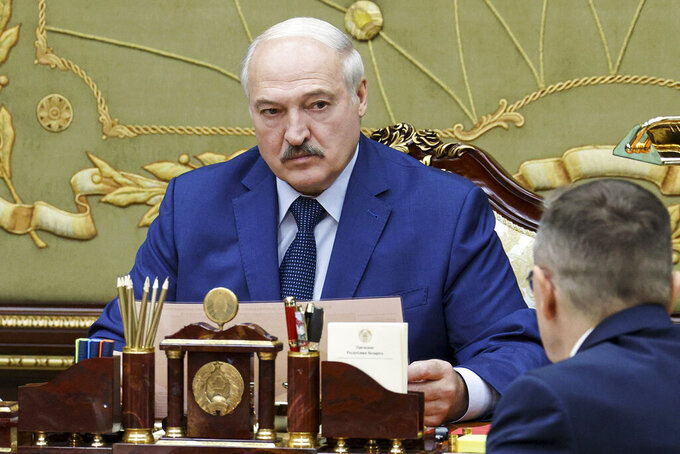 GENEVA (AP) — The top ice hockey official in Belarus was banned for five years on Wednesday for politically motivated threats against players and supporting the country's authoritarian president.

The International Ice Hockey Federation also investigated Dmitri Baskov's alleged role in an incident that led to the killing of an activist last year but could not find any evidence of “active involvement,” the governing body said.

Baskov was found to have “abused his position as a representative of ice hockey in order to support the current President of Belarus, Alexander Lukashenko,” the IIHF said in a statement.

Belarus has been in turmoil for more than a year since Lukashenko was re-elected in a vote widely seen as rigged and which led to a violent crackdown on pro-democracy protests.

The IIHF said Baskov was “an avid supporter” of Lukashenko, who was banned from attending future Olympic Games by the IOC after allegations that athletes who supported protests were targeted for reprisals.

The former Soviet republic’s treatment of athletes was highlighted in Tokyo last month when sprinter Krystsina Tsimanouskaya was taken to an airport by two team officials after criticizing coaches in a social media post.

Tsimanouskaya refused to board a flight to Belarus fearing for her safety and was given a humanitarian visa to stay in Poland.

Baskov's ban from national and world hockey includes the next two Winter Games, next February in Beijing and the 2026 Milan-Cortina Olympics in Italy. He was also barred from the Tokyo Olympics by the IOC because of the allegations he faced.

However, Baskov shows no sign of complying with the IIHF verdict, which he can challenge in an appeal to the Court of Arbitration for Sport.

The Belarus Hockey Federation said Baskov would not step down and said the ruling was the result of “constantly increasing pressure of political forces on the IIHF.”

It argued Baskov had merely expressed his “personal civic opinion” on issues.

Evidence against Baskov was provided by the Belarusian Sports Solidarity Foundation (BSSF) and an independent investigations firm, the IIHF said.

The governing body said it had investigated reports that Baskov was involved in the lethal attack of of Roman Bondarenko, a Belarusian citizen who died of his injuries after he was allegedly seized and beaten by security forces at an incident last November where police were removing red and white ribbons hung by opposition supporters.

It said “although it cannot be excluded that Baskov was present at the event, it did not find evidence for an active involvement of Baskov in the attack against Bondarenka.”

The IIHF said its disciplinary panel confirmed Baskov “has close personal ties to President Lukashenko as well as hockey connections with two of the president’s sons.”

“The (panel) cited sufficient evidence that Baskov has tried to directly influence others to support the Belarus government and has threatened and discriminated Belarusian athletes because of their political opinion,” the governing body said.

IIHF cited its rules requiring political neutrality, though long-time president René Fasel visited Lukashenko in January while trying to retain Belarus as co-host of the men's world championships this year.

A backlash from tournament sponsors led the IIHF to remove Belarus and the tournament went ahead in Latvia alone.

Belarus has a candidate, Sergej Gontcharov, in the five-man contest to replace Fasel at a Sept. 25 election meeting in St. Petersburg, Russia. Fasel is stepping down after 27 years.