Boxing aims for calm, cool Olympics after years of drama 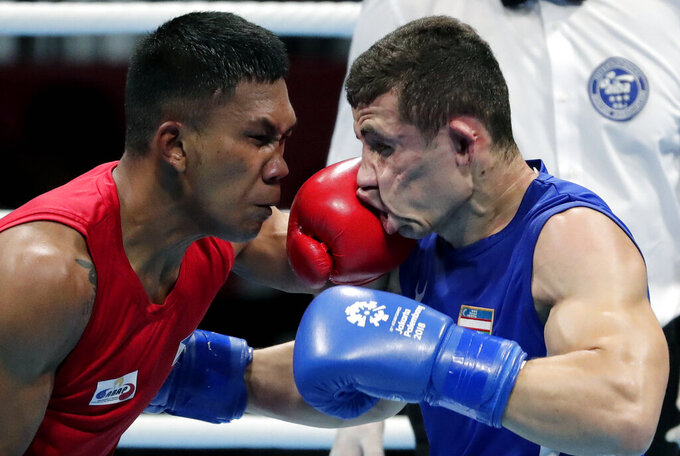 FILE - In this Friday, Aug. 31, 2018, file photo, Phillippines' Eumir Felix Marcial, left, and Uzbekistan's Israil Madrimov fight in their men's middleweight boxing semifinal at the 18th Asian Games in Jakarta, Indonesia. The International Boxing Association (AIBA) allowed professional boxers into the Olympics for the first time in Rio, but just three competed, and none did well. The COVID-affected qualification process and a general disinterest among top pros means there won't be any household names fighting in Tokyo, either. There are several pros in the field, but most, like Filipino middleweight Eumir Marcial, kept a foot in each boxing world during the pandemic. (AP Photo/Lee Jin-man, File)

After a half-decade of turmoil and drama at the highest levels of Olympic boxing, the sport's trip to Tokyo looks as if it could be fairly smooth.

At least as smooth as this notoriously chaotic sport ever gets.

The much-criticized International Boxing Association (AIBA) was banned from this Olympic cycle, and a quiet task force is running the Tokyo tournament. The competition rules are largely unchanged from Rio, and another effort has been made to improve the inconsistent judging that has been this sport's most-criticized aspect for decades.

So with a strong field of returning Olympians and promising new talent, will the actual fights take center stage in Tokyo? The top figures in the Olympic game seem cautiously optimistic.

“I hope it'll be a situation where we get to see the best boxers rewarded for the best performances,” U.S. head coach Billy Walsh said.

The IOC took the extraordinary step of suspending its recognition of AIBA in 2019 after a series of scandals, with the drama surrounding the organization’s financing playing a bigger role in the decision than the judging at the 2016 Rio Games.

The Olympic tournament in Tokyo will be run by an IOC boxing task force led by Morinari Watanabe, a gymnastics executive and a board member for the Tokyo Games.

The change in leadership likely won’t affect the competition much when the boxers hit the ring. The rules — three-round bouts, no headgear for the men — are all familiar, and the pro-style scoring will be the same.

But if anyone thinks the absence of AIBA will improve the competitors’ opinion of Olympic judging, think again.

Every major amateur boxing tournament for decades has featured countless furious fighters utterly convinced they were robbed of a decision in a sport that rarely produces an undebatable winner in its brief competition time.

The switch to a 10-must scoring system was praised in Rio — except when the perceived wrong fighter got the verdict, most notably in Evgeny Tishchenko's heavyweight gold medal victory over Kazakhstan's Vassiliy Levit, who is back for Tokyo.

The biggest change for Tokyo is the addition of two women's weight classes, allowing 100 women to compete after just 36 fought in Rio.

The additions came with a drawback, however: Because the IOC didn't increase boxing's total athlete quota, those new places for women had to be created through the elimination of two men's weight classes.

Qualification for the Tokyo Games was a patchwork project after the cancellation of some qualifying events, but three teams are sending 11 boxers apiece: Uzbekistan, Britain and the Russian team.

Uzbekistan is an international power after topping the table in Rio with three golds and seven total medals, while the Russians hope for improvement after landing just four medals — and only Tishchenko's debatable gold — from their 11 boxers in Brazil.

“To qualify 11 boxers is a fantastic achievement, especially as the boxers only had one competitive opportunity to earn a place," said Rob McCracken, GB Boxing's performance director. “The last 12 months has been very challenging for us all, but the coaches and support staff have done a great job of preparing the team, and the boxers have delivered when it matters most.”

Mary Kom, the pioneering Indian boxer and 2012 bronze medalist whose inspirational life story spawned films and books, qualified for a third Olympics. The 38-year-old mother of four and member of parliament seems unlikely to be a medal contender in the flyweight division, but Kom has overcome greater odds.

AIBA allowed professional boxers into the Olympics for the first time in Rio, but just three competed, and none did well. The COVID-affected qualification process and a general disinterest among top pros means there won't be any household names fighting in Tokyo, either. There are several pros in the field, but most — like Filipino middleweight Eumir Marcial or Shakhoibidin Zoirov, Uzbekistan’s Rio gold medalist — kept a foot in each boxing world during the pandemic.

The men's super heavyweights will be pleased to know the Olympic tournament will be held at the 7,300-seat Kokugikan Arena, the traditional home of Japan's highest levels of sumo competition for the past 100 years.