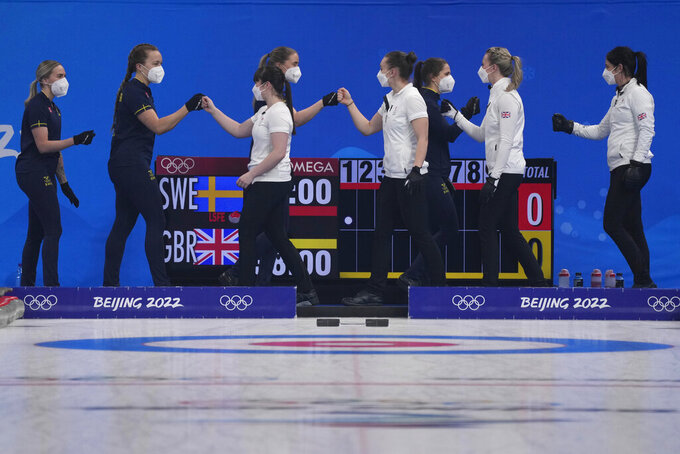 Team Sweden, in blue, and Britain greet each other before the start of the women's curling semifinal match between Britain and Sweden at the Beijing Winter Olympics Friday, Feb. 18, 2022, in Beijing. (AP Photo/Nariman El-Mofty)

BEIJING (AP) — The British will have two chances to win a gold medal in curling, a sport that is Scottish in every way — except the Olympic results.

A day after the British men clinched their berth in the finals, Eve Muirhead's foursome joined them with a 12-11, extra-end victory over defending Olympic champion Sweden.

The British women — actually, every player on all of Britain’s curling teams is from Scotland, and so are the rocks they use in competition — will play Japan in Sunday's gold medal match.

Bruce Mouat's men play Sweden in the final Saturday, when the matches will again be heralded by bagpipers in full Highland regalia. If they win, it would be Britain's first men's curling medal since 1924; the women won it all in 2002, when the sport returned to the Winter Games after a 78-year absence.

“I think there will be a fair few watch parties,” British second Jennifer Dodds said. “I’m so glad we definitely got two medals coming out of this. And I just hope people come in to try it and really get into the sport, because it’s a sport we love to play. And I really hope other people see it and get to love as we do."

Sweden will play Switzerland for the bronze.

In a bonkers women's semifinal session, Sweden and Japan both scored four-enders early only to have their opponents come back with a three.

Four-enders are rare: There were only a handful over more than 400 ends in 45 women’s round-robin matches. Three-enders are more common, but still a high score.

Muirhead added a four of her own in the second-to-last end to take an 11-8 lead — usually a knockout blow, with only one chance for Sweden to come back. Sweden’s Anna Hasselborg did just that, scoring three in the 10th to force overtime.

But her last shot in the extra end was inches too far from the target, and Muirhead didn’t even have to throw her final stone.

“After we lost the four in the first end we were like, ‘Right, we need to grind this out.’ Which we know we can do,” Dodds said. “That kind of sums up this season.”

The Swiss trailed 7-5 after eight and had a chance to tie it in the ninth, but a last-stone takeout was swept out of the back of the house, and they only managed one point.

With the last-rock advantage in the 10th, Japan scored a routine single point to clinch it.

In a matchup that mirrored Saturday’s men’s gold medal game, Sweden and Britain were tied 7-7 through seven ends. The defending champion Swedes had one edge: If things went according to form, they would have the last rock twice to once for the British.

But Muirhead made her one chance count: With her four yellow stones near the center of the target area — and a single red one even closer — she played a ricochet and nudged the Swedish stone away, leaving four British ones behind.

Needing three in the 10th and final end, Sweden filled the target area with rocks and then, with her last shot, Hasselborg cleared out the British red ones to tie it.