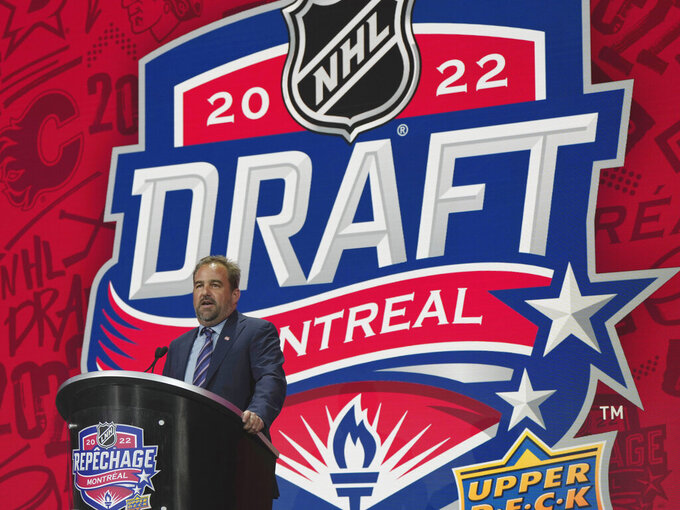 MONTREAL (AP) — The Montreal Canadiens selected winger Juraj Slafkovsky with the first pick in the NHL draft Thursday night, making him the first player from Slovakia to be taken No. 1.

Slafkovsky, who starred at the Beijing Olympics without NHL players and was the tournament MVP, was the choice over Canadian center Shane Wright, who had long been considered the front-runner to be in this spot even before Montreal won the draft lottery.

Instead, the Canadiens took the 6-foot-4 Slafkovsky, who surpasses Marian Gaborik as the highest-drafted player from Slovakia. Gaborik went third to Ottawa in 2000.

Slafkovsky, who has drawn comparisons to late Hockey Hall of Famer Clark Gillies and plays a bit like a young Jaromir Jagr, said he told the Canadiens on Thursday morning to take him.

The Canadiens were choosing between Slafkovsky, Wright and American forward Logan Cooley in their first time atop the draft since 1980.

Slafkovsky, who turned 18 in March, is among the most NHL-ready players in the draft after playing against grown men in Finland this past season and impressing at the Olympics with seven goals in seven games. The youngest player in the tournament was the biggest reason Slovakia won an Olympic bronze medal for the first time.

New Jersey Devils general manager Tom Fitzgerald said he had been taking calls on the second pick ahead of the Arizona Coyotes at No. 3 and Seattle Kraken at No. 4.

Chuck Fletcher, whose Philadelphia Flyers pick fifth, said Wednesday he expected a lot of trades at the draft. Other GMs around the league didn't want for the draft to begin to start dealing.

The Stanley Cup champion Colorado Avalanche got things started by acquiring goaltender Alexandar Georgiev from the New York Rangers for a third- and a fifth-round pick in this draft and a third-rounder next year.

The Chicago Blackhawks began their much-anticipated dismantling of their roster by sending winger Alex DeBrincat to the Ottawa Senators for the seventh and 39th picks and a third-rounder in 2024.

NHL Commissioner Gary Bettman opened the draft in French by saying, “Bon soir, Montreal.” When fans booed him as is tradition, he said: “Thank you for that welcome. It is a return to normalcy.” This was the first in-person draft for the league since 2019 in Vancouver.

It’s the first time the host team picked first since the Toronto Maple Leafs in 1985 when they got Wendell Clark. The Leafs got the loudest boos during roll call, with some in the crowd chanting, “’67!” in reference to the last year Toronto won the Stanley Cup.

Recent deaths in hockey were also recognized before the Canadiens went on the clock. Bettman asked those on the draft floor and in the stands to hold a moment of silence for retired defenseman Bryan Marchment, who died at age 53 Wednesday in Montreal where he was attending the draft as a scout for the San Jose Sharks.

Children of late Hall of Famers Guy Lafleur and Mike Bossy also addressed the crowd, along with Canadiens coach Martin St. Louis, who was serenaded by chants of “Ole! Ole! Ole!” Famously undrafted before having a Hall of Fame career, St. Louis joked: “It took me 45 years to finally be at my first draft. It was worth the wait.”

The opposite pressure now belongs to Slafkovsky, who could soon play alongside top Canadiens forwards Nick Suzuki and Cole Caufield.