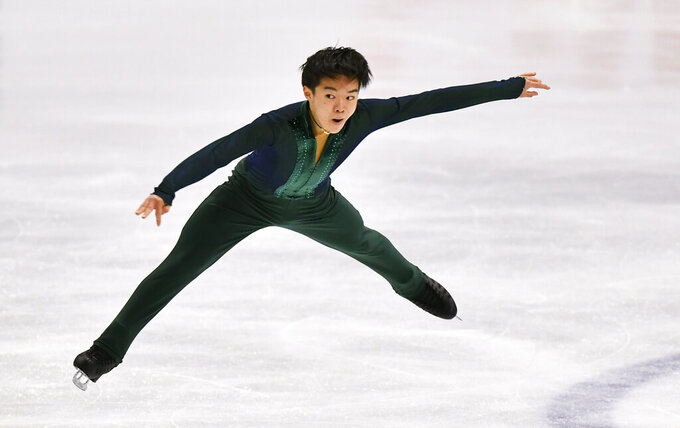 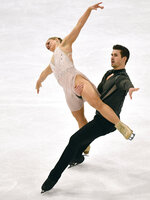 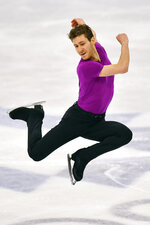 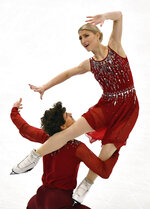 STOCKHOLM (AP) — Nathan Chen already has established himself as one of America's greatest figure skaters. His performance Saturday lifted him into the company of history's best worldwide.

In becoming the first American since Scott Hamilton to win a third consecutive World Figure Skating Championships men's title, the 21-year-old Chen also outskated two-time Olympic champion Yuzuru Hanyu of Japan. And Chen believes he has been — and can be — even better.

“I wouldn’t say this is my best free program ever,” he said. “But it's one I will definitely remember forever and cherish, being able to skate like that and skate this piece here at worlds.”

Chen was dynamic in easily surpassing short program winner Hanyu and stamp himself as the man to beat at next year's Beijing Olympics. Hanyu struggled mightily Saturday and fell to third place behind 17-year-old countryman Yuma Kagiyama, who took silver in his first senior worlds.

Last year’s event was canceled because of the COVID-19 pandemic.

No one has had the jumping mastery of Chen. His “Quad King” reputation is well founded, and he landed his five four-rotation jumps with what NBC analyst Johnny Weir dubbed “technical wizardry.” But there was more to it: an intensity, even a ferocity, as if Chen was conquering each quad rather than simply completing them. Plus a balance of artistry and technique that has improved since 2017, when Chen won his first of five successive U.S. titles.

Even the look on his face at the conclusion of his free skate was intensely focused rather than celebratory.

Besides, Chen had to await Hanyu's performance, which was, for the Japanese star, rather pedestrian. He opened up on two jumps, had sloppy landings on others, and seemed to know it was not nearly enough when he shook his head before taking a bow and leaving the ice.

Hanyu, whose artistry is unmatched among today's men, might not have been at his best physically.

“Coming into this competition I have been working a lot on my quad axel and so I have overworked my body,” he said. “So it is important to get my body well. I want to go back to practicing it again. I want to be the very first person to land it cleanly in an official competition.”

That won't happen for a while with the major events of a truncated season concluded. It's possible Chen and Hanyu won't face off again until December's Grand Prix Final — or perhaps even until the Olympics.

Kagiyama couldn't sit still awaiting his marks after a personal best by 11 points in which he landed three quads and, despite a couple of bobbles, was a solid second to Chen in the free skate. Kagiyama leaped and ran in place in the kiss-and-cry zone, then sat and practically danced in his seat as the magnitude of his achievement hit home.

“When I go back to Japan, I want to practice more because today I have seen so many things I need to work on,” he said. “So with that takeaway I want to go back on the ice immediately.”

Hamilton won four successive worlds from 1981-84. Since then, three others (Canada's Kurt Browning and Patrick Chan, Russia's Alexei Yagudin) have gotten three in a row.

Chen has not lost a competition since the 2018 Olympics, when perhaps the worst short program of his career doomed him. He rallied with a spectacular free skate to climb from 17th place to fifth.

He's been unmatched since, winning at worlds, nationals, Skate Americas and Grand Prix Finals. And the quads keep on coming, though he chuckled when Hanyu mentioned a 4 1-2 rotation quad axel.

“I am looking forward to next season and what everyone else brings to the table,” Chen said, “and challenging myself to be as good as I can be.”

A fourth-place finish for Mikhail Kolyada assured Russia, which is having an outstanding worlds, of three men's spots at Beijing. The United States and Japan also are assured that.

American Jason Brown, who doesn't have the bigger jumps to match the medalists but is masterful at artistry, finished seventh.

Sinitsina and Katsalapov glided through the free dance to win their first world title by nearly seven points over Americans Madison Hubbell and Zach Donohue. The Russians were second two years ago to France's Gabriella Papadakis and Guillaume Cizeron, who skipped this event.

“I am so happy, really, I don’t know what I can say right now. I just want to smile and cry,” Sinitsina said.

“The one thing that’s missing is the audience,” Katsalapov added.

Hubbell and Donohue, three-time U.S. champs and owners of two previous world medals, also set personal bests in the free dance (128.66) and overall (214.71). But this was Russia's year, except in the men's event.

“This is another world silver medal for us, for the last three world champions we’ve been on the podium," Hubbell said. "We know that takes a lot of work so we’re proud of ourselves for being consistently at the peak of our performance.

“We’re going to enjoy our own win. It wasn’t what we came here for, but it’s still incredibly dear to us.”

Canada's Piper Gilles and Paul Poirier earned bronze with, by far, their best finish in seven trips to worlds. Their free skate to “Both Sides Now” displayed both sides of the discipline: sharp technique and creative artistry.

“We’ve been pretty open and unapologetic about wanting to be on the Olympic podium next season," he said. "So being on the worlds podium the season before is very encouraging for the two of us, and it really lets us know that we’re on the right track.”

Their career-best free dance lifted them past Americans Madison Chock and Evan Bates after he had a slight misstep. Twice winners of world medals and U.S. crowns, they finished fourth.