China eyeing a medal for first time in 28 years 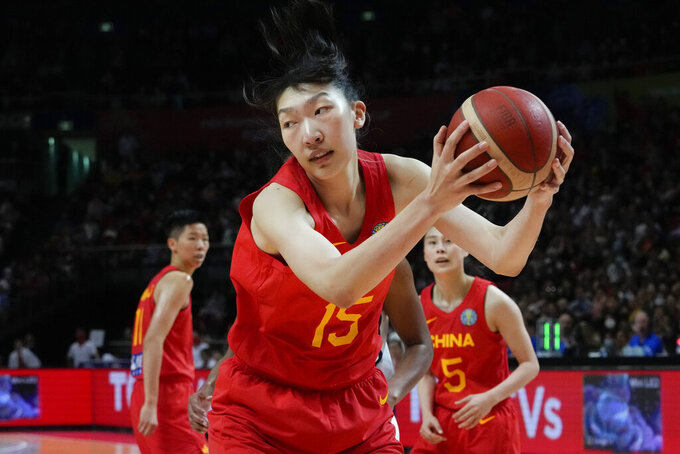 SYDNEY (AP) — It's been 28 years since China last won a medal at the World Cup, finishing second in the 1994 games.

With a dominant inside presence, led by Han Xu and Li Yueru, plus talented shooters and quick guards, the Chinese team has gotten off to a strong start in Australia and could find its way onto the podium.

China is 3-1 in pool play, with the lone loss coming against the U.S. In the three victories, the Chinese team won by an average of 48 points and scored close to 100 points a game. Even a 14-point loss to the U.S. showed that China has improved from finishing sixth in the 2018 World Cup and fifth in last year's Olympics.

“Compared with the U.S. team, the confrontation and intensity of the Chinese team in the first two games of the group stage are not at the same level. I hope the players can benefit from it,” China coach Zheng Wei said through a translator. “Throughout the game, our team only played poorly in the first few minutes and the last three minutes of the second quarter, and the rest of the time was good. I am proud of the performance of the players!”

U.S. coach Cheryl Reeve has seen a lot of improvement in China and joked that she doesn't want them to get too much better.

“We have all the respect in the world for China, we’ve seen them grow ... this is a great time for the women’s national team," Reeve said. "It’s a great time. It’s a very, very good team.”

China plays a more up-tempo unselfish style under Zheng, who took over in May. In Monday's win over Puerto Rico, the team had 39 assists on its 41 baskets.

Chinese fans have taken notice. Besides the host team, China has drawn the biggest crowds at the World Cup. The players have been appreciative of the support, signing autographs and posing for pictures after games.

“I like that our fans come to watch,” said Han, who is averaging 12.3 points and 8.8 rebounds in the tournament.

She came into the tournament after having a strong season in the WNBA for the Liberty and has a huge fan following.

A win over Belgium on Tuesday would secure the No. 2 seed in the pool and more importantly have the team avoiding a rematch with the U.S. until the gold medal game.