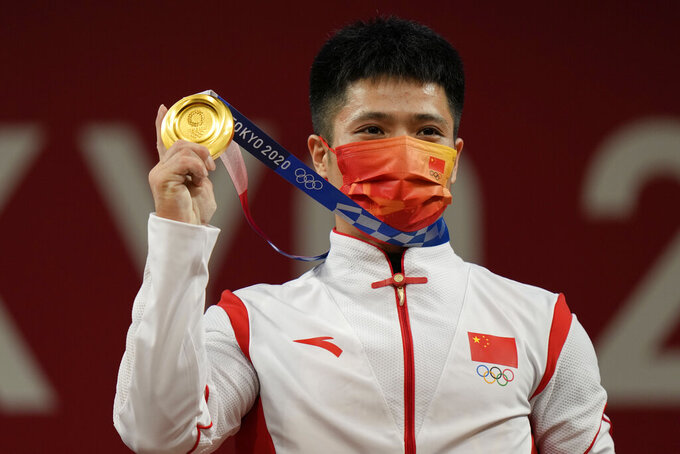 Li Fabin of China celebrates on the podium after winning the gold medal and setting an Olympic record in the men's 61kg weightlifting event, at the 2020 Summer Olympics, Sunday, July 25, 2021, in Tokyo, Japan. (AP Photo/Luca Bruno) 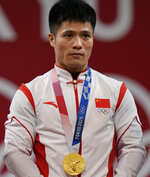 It was gold or nothing when Chen Lijun stepped onto the stage for his second lift in the clean and jerk. He had two shots at lifting 187 kilograms — one kilogram short of the world record — to beat Colombia's Luis Javier Mosquera. Fail and he was off the podium in the 67-kilogram category.

Chen's gold was China's second win of the day. Li Fabin won the 61kg class after pulling off a spectacular “flamingo” lift on one leg as he tried to balance earlier in the competition.

All eight Chinese weightlifters in Tokyo are gold medal contenders. Conditions are favorable for a historic sweep. Traditional rival North Korea is skipping the Tokyo Olympics entirely, citing the coronavirus pandemic. Many other leading nations are fielding smaller squads because of past doping.

No country can enter more than eight of the 14 competitions, which meant tough decisions for China. Some world record holders were even left at home, testifying to the depth of talent.

Mosquera was delighted with the silver medal for Colombia, lifting a total 331kg to Chen's 332. There was controversy when his crucial clean and jerk lift was ruled invalid after he dropped the bar before the siren which signifies the referees are satisfied. It was overturned on appeal. Mosquera had been a medalist in 2016 but never stood on the podium because he was upgraded when another lifter was disqualified for doping. When he got the medal, he touched it to his forehead. Mirko Zanni of Italy lifted 322kg for the bronze medal.

Pakistan weightlifter Talha Talib was second after the snatch as he sought to end his country’s 29-year wait for a medal in any Olympic sport. He failed his first clean and jerk lift and collapsed on stage soon after. After medical staff rushed to his aid, he returned to lift twice more and placed fifth.

In the 61kg category, Li stood on one leg while lifting 166 kilograms — nearly three times his own body weight — with his right leg sticking out in his opening clean and jerk.

The “flamingo” is a specialty for Li, who said it helps him correct his balance if a lift is in danger of going wrong.

“I have very strong core strength and muscles,” he said through a translator. “I know this move pleases the audience but I don't suggest people make the same move. It could provoke injury.”

Li has done the move before at competitions, including at the 2017 Asian championships. He said he's no show off — calling himself a “low-profile person” — just one with an unusual talent for saving a lift.

Li was head-to-head with Indonesian rival Eko Yuli Irawan for the gold medal. He followed up the flamingo with a successful clean and jerk of 172kg in more conventional style, requiring Irawan to break his own world record in order to have any chance of winning.

Two failed lifts from Irawan later and Li was the champion with a total 313kg. Irawan managed 302kg for silver for his fourth Olympic medal, more than any other Indonesian.

Irawan said it had been hard to compete at his record-setting best after his training was disrupted by lockdowns in Indonesia during the coronavirus pandemic.

Igor Son of Kazakhstan lifted a total 294kg for bronze but had a long wait to be sure of a medal. Competitors from Georgia and Saudi Arabia missed their final lifts before Son could celebrate with his coaches.