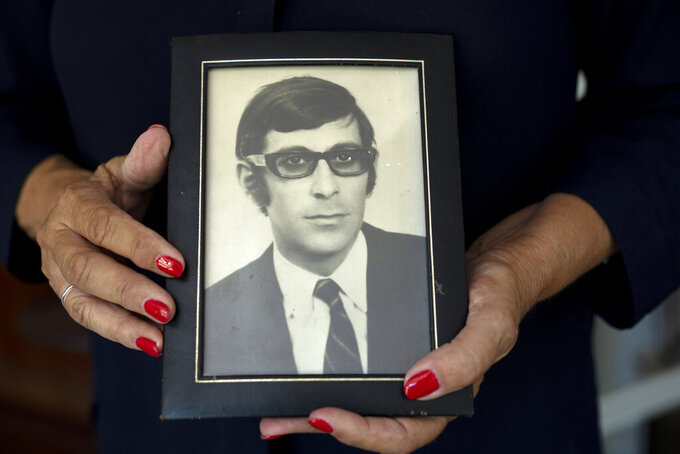 FILE - Ankie Spitzer holds a framed photo her husband Andre had made for the Munich Olympics before his death, as she poses in her home in Ramat Hasharon, Israel, on July 28, 2022. Andre was a fencing coach with the Israeli Olympic team who was killed in the 1972 Summer Olympics in Munich by a Palestinian group. In a decision announced Thursday, Aug. 11, the families of 11 Israeli athletes killed by Palestinian attackers at the Olympics will not attend a 50-year anniversary ceremony organized by German authorities, saying they deserve more compensation and a fuller reckoning of the tragedy. (AP Photo/Maya Alleruzzo, File)

With those three chilling words from ABC sportscaster Jim McKay, the worst possible news was delivered on the fate of 11 Israeli hostages at the Munich Olympics.

Five decades later, it's still hard to shake those images of a masked Palestinian terrorist lurking on the balcony of the Olympic Village. It's still difficult to get one's head around just how senseless and needless it all was.

And then there are those left behind, to live a lifetime filled with hurt in their hearts and questions that can never be answered about why it happened and what might have been.

Like the family of David Berger, a Jewish American weightlifter who joined the Israeli team in pursuit of his dreams and wound up being assassinated.

“We were six years apart," his sister, Barbara Berger, recalled by telephone Friday evening from her home in Maine. “But the year before he died, I spent the summer with him in Israel. He was funny, and headstrong, and goal-oriented, and incredibly intelligent.”

When Barbara had a son, she named him after her brother.

“He looks just like David,” Barbara said, a hint of marvel in her voice. “He reminds me so much of my brother. His personality, his looks. I feel good about it. It feels like my brother does live on.”

The 50th anniversary of the deadliest terror attack ever launched on the world of sports is Monday.

There will be a commemoration in Munich, with the presidents of both Germany and Israel set to attend.

There also will be a ceremony Tuesday at the Mandel Jewish Community Center in Cleveland, site of the David Berger National Memorial, a heart-wrenching steel tribute that depicts the five Olympic rings, each of them broken in half but pointing upward, toward a more peaceful world.

Berger was a Cleveland native who went to high school in Shaker Heights.

“I can say that David Berger is very much alive in our community,” said Traci Felder, chief development officer at the Cleveland center. “As a person, he was about dedication and commitment, not only to sports but to education.”

Felder pointed to Berger's lasting legacy through an education endowment set up by his mother and father.

Over the past five decades, the tragic events in Munich have been remembered with documentaries and movies, with plaques and monuments, and finally, just last year, with a moment of silence at the Tokyo Games.

They also sparked a more locked-down world at our stadiums and arenas, with security costs now accounting for a massive chunk of the budget for any city that wishes to host the Summer or Winter Games.

Of course, there is no chance of totally shutting down those who would do harm to others — especially on the high-profile stage that sports provides — in pursuit of their perverted goals.

A bombing at the 2013 Boston Marathon left three people dead. Three were killed in the 2010 assault on a bus carrying the Togo national soccer team to a major African tournament. In 2009, terrorists opened fire on the Sri Lankan cricket team heading to a match in Pakistan, resulting in the deaths of half-dozen police officers and two civilians, while six Sri Lankan players were injured.

I witnessed the aftermath of another horrific attack.

In 1996, while working in a media center adjacent to Centennial Olympic Park, a bomb went off in the epicenter of the Atlanta Summer Games. One person was killed by the blast; another died later from a heart attack.

It could have been much, much worse.

It was bad enough as it was.

“I felt the ground shake,” Desmond Edwards, an Atlanta schoolteacher who witnessed the blast, told me as he fled the scene on that chaotic night. “There were rivers of blood.”

Sadly, in the 50 years since Munich, we still live in a world with rivers of blood and many of the same grievances that led up to the Olympic massacre.

“I don't think anything good came out of it, given the state of the world today,” Barbara Berger said. “One can hope, but I actually think things are worse.”

Then she utters the saddest possible words from someone who lost a loved one: “I would say he died in vain.”

Even more disheartening, recognition of the carnage and the many mistakes that allowed it to happen moved at an inexcusably slow pace among those in power.

It took 49 years for the International Olympic Committee to acknowledge Munich with something so simple as that brief moment of silence during Tokyo's opening ceremony.

Just this week, the families of those 11 Israeli victims finally reached a deal with Germany's government over a long-disputed compensation claim, averting a threatened boycott of Monday's ceremony.

German President Frank-Walter Steinmeier and his Israeli counterpart, Isaac Herzog, welcomed the long-overdue agreement that reportedly is worth some $28 million.

“The agreement cannot heal all wounds. But it opens a door to each other,” the leaders said in a joint statement.

Then again, the pact came on the heels of Palestinian President Mahmoud Abbas refusing to condemn the 50-year-old Olympic massacre. He countered that he could point to “50 Holocausts” by Israel.

Amid the political grandstanding, we lose sight of the individual anguish on all sides.

The family that has an empty seat at their dinner table. The survivor who is wracked with guilt. The bystander who can never forget what he or she witnessed.

Fifty years ago, Barbara Berger was in Munich along with another sibling, Fred, to watch their brother compete. She remembers asking David to come stay with them after he was done, but he wanted to remain with his Israeli teammates. She also recalls the lackadaisical security that allowed them to visit David in the athletes village.

But Barbara refuses to get caught up in the what-ifs. She saw it eat at her parents for the rest of their lives.

“It's a total waste of emotion,” she said. “I have enough self-discipline not to go there. There's no point.”

Fifty years later, there seems no point to any of it.

Yet we carry on, doing our best to keep their names alive.

Hopefully, their all-too-short lives will someday inspire us to be a better people, a better world.