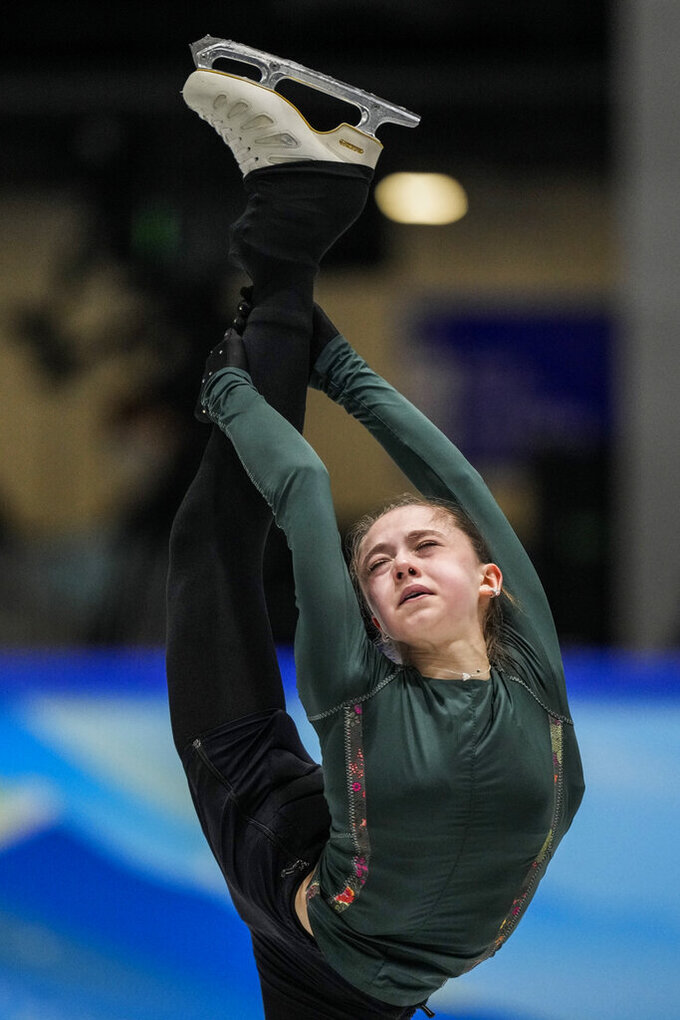 BEIJING (AP) — The decision came down in the midst of a brisk, sunny day in Beijing, after a late-night hearing that stretched into morning.

There was never much doubt about the outcome.

That's the way it goes with the Russians.

They dope. They’re caught. They slink away to the next competition with no real ramifications.

Why would they change their chemically enhanced ways?

If the International Olympic Committee had shown even a hint of a backbone when dealing with the country that ran a massive doping scheme at Sochi in 2014, there probably wouldn’t have been any need for a ruling Monday clearing the way for 15-year-old phenom Kamila Valieva to go for an expected gold medal in women's figure skating with a program that now includes a positive drug test.

If the Russians had been kicked out of an Olympics or two -- the bare minimum they deserved for treating international doping rules with roughly the same seriousness that Nicolas Cage gives to potential movie scripts — they might've been compelled to actually clean up their act before the world’s winter athletes descended on locked-down China.

A good start would've been the 2016 Rio Olympics. Instead, the IOC rejected the World Anti-Doping Agency’s recommendation that Russia be banned from those Summer Games, even after an independent investigation left little doubt the country ran a state-sponsored doping operation of staggering proportions in Sochi.

Two years later, with enough damning evidence to put the Russians on par with the old East German doping dynasty, the IOC responded with a sham punishment that merely required them to buy some new uniforms and compete in Pyeongchang as “Olympic Athletes from Russia.”

Finally, after Russia threw roadblocks in front of every opportunity to come clean about its nefarious ways, the Court of Arbitration for Sport — with the IOC's tacit approval — came up with sanctions in name only for the Tokyo and Beijing games.

Instead of OAR, the Russians have been forced to compete as ROC -- Russian Olympic Committee.

And how did the Russians show their gratitude for the IOC’s leniency? A) Another major doping scandal, or B) All of the above.

The ruling by a hastily assembled CAS panel will permit Valieva to take the ice Tuesday in one of the signature events of the Winter Olympics, a competition that will likely produce her second gold medal of these Games.

Whether she actually gets to keep any medals she wins in Beijing is an issue for another day. The CAS hearing was merely to determine if the teenager should be allowed to compete, which was essentially a slam dunk of a decision because of her age.

Athletes under the age of 16 receive special consideration in the WADA doping code, the thought being that it's the adults in the room who are likely to blame if something illicit winds up in their young bodies.

However well-intentioned that proviso may be, it's an issue that WADA must address at some point to ensure young athletes don't become doping guinea pigs, subject to the whims of unscrupulous coaches, handlers, doctors and nutritionists who know their athletes won't face the same sanctions as older ones if caught.

But the bigger issue is the perception that Russia is being allowed to skate through another doping scandal without any serious consequences.

Valieva already led Russia — uhh, sorry, the Russian Olympic Committee — to a gold medal in team figure skating, becoming the first female ever to land a quad at the Winter Games.

She hasn't yet been able to actually collect her prize, nor have her teammates. Word came shortly before the medal ceremony that a sample collected from Valieva on Christmas Day at the Russian nationals had turned up positive for the banned heart drug trimetazidine.

The CAS panel — and again, this is the right call under the rules as they stand — said Valieva is a “protected person” because of her age and therefore subject to different rules from an adult athlete.

Not surprisingly, there was outrage from the United States and other countries about the ludicrousness of an athlete being allowed to compete at the Olympics when she's known to have tested positive and may eventually be stripped of any medals she wins.

“Athletes have the right to know they are competing on a level playing field.” said Sarah Hirshland, the CEO of the U.S. Olympic and Paralympic Committee, in a statement. “Unfortunately, today that right is being denied.”

She did not mince words about Russia's ever-growing doping resume, either.

“This appears to be another chapter in the systemic and pervasive disregard for clean sport by Russia,” Hirshland said. "We call on everyone in the Olympic movement to continue to fight for clean sport on behalf of athletes around the world.”

The ultimate judgment in Valieva's case will drag on long after the flame is extinguished in Beijing.

A separate, longer-term investigation of the positive doping test will be led by the Russian anti-doping agency, known as RUSADA, and could lead to Valieva ultimately losing whatever medals she wins in Beijing.

We have a pretty good idea how the RUSADA probe will turn out in Vladimir Putin's Russia, but at least WADA has the right to appeal. The world body also wants to take a good, hard look at Valieva’s entourage.

But the damage is done. Valieva can carry on at these Olympics like nothing happened.

“There was a positive test and there is no question in my mind that she should not be allowed to compete,” said 1998 Olympic gold medalist Tara Lipinski, now an analyst for NBC’s coverage of the Beijing Games. “I believe this will leave a permanent scar on our sport.”

At least the IOC had the good sense to cancel any plans for a rescheduled medal ceremony to award the Russians their team gold, though that is hugely unfair to the other countries that made the podium.

If Valieva finishes in the top three in the individual event, the medal ceremony also would be scrapped. “It would not be appropriate,” the IOC said.

There's nothing appropriate about this whole situation, but this is the mess the IOC created by continually coddling Russia.

The short program is Tuesday, followed two days later by the free skate. If things go well for the Russians, they might become the first nation to sweep all three medals in women's figure skating.