From Copa America to Olympics, Richarlison nets 3 for Brazil 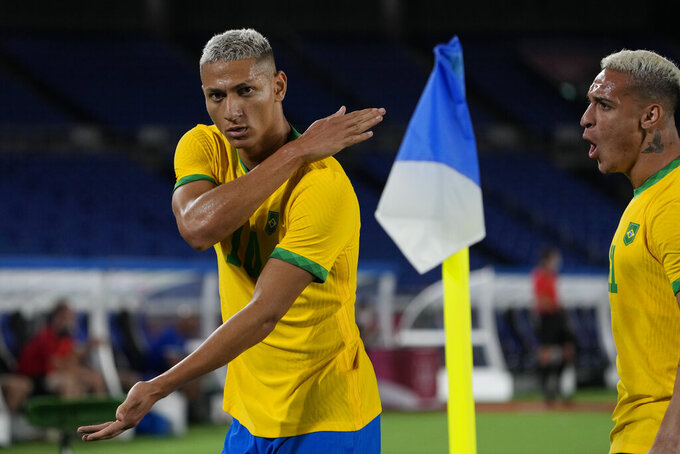 YOKOMAHA, Japan (AP) — The jig of joy seven minutes into his Olympic debut showed just why Richarlison was so determined to be allowed by Everton to come to Japan.

Even if it meant doing double duty with Brazil and extending the season even further and delaying his entry into the new English club Premier League campaign.

Just 11 days after losing the Copa America final to Argentina in Rio de Janeiro and now 10 time zones away with Brazil’s under-23s team, Richarlison scored a hat trick inside the opening half hour against Germany on Thursday.

It helped Brazil open the men's soccer tournament with a 4-2 victory.

And it started in the 7th minute by netting the rebound after his initial shot was blocked by Germany goalkeeper Florian Müller before leading his teammates into a dance.

It needed the players to create as much atmosphere as possible with only artificial crowd noise in Yokohama as the pandemic shut spectators out of this 70,000-plus capacity stadium.

Richarlison didn't wait long to celebrate again — heading past Müller in the 22nd and curling in a third in the 30th.

It was a cushion that ensured Brazil withstood Germany's attempt at a comeback in the second half when Nadiem Amiri and Ragnar Ache reduced the deficit to 3-2. There would be no equalizer with Paulinho's goal deep inside stoppage time completing Brazil's victory.

It gave Brazil the early lead in Group D over Ivory Coast, which beat Saudi Arabia earlier in the same stadium with a 2-1 victory clinched by AC Milan midfielder Franck Kessie.

Two-time Olympic champion Argentina was stunned 2-0 by Australia. In its first Olympic game since 2008, Australia took the lead through Lachlan Wales’ tap-in the 14th minute at the Sapporo Dome.

Argentina had Francisco Ortega sent off after being booked twice late in the first half. Marco Tilio then secured the victory in the 80th, just a minute after coming off the bench.

Australia is top of Group C ahead Egypt and Spain, who drew 0-0 in the other game.

An empty stadium is not how Japanese athletes imagined competing for the first time in Tokyo at their home Olympics.

At least the men’s soccer team opened with a win — a day before the opening ceremony of the pandemic-impacted games.

Takefusa Kubo scored the only goal with a curling strike off the post in the 71st minute that clinched a 1-0 victory over South Africa at the Tokyo Stadium.

Kubo is a 20-year-old forward signed up to Real Madrid who has yet to play for the Spanish giants while gaining first-team experience elsewhere in La Liga.

In the other Group A game, Mexico beat France 4-1 with four second-half goals. Alexis Vega headed in Mexico’s opener in the 46th minute and Sebastian Cordova doubled the lead with a volley in the 55th.

France striker André-Pierre Gignac, who plays in Mexico’s top division with Tigres, pulled one back from the penalty spot in the 69th. Uriel Antuna and Eduardo Aguirre extended Mexico’s definitive lead in the final 10 minutes.

Chris Wood’s goal gave New Zealand a 1-0 victory over South Korea at the Ibaraki Kashima Stadium where a few hundred fans were permitted because it is just outside Tokyo and not in the same state of emergency as the capital.

The 29-year-old Wood is one of New Zealand’s three overage players permitted in a squad comprised largely of players under the age of 23.

In the other Group B game, Romania also beat Honduras 1-0.