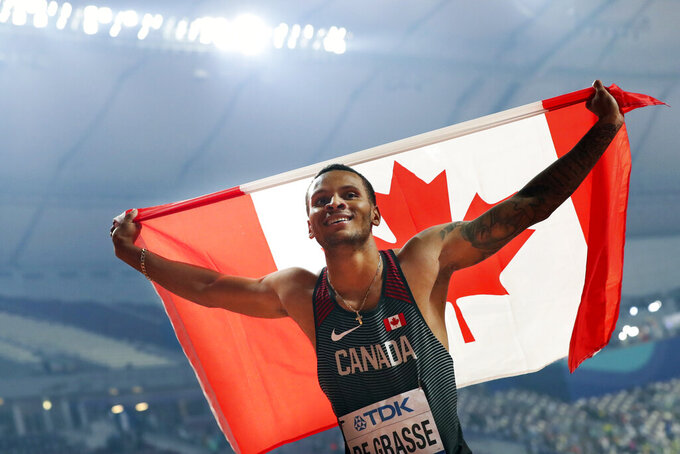 FILE - In this Tuesday, Oct. 1, 2019, file photo, Canada's Andre De Grasse celebrates after winning the silver medal in the men's 200-meters at the World Athletics Championships in Doha, Qatar. Stunned at first, sprinter Andre De Grasse said he understands Team Canada's decision to not send a team to the Tokyo Olympics due to the coronavirus pandemic unless they were delayed a year. (AP Photo/Hassan Ammar, File)

Andre De Grasse intends on being a major part of the sprint show at the Tokyo Games.

But only if it's postponed by a year.

Otherwise, Canada's fastest man won't be allowed to take to the starting line, even if he wants to.

Stunned at first, De Grasse told The Associated Press he understands Team Canada's decision to not send a team to the Olympics due to the coronavirus pandemic unless the games were delayed a year.

"It's going to be a bummer and a disappointment if the Olympics went on without us," said De Grasse, who has seven Olympic and world championship medals to his credit. "Having the Olympics (in 2021), that's all I can really hope for moving forward."

The 25-year-old who lives and trains in Jacksonville, Florida, was cleaning his house when he happened to check his phone and see the news Sunday night.

He didn't sleep much.

This was supposed to be his year — his first chance for Olympic gold without Usain Bolt looming a few steps away. Only now a new crop of talent has arrived on the scene in Americans Christian Coleman and Noah Lyles.

It's shaping up to be quite a showdown. Potentially, anyway.

Canada joined a number of countries — including Norway, Brazil, Australia and Slovenia — that have pressed the International Olympic Committee on a possible postponement. But Canada made the strongest statement of all by flat-out saying it wouldn't go if the games start when they're scheduled on July 24.

The IOC said it would take up to four weeks to consider alternatives, including postponement, which is becoming more and more likely with every passing day and more reports that the number of illnesses are skyrocketing in certain parts of the world.

De Grasse is, by most measures, Canada's highest-profile summer sports star. The country brought 314 athletes to the Rio Games in 2016. It captured 22 medals, with De Grasse bringing home three.

Although De Grasse wasn't contacted individually by Team Canada in regard to its decision, he did receive a survey.

He didn't fill it out.

“I didn't know how I felt about the situation at the time,” De Grasse explained. “I was letting it go and playing it by ear day-by-day and seeing if this things got better.

"They're trying to protect us. We're humans first and athletes second. We'll get through this.”

These days, he's in Florida with his girlfriend, American hurdler Nia Ali. His workouts, now that cities and states are closing gyms and urging social distancing, have been reduced to running on a soccer field and chasing around their daughter, Yuri, who turns 2 in June. Ali also has a son, Titus.

“I'm with the kids, at home, a lot,” De Grasse cracked. "I feel like I'm active because I'm chasing them around. We go swimming in the backyard."

De Grasse didn't take the most conventional route into the world of sprinting. In fact, he thought his path to glory was as a point guard in basketball.

That changed when he bumped into a friend on the bus in high school. He boasted he could beat him in a race.

Wearing baggy basketball shorts and borrowed spikes, De Grasse started from a standing position instead of uncoiling from the blocks.

A coach, Tony Sharpe, happened to see him from the stands, took him under his wing and helped fine-tune that raw speed.

De Grasse burst on the scene in 2015, when he tied for the 100-meter bronze medal at the world championships in Beijing. Back then, he was just a role player in the showdown between Bolt and American rival Justin Gatlin.

A year later at the Rio Games, De Grasse took center stage and clowned around with Bolt, though it wasn’t all fun and games. Bolt was looking for the world record, possibly to even break the 19-second barrier in the 200. He fell short, and among the reasons he cited was De Grasse’s decision to push him the night before in the semifinals.

De Grasse ended up earning silver during the 200 in Brazil, along with bronze medals in the 100 and as part of the 4x100 relay team.

He occasionally watches his Olympic races — for inspiration.

“There's a lot of motivation to say to myself, ‘I can be one of the fastest men in the world,'" De Grasse recounted. “When I watch, it fuels that and makes me hungry to win again and have that feeling that I felt in Rio.”

Bothered by hamstring injuries in 2017 and in ‘18, he flashed his familiar — and fast — form at the world championships last fall in Doha, Qatar. De Grasse took bronze in the 100 behind Coleman and Gatlin. Later, he picked up silver in the 200 behind Lyles.

A rematch in Tokyo?

“I'm hoping," De Grasse said, "I will still be able to get that chance.”