DeChambeau, Rahm out of Olympics after positive COVID tests 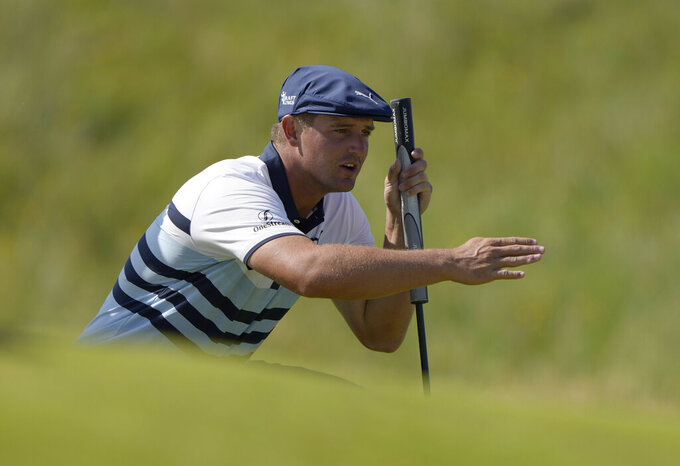 FILE - In this July 17, 2021, file photo, United States' Bryson DeChambeau gestures as he lines up his putt on the 2nd green during the third round of the British Open Golf Championship at Royal St George's golf course Sandwich, England. DeChambeau has tested positive for COVID-19 before leaving the United States for the Olympics and will miss the Tokyo Games. He’ll be replaced by Patrick Reed. (AP Photo/Alastair Grant, File)

TOKYO (AP) — Known for their towering drives, Bryson DeChambeau and Jon Rahm won't make it to the tee box at the Olympics.

The past two U.S. Open champions became the best-known athletes to drop out of the Tokyo Games on Sunday after testing positive for COVID-19.

DeChambeau's positive came before he left the United States for Tokyo. The musclebound American famous for his game-changing swing speed will replaced by Patrick Reed.

“I am deeply disappointed not to be able to compete in the Olympics for Team USA,” DeChambeau said in a statement. “Representing my country means the world to me and it is was a tremendous honor to make this team.”

Rahm was flagged for COVID-19 for the second time in two months — he had a six-shot lead at the Memorial in early June when he was forced to withdraw because of a positive test. The Spaniard said he had gotten his final vaccine shot fewer than 14 days before that positive.

Several dozen Olympic athletes have tested positive either before leaving for Tokyo or after they arrived. Last week, U.S. tennis player Coco Gauff also tested positive before she left the United States.

Reed was scheduled to undergo testing Sunday and Monday to clear himself to compete in Tokyo. The the first round of the men’s tournament at the Kasumigaseki Country Club is set for Thursday. He will join Justin Thomas, Collin Morikawa and Xander Schauffele on the four-man U.S team.

Spain said it would not seek to replace Rahm, leaving Adri Arnaus as its only player in the men’s tournament, which starts Thursday at Kasumigaseki Country Club outside of Tokyo.

The U.S. men's basketball team lost in the Olympics for the first time since 2004, dropping its tournament opener against France 83-76.

Evan Fournier's 3-pointer with just under a minute left put France ahead to stay, leaving the Americans' quest for a fourth consecutive gold medal in serious trouble. France also knocked the U.S. out of contention in the Basketball World Cup two years ago.

The U.S. had won 25 consecutive Olympic games, last losing at the Athens Games 17 years ago and settling for a bronze medal there.

The loss doesn’t knock the U.S. out of medal contention, but it essentially eliminates the margin for error. The Americans play Iran on Wednesday and then the Czech Republic on Saturday in its final two Group A games; win both of those, and the U.S. will be in the quarterfinals. Lose another one, and the Americans might not even finish in the top eight of this 12-team tournament.

No Michael Phelps, no problem for U.S. swimming.

The powerhouse Americans collected six medals — including a gold for Chase Kalisz in the 400-meter individual medley — in the first session of finals. During Phelps’ record-setting career that spanned five Games, the U.S. never won that many medals in the first batch of events.

“A pretty good start for the U.S.,” said Kieran Smith, who in his first major international meet snagged a bronze in the men’s 400 freestyle. “We executed today. I’m really proud of us.”

Kalisz got things going with the country’s first medal in any sport, with teammate Jay Litherland making it a 1-2 finish for the U.S. by rallying on the freestyle leg to claim silver. Emma Weyant and Hali Flickinger took silver and bronze in the 400 IM, and the women’s 4x100 freestyle relay team finished third.

In the 400 free, 18-year-old Ahmed Hafnaoui of Tunisia beat a field of faster and older swimmers. He finished in 3 minutes, 43.26 seconds, punctuating his victory with loud yelling that echoed in the mostly empty 15,000-seat arena.

“I was surprised with myself,” said Hafnaoui, who joined Ous Mellouli as a gold medalist from the north African country. “I couldn’t believe it until I touched the wall and saw the 1 (on the scoreboard).”

Simone Biles and the U.S. women's gymnastics team trailed the Russians after qualifying in the team event, the first time in a decade they've failed to finish atop the standings during any portion of a major international event.

Biles led the field in a bid for her fifth gold medal, but the U.S. team has work to do to repeat as Olympic champions. The ROC had a score of 171.629 through the first three subdivisions at the Ariake Gymnastics Centre, ahead of the second-place Americans' 170.562.

Biles was the best in the gym but shaky by her standards. She stepped all the way off the mat following a tumbling pass on her floor exercise, then basically did the same on vault. She responded with a solid set on uneven bars, but a spectacular beam routine ended with her taking three major steps backward following her dismount.

Jordan Chiles had a major mistake on bars and a fall on beam. Sunisa Lee overcame a so-so performance on floor to surge into second behind Biles with an electric bar routine.

The team final is scheduled for Tuesday night.

Naomi Osaka got back on the court — and back in front of reporters' microphones — for the first time since withdrawing from the French Open in May to take a mental health break.

The Japanese superstar who lit the Olympic cauldron defeated 52nd-ranked Zheng Saisai of China 6-1, 6-4 in her opening match.

Osaka revealed in May that she has dealt with depression and stopped talking with reporters, saying the experience gave her “huge waves of anxiety.”

She said she was “happy” that journalists were asking her questions, then added: “I feel a little bit out of my body right now.”

“More than anything else I'm just focused on playing tennis," she added.

Hifumi triumphed in the men’s 66-kilogram category shortly after Uta won the women’s 52-kilogram division at the Budokan.

Hifumi won all four of hits bouts Sunday, including over Georgia's Vazha Margvelashvili by ippon in the final. Uta beat Amandine Buchard of France to win her own first Olympic gold.