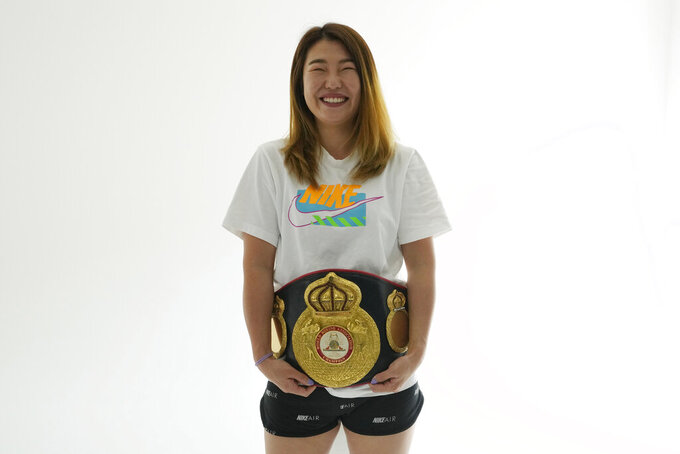 WBA woman super featherweight champion Choi Hyunmi smiles during an interview in Seoul, South Korea, on June 21, 2021. South Korea’s only boxing world champion is Choi, a North Korean defector who fled her authoritarian homeland as a 13-year-old girl with her family in 2003. (AP Photo/Ahn Young-joon) 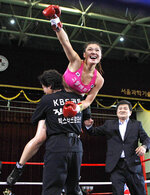 SEOUL, South Korea (AP) — As a child in an authoritarian, socialist country, Choi Hyunmi's athletic talent was spotted early and her progress accelerated by a coach keen to impress the leader of North Korea.

After packing the gloves away when her family defected to the South, it was boxing that helped her two years later after she faced discrimination.

Nearly two decades after fleeing North Korea as a 13-year-old girl, Choi is South Korea’s only boxing world champion. She harbors ambitions to unify her super featherweight division and to move up a weight to challenge Irish legend Katie Taylor, who is one of the best pound-for-pound boxers in the women's ranks.

Choi’s big push got off to a rocky start, when her planned unification bout with WBC title-holder Terri Harper in May was cancelled because of the British boxer’s hand injury.

Still, what the undefeated WBA champion has already achieved makes her a great ambassador for North Korean defectors in South Korea.

“What I wish now is letting the world know there is Choi Hyunmi in Republic of Korea,” Choi said in an interview with The Associated Press, referring to South Korea’s official name. “I might have got some basic mental (toughness) in North Korea, but what has made me who I’m today is Republic of Korea.”

Choi began boxing at 11 when she lived in Pyongyang, the North Korean capital. She said a school coach noticed her athletic ability and told her parents that she could become a boxer who “can delight General Kim Jong Il,” the late father of current leader Kim Jong Un. She later joined an elite youth boxing program preparing for future Olympics.

But in late 2003, her family left North Korea because her father Choi Yeong-chun, who had worked for a state-run trading company, wanted a different life for his children. They moved to South Korea via Vietnam, only to face poverty and discrimination like many other defectors whose qualifications in North Korea largely aren’t recognized in the South.

Choi went back to boxing after a classmate insulted her North Korea background following an accidental collision at school.

“She cursed me, telling me ‘You should have stayed in North Korea. Why did you come here and bump into me?‘” Choi said. “It deeply hurt me. I couldn’t show my temper because I was hurt too much ... I just stood helplessly and I didn’t go to school for a week.”

Determined not to be denigrated again, she chose boxing knowing it gave her a chance to build up a successful professional career.

It was a wise choice.

She became a member of South Korea's national team in 2006 before turning pro and clinching the World Boxing Association's vacant featherweight crown in 2008. After defending the title seven times, Choi jumped up a weight division and added the WBA super featherweight title to her collection in 2014. She’s defended that title eight times.

But the sport’s declining popularity in South Korea left Choi with a lack of sponsorships, to the point where she even considered surrendering her title. Choi’s father visited politicians and officials and wrote a letter to the presidential office seeking help.

“My daughter trained so hard but the fact that we lacked domestic sponsors was the most difficult thing that we’ve had to deal with,” he said.

Agents from the United States, Japan and Germany have made approaches about Choi being naturalized in those countries. But the 30-year-old boxer said she’s rejected the offers for two reasons: worries about another tough resettlement, and the immense pride that she’s had representing South Korea.

She recalled the “really hard time” she had initially settling into South Korea and wasn’t sure it would be different anywhere else.

“Also, nothing can surpass the feeling and pride that I felt when I had taekukgi (the national flag) on my chest as a national team member,” she said.

An estimated 34,000 North Koreans have moved to South Korea in search of better lives, mostly in recent decades. But many have experienced economic difficulties and discrimination in schools, workplaces and elsewhere. Some defectors even call themselves second- or third-class citizens.

Jeon Ju-myung, who runs an association for defectors in Seoul, said many defectors “are very proud of Choi” and her inspirational story “has absolutely made positive effects on our resettlement here.”

Choi, who occasionally appears on TV shows, doesn’t face the level of severe difficulties that other defectors have to deal with. But she still dislikes labels associated with her North Korean origin, such as “defector boxer” or “defector girl boxer,” that tend to preface her championship title in media stories.

“I’ve come to this stage after crying and enduring the hardships. But how can the word ‘defector’ come before my champion title?” she said. “I’m the proud world boxing champion of Republic of Korea and want to let the world know about it, but I feel so bad because (the defector label) overshadows that.”

“She’s very strong mentally, maybe because she risked her life to come to South Korea," Hwang said. “Her professional perseverance is really good and she has a considerably good stamina too.”

Now with an American boxing agency, Choi trains mostly in the United States, where she thinks she could become “an even greater boxer.”

Choi isn’t sure when her match with Harper can be rearranged. But she said within three to five years she aims to combine the WBA title with the three other major belts — WBC, IBF and WBO — in her division.

Then, her final objective is posing a challenge to Taylor.

“Win or lose, if I take on the boxer who I view as the world’s best, I’ll be satisfied with myself when I retire because I’d think I’ve fought without any regret,” Choi said. “So that’s why I’d like to make another challenge.”