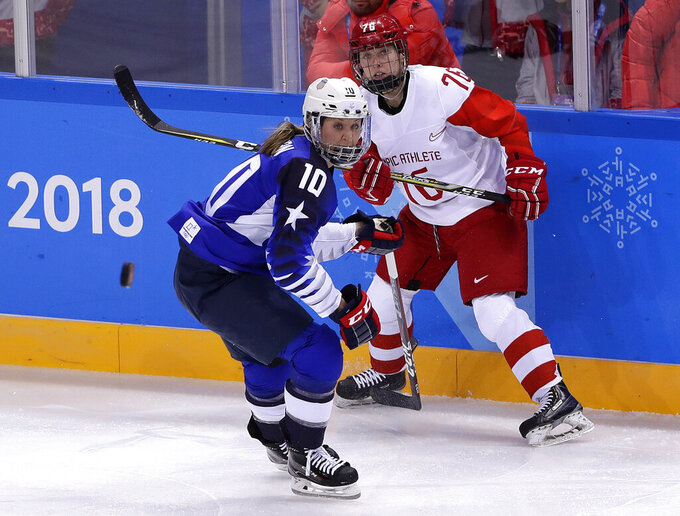 FILE - Meghan Duggan (10), of the United States, and Russian athlete Yekaterina Nikolayeva (76) chase the puck during the first period of the preliminary round of the women's hockey game at the 2018 Winter Olympics in Gangneung, South Korea, in this Tuesday, Feb. 13, 2018, file photo. Former U.S. national team captain Meghan Duggan was named manager of player development for the New Jersey Devils on Wednesday, May 19, 2021, the latest prominent women's hockey player to join an NHL team's front office. (AP Photo/Frank Franklin II, File)

Duggan joins fellow Americans Kendall Coyne Schofield and Cammi Granato and Canadian rivals Hayley Wickenheiser and Danielle Goyette in NHL coaching or management jobs. Coyne Schofield joined Chicago in November as player development coach, Granato is a scout for Seattle and Goyette this week joined Toronto as director of player development when Wickenheiser was promoted to senior director in that department.

“It’s important and it’s exciting that a lot of these organizations are starting to see value in that diversity of experience, diversity of thought and perspective and what a variety of backgrounds can bring to an organization,” Duggan said by phone. “Kudos to the New Jersey Devils and a lot of the other organizations in the National Hockey League that are valuing this different perspective from someone that played in the women’s game.”

The Devils said Duggan will work with assistant general manager Dan MacKinnon in a variety of roles. Duggan expects to do “a lot of different things” in hockey operations and also get on the ice to help with skills training.

“Her successful track record as a teammate, leader, captain and driver of initiatives will be resources to all players in our organization,” GM Tom Fitzgerald said. "We look forward to her utilizing her perspective of the game, attention to detail and creative thinking to help our players reach their potential.”

Duggan retired in October and at 33 is older than every current player on the Devils roster.

“Just coming out of the game myself, I can hopefully relate to some of the players in a variety of different ways,” she said. “There’s a lot, hopefully, from my background playing at an elite level for so long from an on-ice perspective that I can bring and then help them in any area that they need.”

NHL teams have trailed the other major North American professional sports leagues in hiring women for executive operations positions, but Duggan said she believes team officials are "thinking outside the box a little bit and starting to value being more inclusive of some underrepresented groups.”

When Granato joined Seattle's expansion franchise in 2019, she was the first woman to get an NHL pro scouting job. Granato has mentored Duggan for years.

“We’ve had multiple conversations about her role, about just her challenging me to think about things in different ways and think about what I really want,” Duggan said. “She’s given me lots of courage and confidence to really start figuring out what I wanted and where I can add value.”