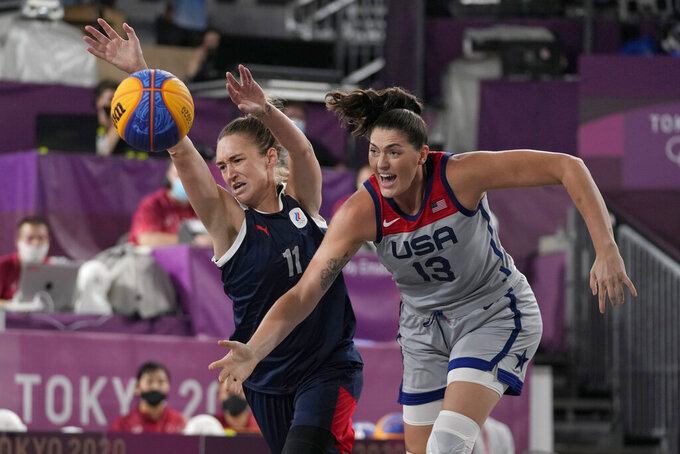 I woke up this morning and looked over to the table and saw my gold medal and I just smiled. As a young girl I watched and dreamed of being in the Olympics and winning a gold medal, but this is far beyond what I ever imagined.

Starting with how much heavier the medal is than I thought it would be. It actually hurts my neck to wear it, but that said, I definitely will be wearing it all day today.

It was an unbelievable feeling to know we just won a gold medal. And to be the pioneers of 3-on-3 and make history is something that I will always remember.

People asked me to compare it to winning a national championship and they are both really special. The celebration part of it is the same. The feeling of knowing you’re the best and how hard you worked to get there.

We worked for this and coach Kara (Lawson) had said that it would be harder than you could ever imagine to win. There’s also expectations with USA Basketball that it’s gold or bust. Well, we took the gold!

I have to give a shoutout to Tokyo, they did an incredible job making it feel special. The whole atmosphere leading up to the gold medal game was great starting with the giant drum they were banging during introductions. Tokyo did an amazing job of creating an environment in the middle of the coronavirus outbreak that made it feel huge.

The energy in the building was awesome. I can only imagine what Olympic 3-on-3 will be like when there are fans there.

The games themselves were nerve-wracking. We beat France in a tough one in the semifinals to advance and then won a hard-fought game with Russia. Going into the finals, we knew how physical Russia would be and we were ready for it. We played amazing defense and then when the final buzzer sounded it was like, holy cow we won.

Because of COVID protocols, they had us put the medals around our own teammates necks. Being the tallest of the group, I was chosen for that honor.

After the ceremony I had the pleasure of meeting Yao Ming, who was there cheering on the Chinese team that won the bronze. He asked me who I played for and I told him he had an incredible career. He couldn’t have been nicer and more gracious to take a photo with me.

I must say, he is tall, I’ve never felt that short before!

While we were waiting for the press conference I had a chance to call my family and share this with them since they’ve been such a big part of my basketball experience. It was so cool. My niece was there and obviously my mom was especially excited — one could say embarrassingly excited. I had so many texts from former coaches, teammates and even high school teachers I hadn’t talked to in 10 years.

We got back to the hotel late, around 2 a.m., and wow did USA Basketball make us feel special. Many of the 5-on-5 players were up and waiting for us to celebrate and have some champagne!

Now I’m headed back stateside soon with my medal and a lifetime of memories.

Thanks for following along on my journey.

Chicago Sky star Stefanie Dolson is checking in periodically from the Olympics. She was part of the U.S. 3-on-3 team that won a gold medal in the inaugural competition in that event at the Tokyo Games.