East champs no more, the Heat start to look to what's next 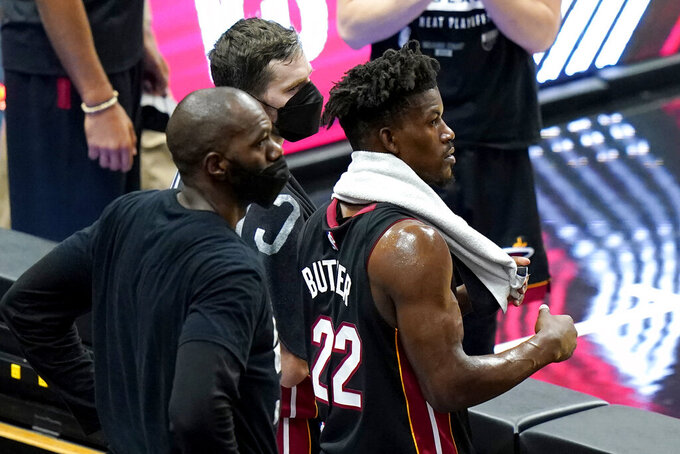 MIAMI (AP) — Not even an hour into the offseason, Jimmy Butler was already looking ahead.

There was no run to the NBA Finals this year for the Miami Heat, not even a single playoff victory for the team that rolled through the Eastern Conference in the restart bubble at Walt Disney World last summer. And when it was over, when Miami’s four-game ouster by Milwaukee was complete, Butler quickly summed up the offseason plan.

The Heat don’t have a pick in this year’s draft, at least for now, and likely will have somewhere around $25 million in cap space that they can choose to use this summer.

Plenty of decisions need to be made about the roster for next season, but the clear cornerstones — Butler and Bam Adebayo, whose $163 million, five-year extension begins this fall — are among the selling points to free agents. Among those who’ll likely be considered, assuming he decides to look for a new team: Toronto’s Kyle Lowry, who insists that he wants to be part of more championship runs wherever he is.

“Definitely want that feeling again of getting back to the finals,” Adebayo said.

There were no shortage of moments that the Heat can point to with regret this season.

They lost 10 games to teams that didn’t end up making the playoffs, lost nine games they led by double figures and were wildly inconsistent. They won 11 out of 12 games in one stretch, then immediately dropped six in a row. And COVID-19 was another issue; Butler tested positive and missed 10 games, a stretch where the Heat went 2-8.

“This was one of the more memorable seasons just because it was so uniquely different than anything else we’ve experienced,” coach Erik Spoelstra said. “Guys had to really adjust and adapt and I really commend our guys for doing that and not becoming cynical or making excuses for all the different protocols and things outside of just the competition.”

Even after a season of near-constant adversity, the Heat missed having home-court advantage in Round 1 by just one game in the standings. They’re nowhere near where they want to be — it’s always about contending for titles in Miami — but they believe this summer’s work on the roster won’t require a major overhaul.

“I’m appreciative that we get to call this our job, play the game that we love, being around people we enjoy being around,” Butler said. “Maybe it’ll be a little bit different next year, next season, but for this year it was fun. Through the ups and through the downs, nobody complained. You just go out there and compete, play hard, and I think we did that for the most part.”

Some of what to watch for as the Heat enter the offseason:

There would seem to be a reasonable chance that Miami and Butler work out an extension this summer. He’s got two years left — the second year at his option — on his original four-year deal with the Heat, and with Adebayo signed for the next five seasons, taking care of Butler for future years figures to be high on the list of priorities.

Victor Oladipo long wanted to play in Miami, and the Heat finally got him in a trade-deadline deal. He appeared in four games before having to shut down and finally get another surgery on the leg he injured in 2019.

He won’t be ready for the start of next season — provided things start on time, at least — and it’s still unclear when he could play again. Having surgery in May means a return isn’t likely until November at the earliest. He passed on a $45 million, two-year extension from Houston and enters free agency with the market unclear, given the uncertainty on when he’ll play again.

Duncan Robinson is Miami’s single-season 3-point record-holder and one of the best in the league from beyond the arc, and Kendrick Nunn has started 111 regular-season games primarily at point guard in his two Miami seasons. Both are restricted free agents, and what Miami does with its qualifying offers is something to watch this summer.

Other than Udonis Haslem (whom the Heat would warmly welcome back for a 19th season), Goran Dragic is Miami’s longest-tenured player and the Heat hold a $19 million option on him for next season.

Dragic is 35, but his per-36-minute averages this season — 18.1 points, 4.6 rebounds, 5.9 assists — are roughly the same as the numbers he had during his lone All-Star season in 2017-18. Bringing him off the bench over the last couple of years might have extended his career.

Andre Iguodala has a $15 million team option for next season; he spent much of this season dealing with a balky hip yet was still effective in his role, and Spoelstra raves about him. Also, the 2021 NBA Finals will be the first since 2010 that do not have either the Heat or Iguodala taking part.

Butler, Adebayo and Robinson are among the 57 names under consideration by USA Basketball for the team that it’ll take to the Tokyo Olympics. The U.S. team, to be coached by Gregg Popovich, will gather in Las Vegas for training camp in early July to start getting ready and play some warm-up contests.

Butler was part of the team that won gold for the U.S. at the Rio de Janeiro Games in 2016. Asked if he’s thinking about playing in Tokyo, Butler sounded undecided.

“That’s a good question,” Butler said. “That is a very good question. It’s not out of my mind just yet, but we definitely will see. I don’t know."