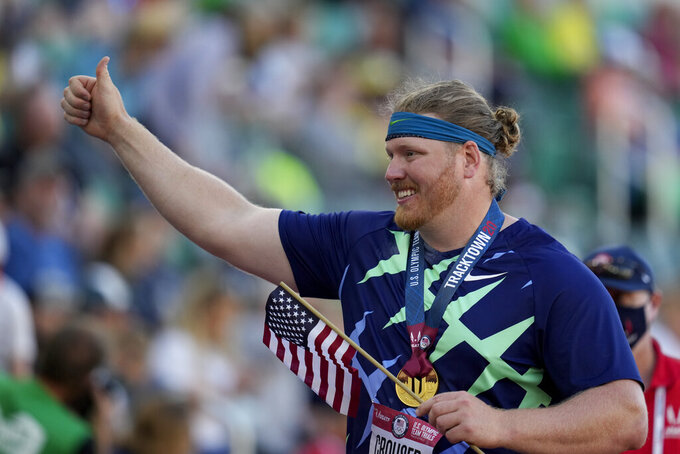 Ryan Crouser celebrates during a victory lap, after setting a world record during the finals of men's shot put at the U.S. Olympic Track and Field Trials Friday, June 18, 2021, in Eugene, Ore. (AP Photo/Ashley Landis)

EUGENE, Ore. (AP) — The typical celebration for many athletes who qualify for the Olympics revolves around one thing: food.

Months, sometimes years, of strict diets are geared toward the goal of making the games. And when they get there, it’s time to celebrate.

After his win in the 400 meters at the U.S. track trials last weekend, Michael Norman was thinking big.

“Barbecue sounds good to me,” he said.

He had grand plans to head to one of his favorite BBQ joints for a slab of pork ribs with a side of seasoned rice — and some steamed broccoli, just to keep it somewhat healthy.

Teahna Daniels craved pizza after taking third in the women’s 100. But she’s got more competition scheduled for this week in the 200.

Then there’s Javianne Oliver, who was second in the 100, and didn’t really have a food plan other than: “I’m starving. So I’m going out to dinner with my coach.”

On the other hand, shot putter Ryan Crouser hasn’t had to push away from the buffet too much over the years. One of the main goals for the 320-pound defending Olympic champion has been keeping weight on his 6-foot-7 frame.

But after setting the world record Friday night, then being swamped with obligations that kept him at the track late into the evening, he knew options would be limited.

He tried football but didn't catch on.

He tried the finance route, too.

Nothing quite got Garrett Scantling going like one of the most grueling event in sports — the decathlon.

Now, the 28-year-old from Jacksonville, Florida, is heading to Tokyo, hoping to cement his name alongside some of the American greats of the past.

“It’s a very rich tradition,” Scantling said of the decathlon. “I am following in the footsteps of some of the best athletes and best humans on the planet.”

Scantling finished an excruciating fourth at the 2016 trials, and after missing the team by one spot, decided to try something else.

He got tryouts as a receiver with the Atlanta Falcons and Jacksonville Jaguars. Neither worked out. He also had a stint as a financial advisor.

Both experiences pointed out the obvious — he really did miss decathlon.

Arriving at trials, Scantling had a conversation with Ashton Eaton, who retired after winning his second Olympic title in 2016. Eaton told him to rely on experience, which led Scantling to Sunday's result — the first-place finish at the trials.

“It’s my dream and I’ve been chasing it a long time,” Scantling said. “The fact that it’s real hasn’t sunk it yet.”

Possibly the most touching scene over the first four days of the U.S. track trials was that of sprinters Allyson Felix and Quanera Hayes introducing their 2-year-olds to each other down on the track.

“Hey, we're going to Tokyo,” Felix said after she finished second to Hayes in the 400-meter final.

While Felix struggled with an emergency C-section that threatened both her and her baby's life, Hayes endured a different sort of struggle with her son, Demetrius.

She sent Demetrius to visit his grandparents in the Bahamas in early 2020. Then, the COVID-19 pandemic broke out, the Bahamas shut down travel and Hayes went four months without seeing her son.

“Worst experience of my life,” Hayes called it. “We'd call each other on Facetime and when I'd get off Facetime, I'd go and cry. He was growing up and learning stuff without me. It was moments you don’t want to miss as a mom.”

Of all the things she learned, both on and off the track, in returning to top form after pregnancy, maybe this was the most important: “If I can't drive to (get) him, he cannot go anywhere without me,” she said.

Though she finished a surprising 10th and failed to qualify for the women's 1,500, after Monday's final, Jenny Simpson kept a promise she'd made earlier in the week to weigh in on the Shelby Houlihan doping case.

Houlihan, the American record holder at the 1,500 and 5,000 meters, received a doping suspension last week for testing positive for the performance-enhancer nandrolone. She claims it came from tainted pork she ate in a burrito. Houlihan and Simpson were expected to be among the top contenders for Olympic spots in the 1,500. Neither will be in Tokyo.

Simpson, the only woman to win an Olympic medal at 1,500 meters, said she knew little about the specifics of the case, but trusted in drug-testing organizations to adhere to the rules.

“None of these things are popularity contests,” Simpson said. “That's why we have drug testing where a lab makes a determination of what's in your blood. At the end of the day, track and field is not a popularity contest, and I'm in favor of it that way.”