From the Emperor on down: Memories of the '64 Tokyo Olympics 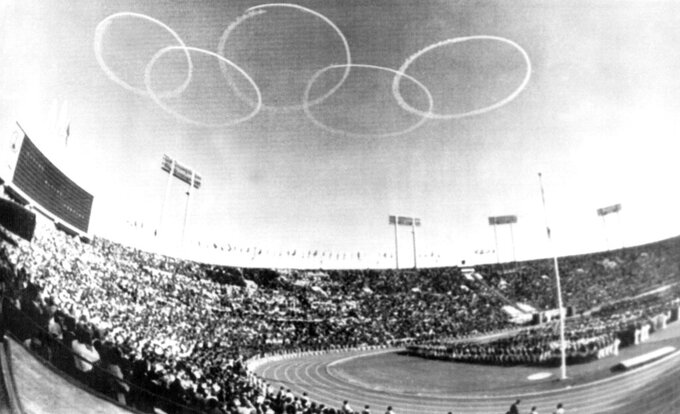 FILE - In this Oct. 10, 1964, file photo, vapor trails from Japanese Self-Defense Force jets form the Olympic emblem of the five rings above the National Stadium in Tokyo for the official opening of the XVIII Olympiad, first even held in Asia. Every Japanese of a certain age has memories of the 1964 Tokyo Olympics. Even younger Japanese have connections through parents or aunts and uncles who saved old photos, faded certificates, or recall getting a television for the first time to watch the Games. (AP Photo, File)

TOKYO (AP) — From Emperor Naruhito on down, every Japanese of a certain age remembers the 1964 Tokyo Olympics. Even younger Japanese connect through parents or aunts and uncles who stored old photos, told stories or recalled getting a television set for the first time to watch the Games.

These were the first Olympics broadcast live using satellites and the last to be run on a cinder track; a bridge between older Olympics and the modern.

There are recollections of new bullet trains, urban expressways going up — not all of them completed for the Games — and complaints about cost overruns, just like today.

Emperor Naruhito, whose grandfather Emperor Hirohito opened the Games, has his own memories. He was a 4 1/2 year-old child at the time and reminisced last week with guests, including American first lady Jill Biden.

“I myself have a lasting memory of the closing ceremony of the 1964 Tokyo Olympics, where athletes from different countries paraded together shoulder to shoulder, not divided by country,” the emperor said.

American Robert Whiting arrived in Tokyo in 1962, has lived in the Japanese capital for 43 of the last 59 years and has written several books about Japan. The latest is “Tokyo Junkie,” which traces the growth of the city and his own maturity.

“Historians call the '64 Tokyo Games the greatest urban transformation in history. So it’s hard to idealize something that had such a profound effect," Whiting said in an interview. “The city was completely remade from a polluted backwater that nobody wanted to visit to this high-tech megalopolis where the James Bond people came to film a movie. There was the physical transformation of the city, but also the psychological boost that it gave the Japanese.”

A few of the memories.

KATSUSHIGE NISHIMURA — He was a superstar in 1964. Nishimura was a 28-year-old pilot flying with the Blue Impulse aerobatic team that sketched out the five Olympics rings during the opening ceremony in the sky above Tokyo.

“Our leader came up with the idea of depicting the five rings, and we trained for about a year,” the retired Japan Airlines pilot told the AP. “It’s very difficult for five planes to draw five rings. There was no radar back then to rely on for each of us to set the right speed and keep the right distance apart.”

He added: “I was the third pilot who drew the black ring.”

He said the air-sketch took about 40 seconds, and he knew the pressure was on.

“It was about the rebirth of Japan after the war, and how the nation was rebuilding. We couldn’t mess up. We also knew the air forces of the world would be watching. After we finished, we flew up higher and turned upside down to see what we had done. I saw the stadium and the five rings all the same size and all the same shape. Perfect.”

MARIKO NAGAI — She was a university student who worked as an interpreter at the swimming venue where American Don Schollander won four gold medals.

“It wasn’t actually an interpreter’s job,” joked Nagai, who has built a career since then interpreting for Japanese prime ministers and American presidents, and is working as an English-Japanese interpreter in these Olympics.

“It wasn’t even an interpreter, it was only making announcements in English,” she said. “I would be sitting at the announcer’s desk together with the Japanese announcer. The results would come and I would read the result in English.”

She also did introductions.

“In the first lane, Mr. So-And-So from the United States. In the second lane — something like that.”

“I thought it was the greatest fun I could ever have as a student,” Nagai added. “It was the Olympics, I was working as a helper and I would get paid. I was given a uniform and everything — the blazer coat, the skirt, handbag, shoes and everything. It was fun. It was really fun."

SETSUKO WATANABE — She grew up in the Tokyo neighborhood near the old National Stadium, and she recalls watching the opening ceremony in 1964 from the rooftop of her building.

"I could clearly see the stairs leading up to the cauldron and the torchbearer going up the stairs and lighting the flame,” Watanabe said in an interview with the AP.

The torchbearer who lit the cauldron was Yoshinori Sakai, a 19-year-old at the time who was born in Hiroshima on Aug. 6, 1945 — the same day the Americans dropped the atomic bomb on the city.

She also recalled the performance of the Blue Impulse, the aerobatic team that painted the five Olympic rings in the sky.

“Back then I was a junior high school student and there was a lottery at school and those who won could go see the Games. I was the last one to pick in the lottery as my family name Watanabe was very end in Japanese alphabetical order, but surprisingly I won.”

SEIICHI KUROKI — His father, Masatoshi Kuroki, was a marshal at the opening ceremony of the ‘64 Games. He said he knew nothing of his father’s experience until Tokyo was named the host this time and the subject came up.

“This Olympics have given me the opportunity to discover many things about dad for the first time, and I am very grateful for that,” he said. “Really, without this, I might not have known all these details, and I am glad that I do.”

In an interview, he showed off a name tag and patch — with the famous Rising Sun logo — that his father wore. He also displayed a certificate of appreciation from Games officials.

“He looks happy when I ask him questions such as what were you doing then at the Games, because that is like his legacy," he explained.

SHUNICHI SEKIGAWA — A retired elementary school teacher, in his days as a student he and classmates were invited to run with a torchbearer and hold up flags displaying the five Olympic rings.

“I did it because the teacher told us to,” Sekigawa told the AP in an interview. “The impression at the time was that the flame came from Athens, Greece, and it would be absolutely outrageous if we were to let it die out. I took this so seriously.”

He said he received a red-and-white Mizuno outfit to wear, made smaller to fit children.

“I'd forgotten all about it, but my mother had kept it and so I found it years later. It was useful to show my students something that represented those times. They couldn't believe I was part of it.”

He also said the athletes he recalled most from ‘64 were women — the gold-medal women’s volleyball team, known as the “Witches of the Orient,” and hurdler Ikuko Yoda.

“We didn't think about it then, but no female students were ask to take part in the torch run,” he said.

TAKUMI SHIBATA — A retired asset manager, he was 11 years old and in the sixth grade and all the students at school were hoping for tickets to the Olympics. His teacher came in one day and said he had tickets. And students asked to what.

“And the teacher said he had tickets for soccer, and we said: ‘What's that?’"

He said the teacher explained that this is a game where “people cannot use their hands to play.”

“We said it's not interesting,” Shibata recalled.

Shibata said he and his classmates turned down the tickets. And it was not until Japan won a bronze medal in soccer in the 1968 Olympics that the game became popular.

He also recalled a slightly earlier time when not everyone had a television.

“TV was something neighbors shared,” he explained. “So at 6 p.m. children from the neighboring houses would come to my house. I didn’t even have a right to choose my channel.”

This story has been corrected to fix the spelling of the emperor's name to Naruhito, not Naurhito.