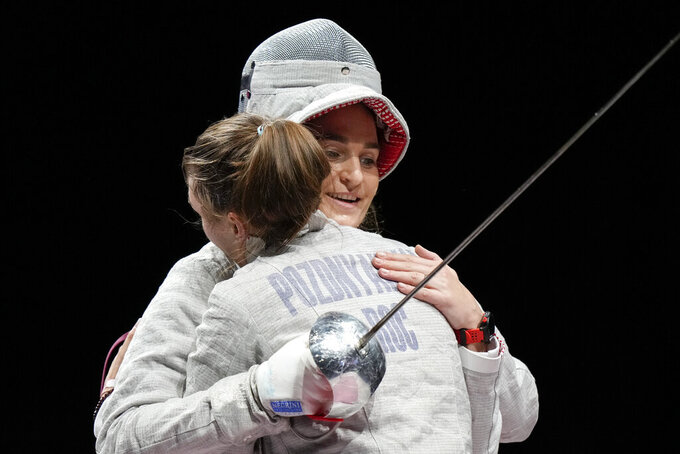 The Russian Olympic Committee is the name for Russia at the Tokyo Olympics and the committee itself has been prominent.

Pozdniakova's father, Stanislav Pozdnyakov, is a four-time gold medalist in fencing and the president of the ROC. Her opponent in the final, fellow Russian Sofya Velikaya, is an ROC officeholder too. She chairs the athletes' commission.

The final was tied 10-10 before Pozdniakova pulled ahead, marking key points with ever-louder roars of triumph. She sank on one knee after securing the win before embracing Velikaya. The two held hands and bowed to the audience of team members and other athletes.

“When I first came into fencing, people didn't call me by my name, but as the daughter of Pozdnyakov,” she said. “Obviously I'm proud to be his daughter, but we're different. Each person is an individual personality."

Pozdniakova added that she made a name for herself by winning the world title in 2018 and "at that moment I think I showed I was my own person as an athlete. Now I've confirmed that. It's really great.”

Velikaya had to accept a third consecutive silver in the individual sabre after being runner-up in 2012 and 2016. She lost to another Russian teammate, Yana Egorian, in 2016 but also has a team gold from those Olympics in Rio de Janeiro.

Stanislav Pozdnyakov was one of the greatest Olympic sabre fencers in history with four gold medals, one individual and three in the team event, from 1992 through 2000.

He's been at the forefront of Russia's push to salvage its reputation after it was handed a series of Olympic doping sanctions. Pozdnyakov was the delegation leader for the Olympic Athletes from Russia, the replacement name used for the 2018 Winter Olympics, and took over the Russian Olympic Committee presidency soon after. He's insistent this is a new, clean generation of athletes.

In the men's foil competition, Cheung beat defending champion Daniele Garozzo of Italy 15-11 in the final.

Cheung secured the win with a video review for the last point and then ran to celebrate with his coach. Garozzo earlier needed medical treatment after straining a thigh muscle when Cheung led 6-5.

Hong Kong had only ever won three medals before — the last a cycling bronze in 2012 — and a single gold. That was for Lee Lai Shan in women's windsurfing in 1996.

“The reaction in Hong Kong was insane," Cheung said. “It means a lot to show to the world we can do it. We are not only a city. We can fight for a victory.”

The U.S. entered the foil bracket with three of the top-10 ranked fencers in the world, but none made the quarterfinals. Gerek Meinhardt and Alexander Massialas both lost their opening bouts. Nick Itkin beat Russian fencer Anton Borodachev but then lost to his twin brother Kirill Borodachev in the next round.