Germany back at no-NHL Olympics aiming for another long run 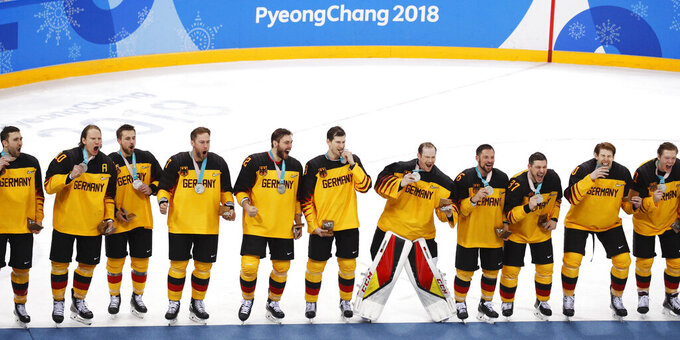 FILE- Germany players celebrate after receiving their silver medals at the 2018 Winter Olympics, Sunday, Feb. 25, 2018, in Gangneung, South Korea. Four years after an improbable run to the Olympic final and that ended with a silver medal, Germany is back at the 2022 Beijing Olympics without NHL players looking to duplicate that effort. (AP Photo/Jae C. Hong, File)

BEIJING (AP) — Dominik Kahun does not want to think too much about the 2018 Olympics, even though it marked the pinnacle of German hockey.

The pinnacle so far.

Four years after an improbable run to the Olympic final that ended with a silver medal, Germany is back at another Winter Games without NHL players looking to duplicate that effort. Usually the underdogs but now buoyed by the experience in Pyeongchang, the Germans expect to rely on the same recipe of familiarity and structure in this tournament.

“We never want to talk about that we won silver last Olympics, that we’re going to win it again. We just go step by step,” Kahun said. “Everyone knows who plays against Germany that we are hard workers, we never give up and we’re going to do that again.”

Beijing was supposed to be the Olympic debut of Edmonton Oilers star and 2020 NHL MVP Leon Draisaitl, who at 26 already is the best hockey player in German history. It also would have featured Seattle Kraken goaltender Philipp Grubauer, one of the country's best at that position.

But Germany would have been overmatched against star-studded U.S., Canada, Russia, Sweden and others. Current Los Angeles Kings assistant Marco Sturm, who coached Germany in 2018, believes the lack of NHL talent opens the door again for a surprise run, a belief shared on the other side of the world by some of his old players who are back for more.

“We did it once — why shouldn’t we get it twice?” veteran goaltender Danny aus den Birken said. “We still have this year a great team again, maybe even stronger. We are a good group for all the years. We have new talented guys, young guys coming up, so I think we’re again a good group and we’re ready for something.”

Germany was 56 seconds away from gold in Pyeongchang, leading the heavily favored Russians until Nikita Gusev’s short-handed tying goal in the final minute of regulation. Kirill Kaprizov, now an All-Star with the NHL’s Minnesota Wild, scored in overtime to hand the Germans a brutal defeat.

Of course, even being that close to gold was momentous for Germany, which had not medaled in men’s hockey at the Olympics since unification and never had won better than bronze, doing so in 1976 and 1932. More recent history had not been kind to Germany, as the older players on the roster know very well.

“We all experienced the time when we have been No. 14 in the world, and we went to tournaments just to participate,” defenseman Moritz Muller said. “We teach the younger guys that we don’t want to go back to that era. We did build something in our minds, and we start to believe in ourselves — something that we haven’t done in a long time. I think that’s the candle we’ve got to keep burning.”

Muller is one of 10 returning players from the 2018 team, which put a rare spotlight on hockey back home. Draisaitl’s emergence helps that effort, and the run in Pyeongchang turned into something of a building block for the program.

“This gave us a lot of confidence, I think, (and) respect from other countries,” aus den Birken said. “We kind of built from that, even for hockey in Germany, for kids, fans. It was a good step.”

In the eyes of Kahun and others, it was a first step and far enough in the rearview mirror not to dwell on too much this time around. But, like it or not, Germany is the most recent silver medalist in a tournament that looks just as wide open, and that comes with a certain amount of pressure.

That challenge includes preliminary games against Canada on Thursday and the U.S. next Sunday. Unlike 2018, this tournament is taking place on NHL-sized ice that is 15 feet narrower than international rinks, but Germany has more than 20 players back from the world championships and the same playing style to stay competitive when facing more talented opponents.

Whether Germany can pull off enough upsets to win another medal depends on the mix of returning players, young talent and new additions from the NHL. Forward Tom Kuhnhackl and Tobias Rieder were playing in North America as recently as last season and want to be part of another impressive chapter in their country’s sports history with another deep Olympic run.

“The last years we’ve taken a huge step forward and we’re improving and the young players and the development has been great, so it would be huge for German hockey,” Kuhnhackl said. “We got to go out there and play our strengths, play as a unit, and if we do that, we can be successful again.”