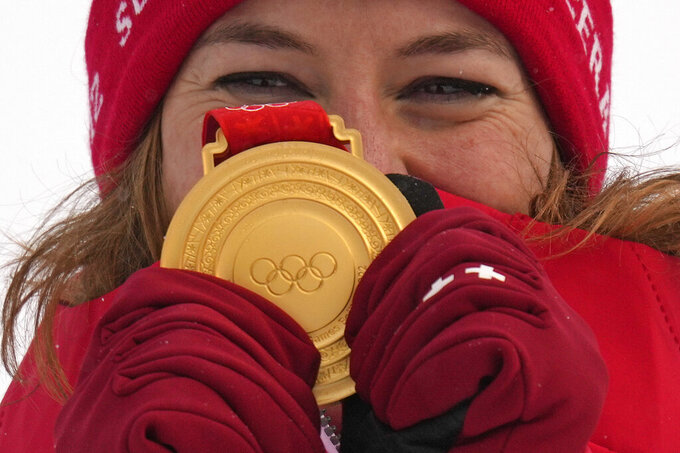 Michelle Gisin of Switzerland celebrates winning the gold medal during the medal ceremony for the women's combined at the 2022 Winter Olympics, Thursday, Feb. 17, 2022, in the Yanqing district of Beijing. (AP Photo/Luca Bruno)

BEIJING (AP) — Michelle Gisin followed the advice of her teammates to the letter. She drank wine, she skied fast.

Gisin won her second straight Olympic title in the combined race on Thursday, six days after taking bronze in the super-G.

The victory gave Switzerland its fifth Alpine gold medal of the Beijing Games. No country has ever won so many Alpine events at one Winter Games.

“I had a glass of wine before the super-G with Loic (Meillard) and Luca (Aerni) and they wrote on my door after super-G, ‘drink wine, ski fast,’ so I drank a glass of wine with them again yesterday, of course,” the 28-year-old Gisin said. “And look at that, it seems to work for me very well.”

Gisin was 12th after the downhill portion of the race but she really turned it on in the afternoon. Skiing through falling snow, she finished the slalom run 0.87 seconds faster than anyone else.

“One of the slalom runs of my life,” Gisin said.

Swiss teammate Wendy Holdener ended up with silver, finishing more than a second behind, for her second medal of the Beijing Games. Federica Brignone of Italy was third, also winning her second medal in China.

The record for most medals in Alpine skiing at a single Olympics is 14 set by Austria at the 2006 Turin Games.

Winning big-time medals isn’t really a surprise for Gisin. Although she has only won one World Cup race in her career, she also won gold in the combined at the 2018 Pyeongchang Olympics and silver and bronze in the discipline at the 2017 and 2021 world championships, respectively.

Her medal haul in China wasn’t exactly predictable, though, especially after being ill with mononucleosis in July.

“It was the craziest rollercoaster ever. It’s so beautiful and there are so many people I have to say thank you to,” Gisin said. “Because it’s all thanks to them that they brought me here, without any training and with the illness and everything, to be here today and to win is all thanks to them.”

Holdener said the cheery atmosphere within has been transferred to winning on the slopes.

“We were happy with the snow. We like the slopes. I think we are a really competitive team, and that’s pushed us,” said Holdener, who earlier won bronze in the slalom. “If the atmosphere is so good it also helps that you want to be there as well.

“The atmosphere is really cool. The team is an easy atmosphere and you want to perform as well as the others, and that motivates.”

Brignone won her earlier medal — silver — in the giant slalom, finishing just ahead of Gisin. She said Thursday’s medal was “unexpected but expected.”

“In combined in the last five years, I’ve been one of the best,” the Italian said. “In the big events, I never did it so it’s my first combined medal and I’m pretty happy and proud.”

Mikaela Shiffrin has been a big-race skier for her entire career, but she failed to finish her third race of the Olympics in the combined. The two-time Olympic champion was fifth-fastest in the downhill portion but went out without making it to the bottom in the slalom leg.

Shiffrin, who has won Olympic gold in slalom and giant slalom and silver in combined in the past, still has a chance to win another gold medal in the team event.

Switzerland, the defending champion in the event, will also have a chance for gold — a record-extending sixth of the Beijing Games.