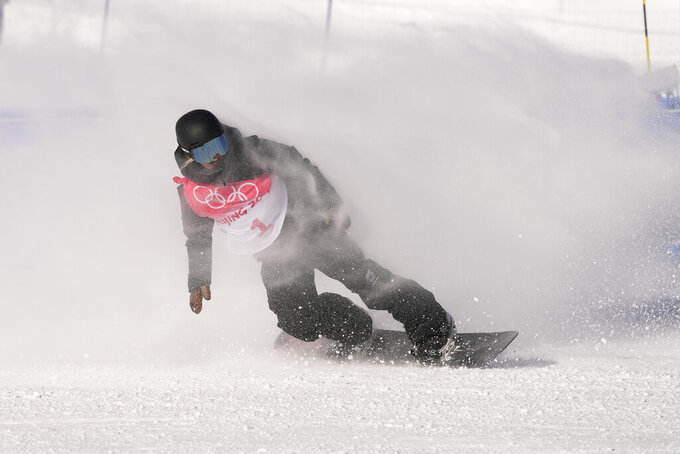 ZHANGJIAKOU, China (AP) — Not even "The Great Wall” could stave off a piercing, bone-chilling wind.

The snow replica of China’s iconic monument lined the top of the Olympic slopestyle course to cut down on the blustery conditions. All it really did Saturday was provide an eye-catching backdrop.

In gusty conditions that led to arctic-feeling wind chills, two-time defending Olympic champion Jamie Anderson and the rest of the women's snowboarders glided through the rails and jumps — albeit a little chilled — during the qualifying round in the mountains above Beijing.

Some riders wore hand and feet warmers to protect against the elements. Others donned facemasks or neck sleeves to keep the whipping wind at bay.

Nothing fully worked. Not even the protection of “The Great Wall.”

“I like the Great Wall. I do think it's helping a little bit, for sure,” said Anderson, who finished fifth in qualifying to make Sunday's 12-woman final.

Then, she jokingly added: "They need a bigger wall.”

The temperature hovered around 5 degrees F (minus-15 degrees C) and felt like minus-12 F (minus-24 C) during the competition. The wind was listed at 13 mph (21 kph), but the more telling sight may have been a wind sleeve next to the final jump: It was blowing straight out, then sideways, then straight out again.

“It's cold,” Anderson said. “It’s hard to, like, keep your core temperature warm and then doing tricks feels a little bit more intimidating.”

Zoi Sadowski Synnott of New Zealand navigated the extreme conditions to turn in qualifying's top score of 86.75. Synnott might just be the biggest challenger to Anderson. She beat Anderson last month at the Winter X Games.

Then again, the wind could play a big role, too. It did four years ago at the Pyeongchang Olympics, when Anderson won her second straight title. It was held in windy, subpar conditions while across the mountain the Alpine race was called off.

Of the elements Saturday, Synnott said: "The wind is a bit tricky. You can feel it sometimes when you’re on the course, but not enough to throw you off your game. You just have to really adapt.”

That's what Hailey Langland did after wiping out on her first run. With hand warmers stuffed in her gloves and feet warmers in her boots, Langland blocked the wind out of her mind and just went for it.

“It's gnarly because the wind gusts, they’re no longer coming straight downhill. They’re now starting to swirl in between the jumps and in the rails and starting to come uphill,” said Langland, who finished ninth in qualifying. “That can really deter your gauge of what speed you should be taking into these features, which can cause, obviously, some really bad consequences.”

Another challenge were some of the jumps with approaches that were angled into the kickers instead of straight-on. They’re unlike most jumps riders spring off in other contests, but this style was featured four years ago in South Korea.

“I’m starting to get used to it more," said Julia Marino, who was sixth to advance.

Not so much the snow under their snowboards, though. The machine-made snow had a different feel, especially on a fall. Anderson said she had a bruise to show for the snow that felt — as Marino described — like concrete.

“I’m impressed that they did it,” Anderson said of the manmade snow. “But, damn, it’s like not that enjoyable to ride on.”

To keep warm before her run, Langland also bundled up in a giant parka. As for those warmers she just started to use, she had a description for them: “Life-changing,” she joked.

Tess Coady of Australia wore a dark facemask under her helmet, along with dark lenses in her goggles.

“Intimidation,” cracked Coady, who finished eighth. “It’s so cold. My nose is like dying.”

For Enni Rukajarvi, this felt almost balmy compared to what it's like back home in Finland.

“Somehow it feels warmer here than in Finland,” Rukajarvi said after taking third in qualifying. “When it's minus-20 in Finland, it’s way colder.”

Marino didn't even feel the cold on her final run, she said, simply because she was so focused after a mistake on her first attempt.

“I just wanted to make it to the end of the course,” said Marino, who hung out in the athletes' lounge at the top to stay warm before her run. “I did not look at the flags at all. I was just like, ‘I’m going to go for my run no matter what. I don’t care about the wind. I’m going throw down what I came here to throw down.’”

Adrenaline fueled that second run. Then, a blast of reality hit in the finish area.