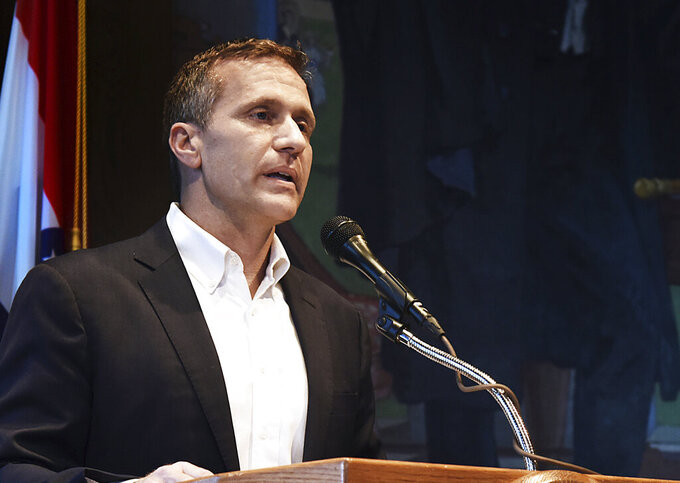 FILE - In this May 29, 2018, file photo, Missouri Gov. Eric Greitens announces his resignation during a news conference in Jefferson City. Greitens has re-emerged in public in recent months, leading to speculation that he might be open to running for office again. The Republican resigned as governor in June 2018 after facing charges connected to an extramarital affair and campaign finance issues. The charges were dropped when Greitens resigned. (Julie Smith/The Jefferson City News-Tribune via AP, File)

O'FALLON, Mo. (AP) — Former Missouri Gov. Eric Greitens has re-emerged after nearly two years out of the public eye, fueling speculation that his resignation after a tawdry scandal didn't kill his political aspirations.

He won’t run for governor this year, at least not as a Republican. The filing deadline was Tuesday. But Greitens could still run as an independent, which would require 10,000 petition signatures by July 27. Local media have suggested he could be a candidate for the U.S. Senate in 2022 if incumbent Republican Roy Blunt retires.

Greitens, who turns 46 next week, hasn’t said if he’ll seek political office again, but he hasn’t said he won’t. In February, he told St. Louis radio host Jamie Allman: “Anything is possible.”

Greitens did not respond to a Facebook message seeking comment, and his phone number and email are not publicly listed. Phone messages left with his attorney and a public relations specialist who recently worked with him were not returned.

He certainly has the look of a politician once again.

Twice this week, Greitens made public appearances dropping off protective masks to ease the shortage caused by the coronavirus — on Monday at a fire house in St. Louis and on Tuesday with police in Kansas City. He has done some recent interviews, been increasingly active on social media, and offered political commentary on Fox News on March 10, the day of the Missouri presidential primary.

St. Louis University political scientist Ken Warren said Greitens is clearly “testing the waters.” But Warren doubts if the former governor can ever win support from the Republican establishment or big-money donors.

“I don’t think he can make a comeback,” Warren said. “Not that some people haven’t overcome these things, but he was portrayed as a real dark character.”

Greitens was a rising GOP star after his 2016 election, a charismatic former Navy SEAL officer and Rhodes Scholar, founder of a non-profit benefiting veterans. He didn’t hide his ambitions, reserving the website EricGreitensForPresident.com.

Those ambitions seemingly came crashing down over the course of a few months, after Greitens was indicted on an invasion-of-privacy charge in February 2018 in St. Louis, accused of taking a compromising photo of a woman without her consent during a 2015 extramarital affair.

In short order, a Missouri House committee began investigating campaign finance issues, and Greitens faced a second felony charge in St. Louis, accused of providing his political fundraiser with the donor list of his veterans charity.

The criminal charges were dropped when Greitens resigned in June 2018. The former lieutenant governor who took over, Republican Mike Parson, pledged “to bring honor, integrity (and) transparency to the governor’s office.”

Greitens’ rebirth was seemingly fueled in February, when the Missouri Ethics Commission issued a ruling on a campaign ethics investigation. The commission found “probable cause” that Greitens’ campaign broke the law by not reporting that it cooperated with a political action committee in 2016, and required payment of a $38,000 fine. But it also “found no evidence of any wrongdoing on the part of Eric Greitens, individually.”

Meanwhile, Parson has run into some trouble of his own, drawing criticism for his refusal to issue a statewide stay-at-home order during the coronavirus pandemic. Missouri cases have now topped 1,800 with 19 deaths, and the rate of new infections is among the nation’s highest.

Some of Greitens’ critics have also re-emerged, including those who questioned the wisdom of his appearances at the St. Louis fire house and with Kansas City police given his recent visit to the Fox News set in New York, the city with the nation’s worst outbreak of the virus.

“I am offended that he put our first responders in danger for a damned photo op,” Jane Dueker, who was chief of staff for former Democratic Gov. Bob Holden, wrote on Twitter.