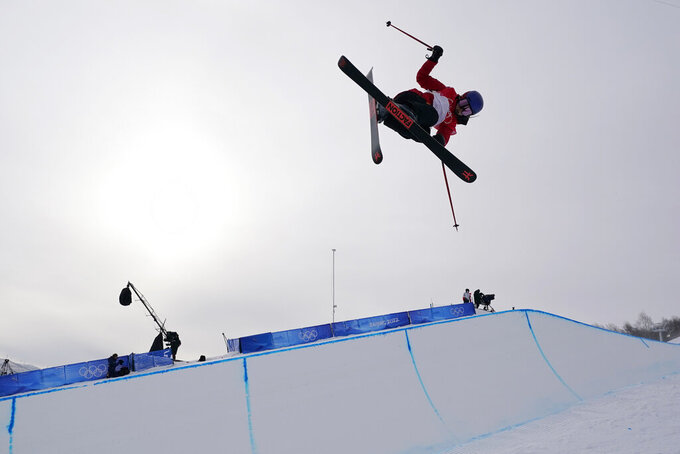 ZHANGJIAKOU, China (AP) — Eileen Gu's best trick may not have even been in the halfpipe. It was convincing herself she wasn't exhausted.

“I was journaling last night and I wrote some affirmations," Gu said. “I was like, ‘I am fresh. I am not tired. I am excited.'”

Gu turned the page on tired Thursday and recorded the top score not once, but twice in a competitive women's ski halfpipe qualifier as she chases her third medal at the Beijing Olympics.

Later, in men's qualifying, 2014 silver medalist Gus Kenworthy squeezed into the final. He put down a run that placed him in the top 12, then had to wait for almost an hour to see if his score would hold up. It did. He finished 12th to earn the last spot in Saturday's final.

Gu finished first in the women's event even though she was holding back.

The standout American-born freestyle skier who represents China already has a gold from big air and a silver from slopestyle. She's bidding to become the first action-sports athlete to capture three medals at the same Winter Games.

Gu played it safe — by her standards, anyway — in the first of two runs and still scored a 93.75. Hardly content, she went even bigger on her final run and scored a 95.50 on what was a cool and crisp morning at the Genting Snow Park.

To think, even more big air and bigger tricks await.

“I'm not going all out,” Gu said after her second run. “I have a few more tricks I'd like to have the opportunity to do.”

It was a competitive event with 10 of the freestyle skiers who moved on scoring 82.25 or higher. None, though, jumped into the 90s like Gu did — twice.

Rachael Karker of Canada was in second position with a score of 89.50 and Kelly Sildaru of Estonia, the bronze-medal winner in slopestyle, wound up third with 87.50. Safely in, Sildaru skipped her final run.

The top 12 advanced to the final on Friday.

“I’m super-happy to make the finals and to put a good run down,” Karker said. “I’ve definitely got a lot of adrenaline going.”

Defending champion Cassie Sharpe of Canada was in sixth position. She’s returning to strong form after tearing a ligament in her knee and fracturing her femur a little over a year ago. Three Americans made the final with Brita Sigourney — a 2018 Olympic bronze medalist — leading the way in eighth position. Hanna Faulhaber and Carly Margulies are right behind her.

“I actually ended up breaking a boot right before my first run, and then on my first run I broke a binding,” the 17-year-old Faulhaber said. "So we’re hanging in there, but just glad to be here and glad to be able to put down two pretty good runs.”

Gu used the second run as an opportunity to iron out some new tricks. She landed everything — another confidence-building trip through the halfpipe for the heavily favored freestyler.

“It’s really fun for me because it’s all about flow,” she said.

The halfpipe may just be her best event, too. Gu has won each World Cup halfpipe contest this season along with the Dew Tour. In addition, Gu captured halfpipe gold at the 2020 Winter Youth Olympics in Switzerland.

The grind of competitions and training sessions — sometimes a little bit of each on the same day — has started to wear on the 18-year-old.

“It’s definitely not easy. But I ran a half-marathon every week over the summer to prepare,” Gu explained. "I feel proud of the work I’ve done to build up my endurance base, so this is what I’ve been preparing for.

“The joke is I’m actually exhausted. I’m not fresh. But I was writing in my journal to try to convince myself that I was — and it’s working. I slept well last night.”