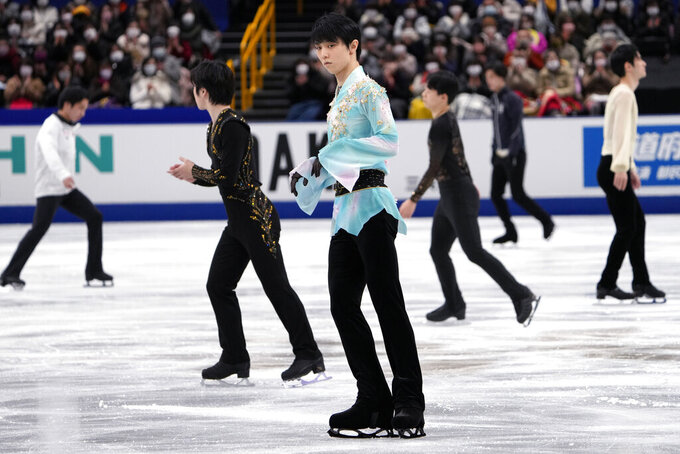 Yuzuru Hanyu, center, of Japan warms up with other competitors prior to the men's free skating competition of the Japan Figure Skating Championships at Saitama Super Arena, in Saitama, north of Tokyo, Sunday, Dec. 26, 2021. (AP Photo/Eugene Hoshiko)

Hanyu tried the jump, which unlike other quads includes an additional half rotation, at the beginning of his free skate at Saitama Super Arena in Japan. He ultimately two-footed the landing and the jump was downgraded to a triple axel, but it still set the stage for a program that included three more quads and left him with 322.36 points.

"I’m honestly relieved,” Hanyu told Kyodo News. “I felt as though I was about to cry even before the six-minute warmup.”

Uno packed five quads into his free skate but barely hung onto his quad flip and quad toe and fell on another quad toe, leaving him with 295.82 points and the silver medal. Kagiyami finished with 292.41 points.

The trio of Japanese skaters are expected to be the toughest competition for American star Nathan Chen at the Winter Olympics in Beijing, which is set to begin in just under six weeks. Chen competes at U.S. nationals in two weeks.

“It is good to be able to watch skating. Even if I wasn't competing I would still want to watch,” Chen said last week, when asked about Hanyu's return from an eight-month absence from competition due largely to an ankle injury.

“It will be exciting to see how everyone is doing,” said Chen, who has beat Hanyu head-to-head four times since the 2018 Pyeongchang Olympics. “Will that really impact how I plan? Probably not. But it is still useful, I think, to sort of have an understanding where everybody is at. But more than anything, skating is fun to watch.”

In another potential Olympic preview this weekend, Russian star Kamila Valieva drove home her status as the overwhelming favorite in Beijing with a record-setting performance at her national championship.

The winner of Skate Canada and the Rostelecom Cup scored 193.10 points in her free skate, eclipsing her record 185.29 set earlier this year, and finished with an astounding 283.48 points. That put her far ahead of Alexandra Trusova, who finished with 248.65, and Anna Shcherbakova, who claimed the bronze medal with 239.56 points.

Valieva had set the record for a Grand Prix event with her score of 272.71 points at the Rostelecom Cup.

Trusova and Shcherbakova could be Valieva's closest competition at the Beijing Games. And if that's the case, the trio could allow the Russian skaters to become the first to sweep the Olympic podium for a single nation.

In other results over the weekend, Kaori Sakamoto won the Japanese championship with a score of 234.06 points, making her one of few skaters in the world to post a score high enough to challenge the Russians.

Tarasova and Morozov, who finished fourth at the Pyeongchang Games, had a season-best 228.49 points during the Grand Prix season.