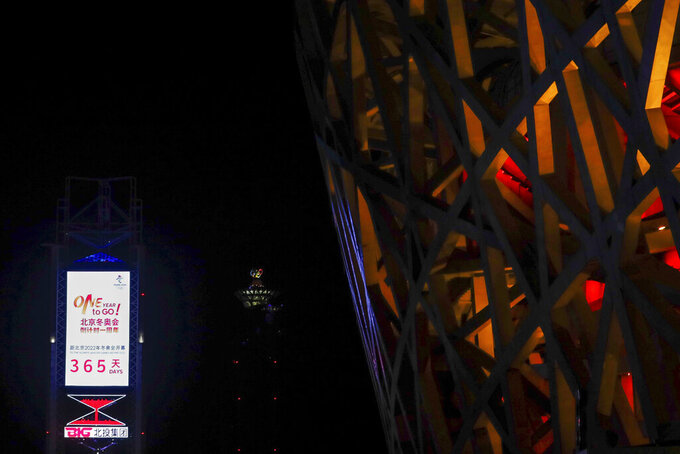 A countdown clock showing one year to go for the 2022 Beijing Olympics stands near the Olympics Tower, far center, and National Stadium, also known as the Bird's Nest, which will again be a venue for the Olympics, in Beijing on Wednesday, Feb. 3, 2021. The 2022 Beijing Winter Olympics will open a year from now. Most of the venues have been completed as the Chinese capital becomes the first city to hold both the Winter and Summer Olympics. Beijing held the 2008 Summer Olympics. But these Olympics are presenting some major problems. They are already scarred by accusations of rights abuses including "genocide"against more than 1 million Uighurs and other Muslim ethnic groups in western China. (AP Photo/Andy Wong)

Building elaborate venues for Beijing's 2022 Winter Olympics is the easy part for China, just as it was for the city's Summer Olympics in 2008. The competition venues are ready, and non-competition sites will be completed this summer with the Games set to open one year from Thursday on Feb. 4, 2022.

But these Olympics are already scarred by accusations of rights abuses including genocide against more than 1 million Uighurs and other predominantly Muslim ethnic groups in the western Xinjiang region. And unlike 2008, a new generation of Olympic athletes is speaking out on social issues and discrimination and challenging IOC rules against using the Olympics as a stage.

Hanging over all of this is the COVID-19 pandemic that has already delays and still threatens the Tokyo Summer Olympics in six months.

China says its ability to control the virus through lockdowns, quarantines, contact tracing and mask wearing should alleviate any concerns. The Winter Olympics are also much smaller than the Summer Games with about 3,000 athletes instead of 11,000.

“We are full of confidence to hold an excellent and outstanding Winter Olympics,” Chinese Foreign Ministry spokesperson Wang Wenbin said this week.

While a full-blown boycott seems unlikely, athletes and the IOC’s 14 leading sponsors are a possible target. Household names such as Coca-Cola, Airbnb, Procter & Gamble, Samsung, Panasonic, Visa, Toyota and others together pay the IOC a total of $1 billion over a four-year Olympic cycle.

British Foreign Secretary Dominic Raab has said a boycott by his country is a possibility, and new U.S. Secretary of State Antony Blinken has said he believes genocide was being committed in China.

Chinese President Xi Jinping "will not be deterred by threats of a boycott,” Steve Tsang, director of the SOAS China Institute at the University of London, said in an email. “Instead, Xi’s government will make threats to ruin the economic future of any sportsperson who may be involved in a boycott and try to deter anyone from doing so.”

The World Uyghur Congress has labeled them the “Genocide Games” and asked the IOC to move the Olympics from China. A coalition of 180 rights groups sent an open letter on the eve of the one-year-to-go date calling for a diplomatic boycott. The coalition is composed of groups representing Tibetans, Uighurs, Inner Mongolians, Hong Kong residents and others.

Asked about the letter, Wang said that "attempts to interfere with and disrupt the normal preparation and holding of the Olympic Games out of political motives are highly irresponsible. Such a move will not be supported by the international community and will never succeed.”

The IOC says its business is running sports events, although the body is highly political and has observer status at the United Nations. It has said in repeated statements that awarding the Olympics "does not mean that the IOC agrees with the political structure, social circumstances or human rights standards in the country."

Beijing is the first city to hold both the Winter and Summer Olympics. The IOC awarded it the Winter Olympics in 2015 when several Europe bidders, including Oslo and Stockholm, backed out for political or financial reasons. Eventually the IOC chose Beijing in a 44-40 vote over Almaty, Kazakhstan.

“It really is a safe choice,” Bach said at the time. “We know China will deliver on its promises.”

Athletes face tough choices, both from a political and health perspective. Most Olympians and Paralympians typically get only one chance at the big event, and many compete in niche sports that offer little financial future.

Athletes' voices are sure to be louder than ever in Tokyo — if those games can open on July 23 in the midst of a pandemic — and even in Beijing, where free speech, right of assembly and other civil liberties are severely curbed.

The IOC's present Rule 50 states that “no kind of demonstration or political, religious or racial propaganda is permitted in any Olympic sites, venues or other areas.”

The rule is being challenged globally and the United States Olympic and Paralympic Committee has said it will not punish its athletes for raising fists or kneeling on the Olympic medal podium.

The IOC's Athletes Commission is expected to make changes to the rule but is unlikely to satisfy Olympic athletes that want to use their pulpit to speak out about discrimination and human rights issues. The Black Lives Matters movement in the United States has argued that human rights are not a political issue.

“When we come to China, we would hope that the IOC would see the importance of raising awareness of the social and racial injustice and the genocide happening in China and to say it's not acceptable,” Rob Koehler, general secretary of the advocacy group Global Athlete, said.

“The IOC should welcome that. We can’t oppress athletes. We need to support them. We need to promote them and if they have a voice they have to be allowed to use it.”