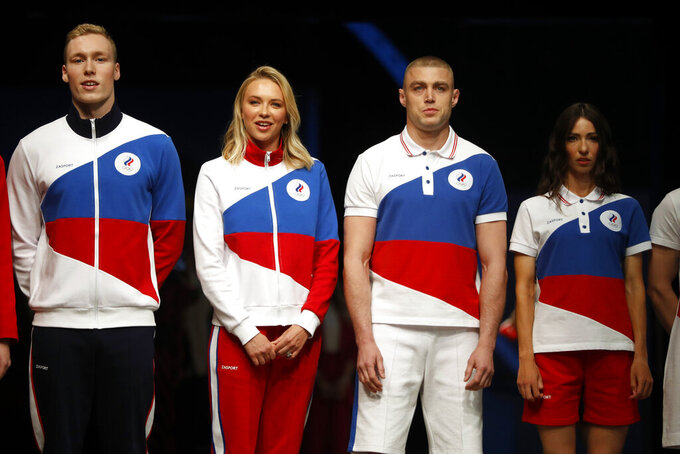 Athletes display the Olympic uniforms for Russian athletes in Moscow, Russia, Wednesday, April 14, 2021. Russia presents its Olympic kit for the Tokyo Games, which shouldn't depict any symbols of the country. Russian athletes will compete at the Tokyo Olympics as neutral after the Court of Arbitration for Sport last December banned Russia from using its name, flag and anthem at any world championships for the next two years because of state-backed doping. (AP Photo/Pavel Golovkin)

LAUSANNE, Switzerland (AP) — Russian gold medalists at the Tokyo Olympics are set to hear music by Tchaikovsky as the replacement for their national anthem, which has been banned as punishment for state-backed doping.

The International Olympic Committee said Thursday it approved Piano Concerto No. 1 by Russian composer Pyotr Tchaikovsky for use at the Tokyo Games this year and the 2022 Winter Olympics in Beijing.

It was proposed by Russian Olympic officials after their first choice, the patriotic folk song “Katyusha,” was blocked by the Court of Arbitration for Sport. It was previously used at skating world championships this year.

A CAS ruling last year banned Russia’s flag, anthem and team name from the next two Olympics in the latest punishment for an extensive doping program and cover-ups, including at previous Olympic Games and testing laboratories in Moscow and Sochi.

The team will be known by the acronym “ROC,” for Russian Olympic Committee, in Tokyo and Beijing.

It will use the flag of the country’s Olympic committee rather than the national tricolor, though official team uniforms unveiled last week are in the white, blue and red colors associated with the national flag.