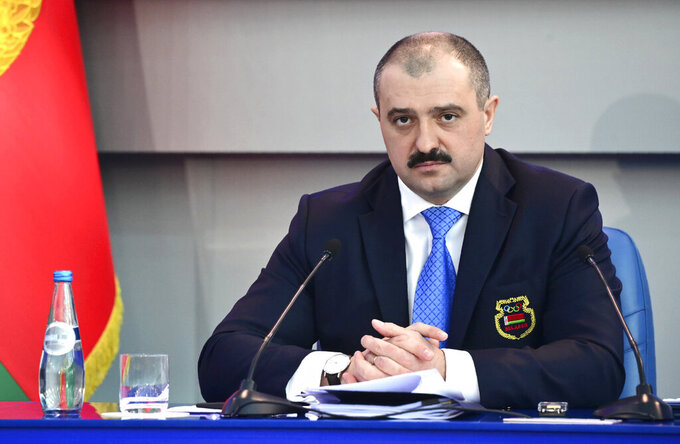 Viktor Lukashenko, an oldest son of the Belarusian President Alexander Lukashenko, attends the Belarusian Olympic Committee session in Minsk, Belarus, Friday, Feb. 26, 2021. Viktor Lukashenko, who advises his father on national security, was previously the national Olympic body's vice president under his father, whose disputed victory in state elections last August led to ongoing protests in the former Soviet republic. The Belarusian Olympic Committee elected the son of President Alexander Lukashenko as leader on Friday, despite both men being suspended by the IOC and barred from the Tokyo Games. (Andrei Stasevich/BelTA Pool Photo via AP)

Viktor Lukashenko was voted in last month to take over from his father as president of the Belarusian Olympic committee despite both being suspended by the IOC in December.

The International Olympic Committee first intervened in fallout from widespread protests and a violent state crackdown since Alexander Lukashenko was re-elected president last August in a disputed poll widely seen as rigged.

Belarus Olympic leadership, including father and son as president and vice president, had “not appropriately protected the Belarusian athletes from political discrimination within the NOC, their member federations or the sports movement,” the IOC said in December.

The election meeting two weeks ago “failed to fully address” those concerns, the IOC said on Monday.

Both Lukashenkos are suspended from attending the Tokyo Olympics which open in July. Viktor Lukashenko, who advises his father on national security, is also banned from travel in the European Union.

A third Belarusian sports official, Dmitry Baskov, is also suspended by the IOC after being linked to the death of a political activist.

The IOC said it also refused to recognize the election of Baskov, head of the national ice hockey federation, to the Belarusian Olympic body’s board.

The current standoff means Belarus risks its athletes having to compete as an independent team under the Olympic flag in Tokyo.