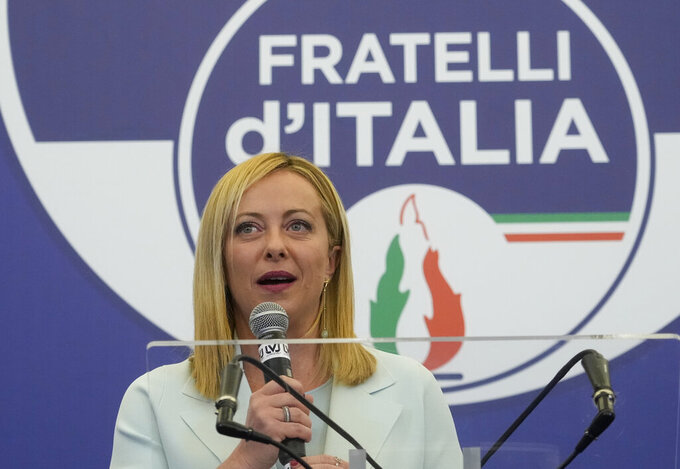 Far-Right party Brothers of Italy's leader Giorgia Meloni speaks to the media at her party's electoral headquarters in Rome, early Monday, Sept. 26, 2022. Italians voted in a national election that might yield the nation's first government led by the far right since the end of World War II. (AP Photo/Gregorio Borgia)

ROME (AP) — Making his second visit to Rome in two weeks, IOC president Thomas Bach met with Giorgia Meloni, whose far-right party won the most votes in Italy's election, as concerns rise over delays in organizing the 2026 Winter Olympics in Milan and Cortina d’Ampezzo.

“We are committed to a very close and trusted cooperation, to make (the 2026 Games) a resounding success for Italy, and for the entire Olympic movement,” Bach said in a statement provided by the International Olympic Committee.

The IOC said Meloni “offered her full support for successful Olympic Games” during an hour-long meeting Thursday during which the 2026 Games were top of the agenda.

The election was for a five-year legislative term but Italian governments rarely last that long.

“These games are very important for us. Italy is more than able to stage magnificent games and we want to impress the world again. You can count on us,” Meloni was quoted as saying in the IOC statement.

Costly construction delays, a leadership vacancy linked to a volatile political climate and a lack of sponsors amid a spreading financial crisis have been areas of concern for the 2026 Games.

Local authorities have been waiting for the new government to take over before appointing a new CEO of the organizing committee after the departure of Vincenzo Novari — a move which has paralyzed construction and other plans.

“(The lack of a CEO) is becoming a pressing and urgent issue,” said Italian Olympic Committee president Giovanni Malagò, who also leads the 2026 organizing committee and accompanied Bach to the meeting with Meloni.