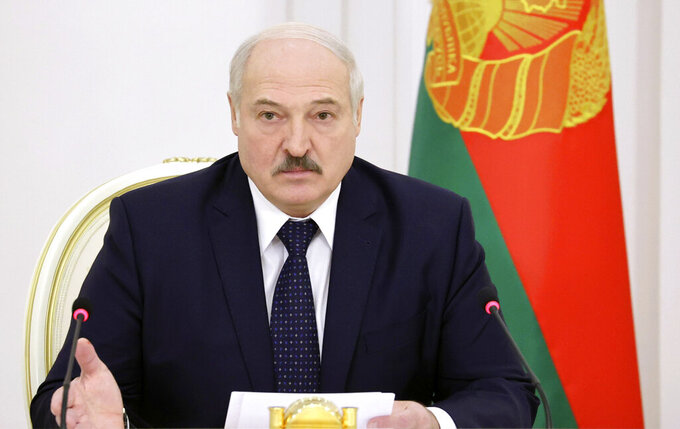 Belarusian President Alexander Lukashenko attends a meeting on the work of the economy in the current year in Minsk, Belarus, Monday, Dec. 7, 2020. (Maxim Guchek/BelTA Pool Photo via AP)

GENEVA (AP) — The IOC suspended the authoritarian president of Belarus, Alexander Lukashenko, from all Olympic activities on Monday including the Tokyo Games next year.

Lukashenko, who has led the Belarus Olympic Committee for 23 years, claimed a sixth presidential term after a state election in August widely viewed as rigged in his favor.

Belarus has since been in turmoil amid protests and a crackdown by security forces, and the International Olympic Committee has investigated complaints from athletes that they faced reprisals and intimidation.

IOC president Thomas Bach said after a board meeting on Monday that the Belarus Olympic body's leadership “has not appropriately protected Belarus athletes from political discrimination” within national sports organizations.

“This is contrary to the fundamental principles of the Olympic Charter and therefore seriously affects the reputation of the Olympic movement,” Bach said during a news conference held online.

Suspending Lukashenko does not currently affect Belarus athletes, nor their right to compete in Tokyo as a recognized national team with their own flag, anthem and colors.

Belarus does risk being dropped as co-host of the 2021 world championship in men's ice hockey by the IOC suspending all talks with the former Soviet republic about staging events and asking all its stakeholders to respect Monday's decision.

Bach said the International Ice Hockey Federation would discuss the Belarus hosting role in the days ahead.

Co-host Latvia has publicly distanced itself from working with Belarus since the disputed election.

The IIHF has also “initiated a procedure” against the Belarus official who sits on its ruling committee, Bach said.

Viktor Lukashenko, the president's son and first vice president of the Belarus Olympic committee, and who runs its daily operations, is also provisionally suspended, the IOC said.

The IOC will continue to help fund Belarus athletes preparing for upcoming Olympic Games by paying scholarship money directly to them. Payments to the Belarus OIympic Committee are stopped.

Athletes helped alert the IOC to alleged abuses, and the Belarus Sport Solidarity Foundation led a march in October in Lausanne, Switzerland, to the Olympic offices.

Alexander Lukashenko was previously unable to attend the 2012 Olympics in London because of a European Union visa ban after a previous crackdown that followed a disputed election.