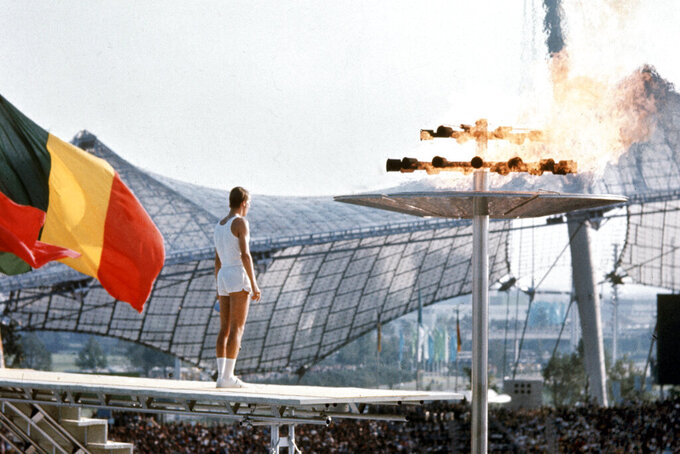 FILE - In this Aug. 26, 1972, file photo, West German middle distance runner, junior athlete Guenther Zahn (18), stands near the Olympic flame he lit above the Olympic Stadium during the opening ceremony of the Summer Olympic Games in Munich, Germany. (AP Photo/File) 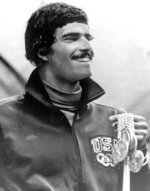 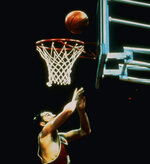 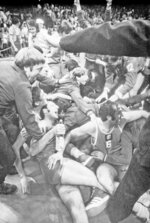 TEL AVIV, Israel (AP) — The 1972 Munich Olympics were marked by historic achievements and unprecedented controversy but will be forever defined by devastating catastrophe.

In hosting the 1972 Munich Games, West Germany was eager to erase the stain of the 1936 Games in Berlin that came to symbolize a paragon of Nazi propaganda. Munich introduced the first-ever Olympic mascot, the dachshund “Waldi,” and its official motto, “the cheerful Games,” looked to project that feel-good spirit.

It started out that way, with American swimmer Mark Spitz winning the gold medal and setting world records in all his seven events. It continued with a coming out party for Soviet gymnast Olga Korbut, who soared to three gold medals and helped revolutionize the sport with her acrobatic performances. And it concluded with the men’s basketball final, in which the United States suffered its first-ever international loss in a game marred by multiple questionable calls in the final seconds to hand the Soviet Union a 51-50 victory.

However, it was all overshadowed by one of the greatest tragedies to ever befell a sporting event – the massacre of the Israeli Olympic team.

In the early hours of Sept. 5, eight Palestinians from the “Black September” group raided the Olympic village. They infiltrated the Israeli living quarters and killed an Israeli weightlifter and wrestling coach before taking nine others hostage. The Palestinian attackers demanded the release of prisoners held by Israel and two left-wing extremists in West German jails. To prove their resolve, the attackers castrated one of the Israelis before he was shot dead and tossed the body of the other out on the street.

A lengthy negotiation with West German authorities ensued, with much of the drama unfolding on live television. At one point, two of the hostages were allowed to have a brief conversation with German authorities through a second-floor window to prove they were alive. But when one tried to answer a question he was clubbed in the head by the butt of a rifle. An Associated Press image of one of the masked kidnappers on an Olympic village balcony quickly became iconic.

Eventually, the kidnappers were transferred to an airfield, along with their hostages, under the guise of meeting their demands. But amid a botched German rescue attempt, the Palestinian kidnappers opened fire on their hostages and hurled a grenade inside one of the helicopters in which the Israelis were bound.

Altogether, 11 Israelis were killed in the brazen operation that shocked the world, gave the Palestinian cause a worldwide audience and ushered in a new era of global terrorism. In response, Israeli Prime Minister Golda Meir set up a special unit from Israel’s top-secret Mossad agency to hunt down and eliminate all those involved in the massacre.

The games were put on hold for 34 hours. But despite heavy criticism they resumed upon the decision of International Olympics Committee chief Avery Brundage, who already faced charges of anti-Semitism for his instrumental role in the 1936 Olympics and close ties to Nazi officials.

Only 44 years later, did the IOC finally commemorate the victims before the 2016 Rio Games.

As a Jewish athlete, there was concern that he would also be targeted. He was placed under guard and escorted out the country for his own safety after the massacre.

The teenage Soviet gymnast exploded on the scene, becoming a star after winning gold in the team competition. The “Sparrow from Minsk” also won gold in the Balance Beam and floor exercise, narrowly missing out in the all-around because of a dramatic fall.

Her performance at the 1972 Games is widely credited with redefining gymnastics as an acrobatic, rather than dance-centric, sport and ushered in a new era of popularity. The originator of the “Korbut flip” later became the inaugural inductee to the International Gymnastics Hall of Fame.

The game remains one of the most controversial events in Olympics history. The team of U.S. college stars entered the game protecting a 63-0 overall record for Americans in men's basketball, winning gold in every Olympics. At the height of the Cold War, the U.S. was once again a heavy favorite over the Soviet Union.

After a close-fought game, the Americans clung to a 50-49 lead with three seconds left. The Soviets immediately inbounded the ball but confusion over whether a time-out had been called sparked an official to halt play with a second left, triggering the first do-over.

The Soviets inbounded the ball again, failing to score and setting off an American celebration and fans streaming into the court. But the officials hadn’t properly re-set the clock and inexplicably ordered another take. With a third chance at hand, the Soviets heaved a desperation pass the length of the floor that was converted into a layup to edge ahead at the buzzer.

An irate U.S. team boycotted the medal ceremony and filed an official protest. A panel swiftly rejected it along political lines. The U.S. team still refuses to claim their silver medals.