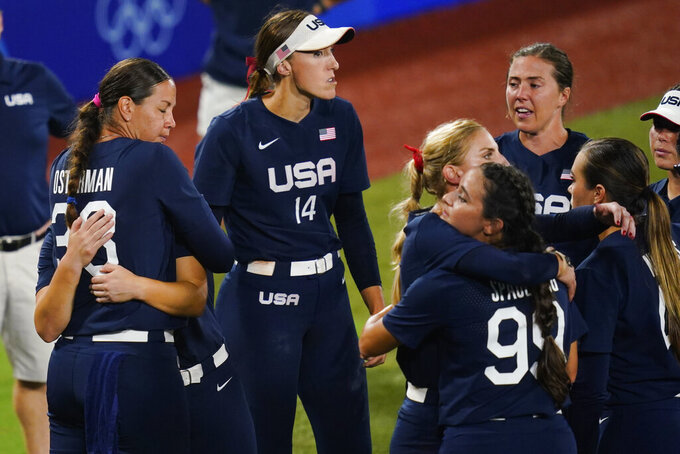 YOKOHAMA, Japan (AP) — They marched single file onto the podium near shortstop with the blank expressions of the condemned.

When silver medals were handed out, they dangled them around each other’s necks like weights.

Eyes were red and damp. Perfunctory waves for the cameras were managed. Hands fidgeted with bouquets of sunflowers.

“It stings,” Cat Osterman would say more than two hours later. “I’ve never been on a team that had so much fight.”

For Osterman and Monica Abbott, it was just like 4,723 days earlier.

Only worse. This likely was their final moment on their sport’s grandest stage, which the International Olympic Committee has snatched away until at least 2028.

“I challenge the IOC to instate softball as a women's sport into the Olympic docket on a regular basis,” said Abbott, who pitched a night before her 36th birthday. “It's been proven that we attract viewers, we're active on social media. It's a worldwide sport. It's played really well in multiple continents and areas of the world, and I think it's really difficult when you're in an Olympics and then out of an Olympics, you're in one and you're out of one, to continue to build that momentum and engagement for this sport to grow worldwide.”

Ueno took a one-hitter into the sixth inning, five days after her 39th birthday, and Japan snuffed out an American rally attempt with an acrobatic sixth-inning double play that will long be replayed.

Goto dealt Haylie McCleney, the top American hitter at .529, her first strikeout of the Olympics with a 69 mph pitch at the hands, then allowed a single to Janie Reed.

Amanda Chidester lined a rocket to third that seemed likely to drive in a run and leave two on. The ball smacked the left wrist of third baseman Yu Yamamoto and ricocheted to perfectly positioned shortstop Mana Atsumi. She stuck out her glove for a backhand spear, then made a Derek Jeter-like jump throw to second baseman Yuka Ichiguchi to double up Moultrie.

There have been other 5-6-4 double plays — St. Louis' Nolan Arenado started one five nights earlier. But off the wrist?

“It hits you in the gut,” Osterman said. “If that goes through, we probably tie the game, maybe even go up with just the amount of momentum we would have on that alone.”

On a night of a half-dozen web gems, Reed made a leaping catch at the left-field wall to rob Yamato Fujita of a two-run homer in the seventh.

With Goto overthrowing and her pitches flattening, Japan coach Reika Utsugi had Ueno (2-0) re-enter for the seventh, and she retired Valerie Arioto on a flyout, Ali Aguilar on a groundout and Delaney Spaulding on a foulout to the catcher, setting off a celebration on the field surrounded by 34,046 mostly empty seats in Yokohama Stadium.

“In your home country, you want to put the pitching legend back on the mound to finish the game for you,” U.S. coach Ken Eriksen said. “And I thought it was a class act.”

Atsumi, the No. 9 batter, had a run-scoring infield hit in the fourth inning and Fujita lined an RBI single off Abbott in the fifth.

Ueno improved to 9-1 in her Olympic career, allowing two hits, striking out five and walking two.

“The coolest thing about her is is that she constantly reinvents herself and attacks hitters in different ways,” Osterman said. “It just proves that the peak age for softball players is not 22. So I think in some ways, I kind of think she's a softball god. Things always go her way."

Ueno had pitched a five-hitter to win the 2008 gold medal game.

“I try not to waste energy and I want to be efficient and I want to control the hitters,” Ueno said through a translator. “Having strikeouts is not the only solution.”

Reed tripled off the glove of Eri Yamada and the center-field wall with one out in the first. That was the closest the U.S. came to scoring.

Abbott and the 38-year-old Osterman were the last holdovers from the U.S. team that lost to Japan 3-1 in 2008, when Osterman gave up the first two runs and Abbott the last. The U.S. remained stuck at three softball golds after victories of 1996, 2000 and 2004.

Ueno allowed two hits, struck out five and walked two in six innings while combining with Goto on a three-hitter.

Osterman, who came out of retirement with the goal of adding a gold medal to the one she earned in 2004, allowed two hits in two scoreless innings. With six straight right-handed hitters due up in the third, Eriksen replaced the left-hander with 28-year-old right-hander Ally Carda (0-1).

Fujita lined a single off the diving attempt of Aguilar at second leading off the fourth inning, was sacrificed to second and took third on a comebacker.

Ichiguchi walked, and Eriksen went to the mound with Atsumi coming up. Carda stayed in, and and Atsumi hit a slow two-hopper to second and slid in ahead of Aguilar’s throw as Fujita scored the first earned run against the Americans in this Olympics.

“The only thing that I would maybe second-guess,” Eriksen said, “would be the fact that I could have brought Monica in a batter early on the ground ball that was hit, but then again, it was a topped ground ball. ... It wasn't like it was smokin' Ally.”

Yamamoto singled with two outs in the fifth, and Abbott came in and threw a wild pitch, then allowed Fujita to line a single into right for a 2-0 lead.

American batters sputtered as they did throughout the Olympics, totaling just nine runs while hitting .216 with four extra-base hits and a .590 OPS. That lack of offense was the reason they watched 15 smiling and bowing Japanese players clutch their gleaming gold medals, gazing at the prizes and holding them up in pride. Japan’s flag was raised on the center pole and “Kimigayo,” the Japanese national anthem, was played.

“It was bad luck,” Eriksen said. “Tonight just was not our night.”

They thought back to the year delay caused by the pandemic, of not having a team staff from January to June in 2020.

“I’m proud of the tournament that we put on,” Abbott said, “and the involvement, engagement and the drama and the excitement that USA softball was able to show to the world on the Olympic stage.”