Japan's champion: Matsuyama wins the Masters for his nation 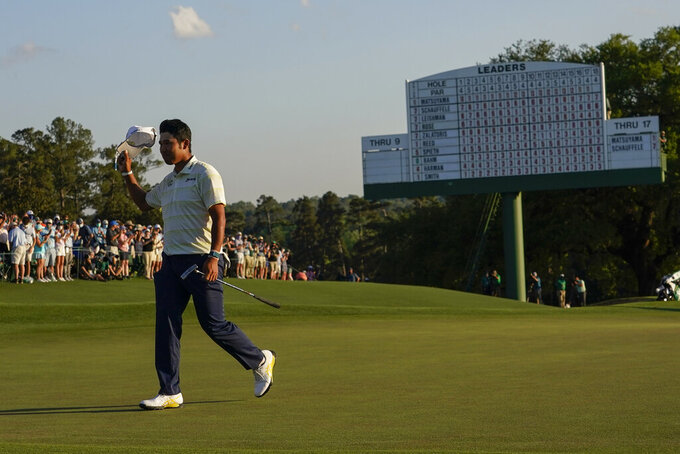 AUGUSTA, Ga. (AP) — Hideki Matsuyama almost turned down his first chance to play the Masters. It was a month after a devastating earthquake and tsunami in Japan, disasters that killed thousands and destroyed much of the region he called home in March 2011.

He decided to play a month later, only because he thought it would lift spirits.

A decade later, he lifted his country again — becoming Japan’s first man to win a golf major. Matsuyama’s one-shot victory over Will Zalatoris at Augusta National made him the Masters champion, easily the biggest moment for the sport in his golf-crazed homeland.

He was the greatest this week at the Masters, bar none.

History will say he won the tournament on Sunday with a final-round 73, but really, he won it on Saturday with a blistering finish that put him atop the leaderboard for good. He went 6-under on a seven-hole stretch of the back nine in the third round, the decisive spurt that nobody could match. Even the final margin on Sunday was perhaps a bit misleading; it only tightened up when Matsuyama made three bogeys in his final four holes, though the lead never seemed threatened.

Matsuyama finished at 10-under, 278. Zalatoris was at 9 under, Jordan Spieth and Xander Schauffele were tied for third at 7 under, and Jon Rahm and Marc Leishman tied for fifth at 6 under. Justin Rose, who jumped out in front Thursday with a 65, finished seventh, five shots back.

“It’s thrilling to think that there are a lot of youngsters in Japan watching today,” Matsuyama said. “Hopefully in five, 10 years, when they get a little older, hopefully some of them will be competing on the world stage. But I still have a lot of years left, so they are going to have to compete against me still.”

Message to those kids: Good luck. Matsuyama is only 29.

He moved from No. 25 to No. 14 in the world rankings, and will be welcomed back to Augusta National for Masters week for the rest of his life — one of the many perks that come once someone claims a green jacket.

“I think it’s really good for the game of golf globally,” Spieth said. “He’s a great young player who inevitably was going to win major championships, in my opinion.”

It turned out to be a Masters finish like none other, capping a week that was memorable for who was there, who wasn’t there for long and who couldn’t be there at all.

Lee Elder — the first Black player in the Masters when he broke the tournament’s color barrier in 1975 — joined Jack Nicklaus and Gary Player for the ceremonial tournament-opening tee shots on Thursday morning. By the time nightfall arrived Friday, defending champion Dustin Johnson was done after missing the cut by two strokes. And five-time Masters winner Tiger Woods wasn’t at Augusta National to play or even take part in the Champions dinner, his recovery from a car crash in Los Angeles ongoing at his Florida home.

Woods wasn’t seen. Not long after Matsuyama won, he was heard, or at least read.

“Making Japan proud Hideki,” Woods wrote on Twitter. “Congratulations on such a huge accomplishment for you and your country. This historical (at)TheMasters win will impact the entire golf world.”

Japan is already set to play host to the Olympics this summer, delayed a year because of the coronavirus and still a thorny subject for many in that country who wonder if the Tokyo Games should be held at all.

The golf event at those Olympics is scheduled for the Kasumigaseki Country Club, the place where Matsuyama won as an amateur to secure that first trip to Augusta National in 2011 — where he visited Butler Cabin to receive the prize as the low amateur that week. A decade later, he returned to Butler Cabin, this time for Johnson to slip the green jacket over his shoulders.

“I’m really looking forward to the Olympic Games in Tokyo,” Matsuyama said. “If I am on the team, and maybe it looks like I will be, I’ll do my best to represent my country, and hopefully I’ll play well.”

He takes nothing for granted. There’s no way the Masters champion won’t be a pick for the Japanese Olympic team, but since it’s not official yet, he wouldn’t act as if it was.

And he might have seemed cool and collected Sunday, when in fact he was anything but. He didn’t sleep well or as late as he wanted, felt pangs of nerves on the first tee and pushed his first swing of Sunday into the pine straw off the right side of the fairway. He made bogey, Zalatoris started birdie-birdie, and an overnight four-shot lead was down to one.

Matsuyama calmed down right away. The lead was never lost. Eventually, the Masters had been won. And when it was over, Shota Hayafuji — who got his first win as Matsuyama’s caddie — brought the pin back to the 18th hole, then removed his cap and bowed to the course.

And Matsuyama will get the level of respect that befits champions there forever now as well.

“Up until now, we haven’t had a major champion in Japan, and maybe a lot of golfers or younger golfers, too, thought, well, maybe that’s an impossibility,” Matsuyama said. “But with me doing it, hopefully that will set an example for them that it is possible and that, if they set their mind to it, they can do it, too.”