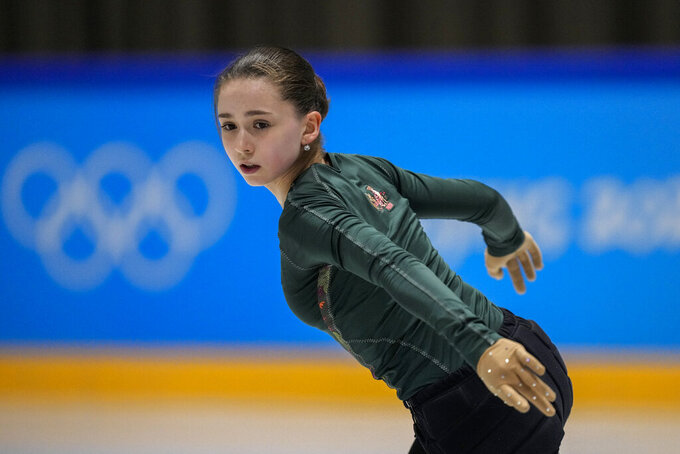 BEIJING (AP) — One of the lawyers that will judge Russian figure skater Kamila Valieva’s doping case at the Beijing Olympics on Sunday is an American who was once picked by Maria Sharapova’s legal team for her appeal over a similar performance-enhancing drug.

Jeffrey Benz was named Saturday by the Court of Arbitration for Sport to sit on the three-judge panel for the urgent case of Valieva, a 15-year-old Russian who tested positive for a banned heart medication at an event in December.

The verdict from Benz and his fellow judges, who are from Italy and Slovenia, is expected Monday and will decide if the sport’s new star can compete a day later at the start of the women’s individual event. She would be favored to win gold on Thursday.

The panel for the closed-door, video-link hearing was picked by the court, known as CAS, from a select group of nine judges made available for special duty at the Beijing Olympics.

Neither side in the Valieva case was allowed to pick a preferred judge — as they would in a typical case outside the Olympics — but the Russians might be happy with the American.

Benz was an elite figure skater, competing in ice dance at the national level in the United States, and has been picked for several cases involving Russian sports as one of the most in-demand judges at CAS.

In Sharapova’s appeal at the Switzerland-based court in 2016, Benz was chosen on behalf of the Russian tennis star to serve on the three-judge panel. She had been banned for two years after testing positive for the banned heart medication meldonium at the Australian Open. CAS ruled she was not entirely at fault and her ban was cut to 15 months.

Another skating case at CAS in 2017 saw Benz picked by the Russian national federation and RUSADA, the anti-doping agency which is a party in the Valieva hearing on Sunday.

That time, Benz and his fellow judges extended the ban for Russian short track speedskater Alexandra Malkova. She served a 20-month ban instead of three months.

The Valieva case is also not the first involving Russian athletes and Benz as a judge for Olympic eligibility.

A group of 67 track and field athletes took a fast-track case to CAS in July 2016 amid fallout from the Russian doping scandal and frenetic legal activity ahead of the Rio de Janeiro Olympics. The judges upheld the rules of track’s governing body, which excluded the Russians.

On Sunday, the CAS judges will examine an appeal — filed by the IOC, World Anti-Doping Agency and International Skating Union — to have Valieva excluded from the women’s competition. They argue RUSADA’s ruling on Wednesday to lift an interim ban on Valieva was wrong.

The unusual case has caused havoc at the Olympics. The skater’s positive test came from a sample taken six weeks earlier and was flagged by a laboratory in Sweden only on Monday — after she skated and helped the Russian team win gold in the team event. The United States took silver.

Benz once worked as a lawyer for the United States Olympic Committee, but the case he will hear Sunday has no impact on the team event, where the Americans would stand to be elevated to gold if the Russians are disqualified. RUSADA will separately investigate the original doping case against Valieva because it happened at the Russian national championships.

In an effort to dispel any notion that Benz may be conflicted as a judge in the case, CAS noted Saturday that “any party which has objective reasons to challenge the composition of the panel may file a petition against any member of this panel.”

No challenge had been filed late Saturday against Benz or his fellow judges, panel chair Fabio Iudica and Vesna Bergant Rakočeviċ.