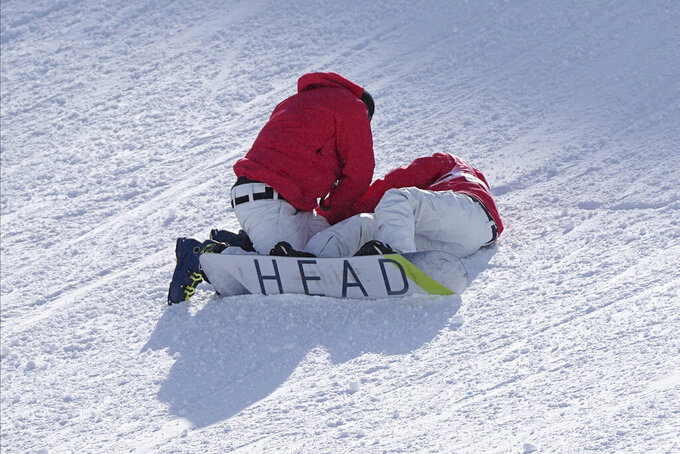 A medical personnel checks on Japan's Rina Yoshika after she fell on the slopestyle course ahead of the 2022 Winter Olympics, Thursday, Feb. 3, 2022, in Zhangjiakou, China. (AP Photo/Gregory Bull)

BEIJING (AP) — The Latest on the Beijing Olympics:

Japanese snowboarder Rina Yoshika injured her back in a training crash and will not be able to compete in the Olympic slopestyle contest.

Yoshika, ranked 12th in the world, fell hard on a jump during Thursday’s practice session. Medical staff rushed to help her, and took about 20 minutes to stabilize her and put her in a sled to take her down the hill.

Japanese Olympic officials said the 22-year-old suffered a spinal injury but was not paralyzed. They said she will return home after receiving treatment for her injuries.

Ukrainian figure skater Ivan Shmuratko has tested positive for the coronavirus, meaning his country will score no points in the men’s component of figure skating's team event.

Shmuratko says he is “devastated” by the positive test ahead of the men’s short program in the team event Friday.

Ukraine doesn’t have any other men’s skaters at the Olympics so it can’t replace Shmuratko in that part of the team competition.

The Ukrainian Olympic Committee says it hopes Shmuratko can recover in time for the start of the men’s individual competition Tuesday.

Germany is in a similar situation after a positive test for pairs skater Nolan Seegert ruled him out of the team event.

Brianna Decker has been stretchered off the ice with what appeared to be a severe leg injury in the U.S. women's hockey team's opening game at the Beijing Olympics.

Decker yelped out in pain several times while lying on the ice after being tripped from behind by Finland’s Ronja Savolainen to the left of the U.S. net in the first period. Savolainen hooked her leg around Decker’s, and the two fell awkwardly to the ice with the Finland player landing on top of Decker.

Decker yelled as she was being tended to by a team doctor, and the veteran forward was unable to put any weight on her left leg as she was loaded on to a stretcher. The 31-year-old Decker is one of the team’s three assistant captains and is making her third Olympic appearance.

As Decker was being stretchered off, U.S. coach Joel Johnson could be heard asking the official whether a penalty would be called, before being told no.

The 24-year-old Riiber is No. 2 in the World Cup rankings after a three-year run of being the top-ranked athlete in the sport that combines ski jumping and cross-country skiing. He fell just short of a medal twice at the 2018 Olympics, finishing fourth in the large and normal hill competitions.

Riiber said on Instagram “the (gold) is yours guys."

The first Nordic combined event at the Beijing Games is Wednesday.

Bach’s promised dinner with the tennis player is widely anticipated amid global concern for her safety after she accused a former Chinese Communist Party official of sexual assault.

Peng’s brief public appearances in the three months since have not assured tennis officials and human rights activists of her well-being.

The IOC and Bach have been criticized for taking part in video conferences with her that could not be independently verified.

Bach says “we will know better about her physical integrity and about her mental state when we can finally meet in person.”

No details about the dinner during the Beijing Olympics have been given.

The IOC president says if Peng wants an official Chinese investigation into her allegations “we would also support her in this.”

The 35-year-old longtime Boston Bruins center is expected to be among the best players in the tournament without NHL players. Krejci won the Stanley Cup with Boston in 2011 and has 854 points in 1,118 regular-season and playoff games.

Krejci was almost a point-a-game player last season for the Bruins. He left to go home and play in the Czech Extraliga so friends and family could watch him up close before he retired.

“We’re going to re-test him tonight and re-test him tomorrow morning, and I strongly believe that he’s going to join the practice tomorrow," Pesan said.

Strong winds could delay the start of the second downhill training session on Friday at the Beijing Olympics.

Race organizers say there is only “a little window” expected in the forecast to hold the session.

The world’s best skiers got a chance to see the Rock course up close for the first time in the opening training session. Other training sessions are scheduled Friday and Saturday before the men’s downhill opens the Alpine program on Sunday.

Friday’s training is scheduled to start at 11 a.m. but the gondola taking the athletes up to the summit may not be able to open because of strong winds.

FIS men’s race director Markus Waldner says “I have seen a little window after 12 o’clock so there is a chance that we have the training tomorrow but later on.”

Temperatures are set to be extremely cold with highs of minus-28 degrees C (minus-18 degrees F) expected.

Skateboarding, surfing and sports climbing have officially been added to the 2028 Los Angeles Olympics.

The decision by the International Olympic Committee was expected after its executive board agreed to an initial list of 28 sports in December.

Los Angles organizers have welcomed the “three iconic West Coast sports” that made their debuts at last year’s Tokyo Olympics. The IOC is promoting urban sports to attract younger viewers.

Boxing, modern pentathlon and weightlifting have not yet been included. They can be added next year by meeting targets set by the IOC board.

Space can also be made for sports suggested by Los Angeles organizers. Those could include breakdancing or baseball and softball. Breakdancing will debut at the 2024 Olympics at the request of the Paris organizers.

Germany will go forward with the team competition to open the figure skating program at the Winter Games, even though it will score no points in pairs after Nolan Seegert tested positive for COVID-19 upon his arrival in Beijing.

His partner, Minerva Fabienne Hase, skated alone during the team practice session Thursday. She had been deemed a close contact but returned two negative tests, allowing her to leave her hotel quarantine.

While many nations have multiple pairs teams in Beijing, Seegert and Hase are the only ones representing Germany. So it was left with two options: withdraw from the team competition or take no points in pairs. The rest of the team decided to compete, but taking no points in the pairs discipline knocks Germany out of the running for a medal.

Germany coach Vitali Schulz said “there is hope that the pair can compete in the individual event” if Seegert tests negative before it begins Feb. 18. Pairs is the final discipline in the Olympic program.

The Czech Olympic committee says Polášek, who is a former junior world champion, has no symptoms but is in an isolation hotel.

The team says Kožíšek recently recovered from infection and has been kept in the protocol for close contacts. That allows him to train while living apart from other athletes and officials.

Organizers have announced 55 more positives tests for COVID-19 at the Beijing Olympics.

The updated daily figure includes 26 cases among the athletes and team officials from about 68,000 tests. Thirteen of them were found on arrival in Beijing and the other 13 were from daily PCR tests.

The other 29 cases were from workers and accredited personnel.

A total of 287 COVID-19 cases have been recorded since Jan. 23. Those people were put into isolation.

The IOC said Wednesday at least 11 people have been treated at a hospital but none were serious cases.

Figure skater Nolan Seegert has tested positive for COVID-19 and is in isolation at his hotel, leaving Germany without its only pairs team when competition begins with the team event Friday.

The German Olympic Sports Confederation says Seegert tested positive upon his arrival in Beijing and wasn't experiencing any symptoms. His partner, Minerva Fabienne Hase, was deemed a close contact and also is in isolation, though she could be released from quarantine by returning two negative tests at least 24 hours apart.

The team event requires each country to put forward an entrant in each discipline: men, women, pairs and ice dance. The rules state that any athlete testing positive has to be replaced or “the team event will be skated with one less team,” but because Germany does not have any another pair in Beijing, it could be forced to withdraw.