League of their own: Softball players are part-owners 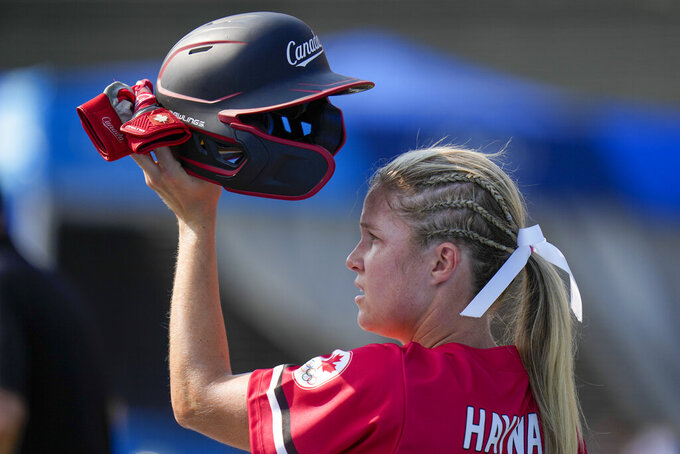 FILE - In this July 21, 2021 file photo, Canada's Victoria Hayward holds her helmet aloft during the softball game between Mexico and Canada at the 2020 Summer Olympics in Fukushima , Japan. Hayward will be back on the field this weekend as a softball player — and as an owner. After hitting .300 at the Tokyo Olympics, the Canadian outfielder heads one of four teams that start play Saturday, Aug. 28, at Athletes Unlimited outside Chicago.(AP Photo/Jae C. Hong, File)

Victoria Hayward will be back on the field this weekend as a player — and as an owner.

After hitting .300 at the Tokyo Olympics, the Canadian outfielder heads one of four teams that start play Saturday at Athletes Unlimited in Rosemont, Illinois.

Athletes Unlimited launched with softball in 2020, ran volleyball and lacrosse competitions this year and follows with its second softball season. There are three games a week over a five-week season, all in the same market.

"Players are the owners of the league," Hayward said. “We recruit the players. We help make the rules. We govern what goes on when players are in market. It’s a group of 60 softball players. Teams change every week. The top performing players are captains and coaches of their own teams. So there are no coaches. There are no owners. It is player led.”

Hayward, American pitcher Cat Osterman, Italian catcher Erika Piancastelli headline teams this weekend along with American Jessie Warren, who did not play in Japan. Members of the 60-player league earn points, and leaders win cash and prizes. The four players heading the leaderboard each week become captains for the following week and draft new teams.

Jon Patricof, president of Major League Soccer’s New York City team from 2016-18 and before that president of the owner of the Tribeca Film Festival, founded Athletes Unlimited with Jonathan Soros, a son of investor George Soros and CEO of JS Capital Management. For them, the players are more important than the teams. Social justice and civic leadership are emphasized.

There were no fans last season because of the coronavirus, but there will be spectators this season. Tickets are $15-$22, and capacity is about 2,500.

Fox's FS1 and the CBS Sports Network televise most of the games. Athletes receive profit sharing for 20 years for each season played.

Hayward said her first profit-sharing check for the 2020 season was $42.

“It’s better than any other professional opportunity we’ve had in the United States,” Hayward said. ”But just even to see in the first year we’re making money, it’s going to continue to build. So it just incentivizes you as an athlete to share, get the word out.”

Osterman, a 38-year-old left-hander, plans to retire after the season, this time for good. She won her second Olympic silver medal following a gold in 2004. She was 13-1 in the inaugural Athletes Unlimited season, striking out 96 in 64 innings.

Rosters include Janie Reed, the American left fielder who made the great leaping catch in the Olympic gold medal game and whose husband Jake is a reliever for the New York Mets; and Haylie McCleney, who hit .529 (9 for 17) in a tournament where the overall batting average was .206 in 17 games.

With softball dropped for the 2024 Olympics, less prominent competitions are all the players have until at least the 2028 Los Angeles Games.

Hayward, who lives in Orlando, Florida, was the first athlete to sign. She was introduced by Cheri Kempf, the commissioner of National Pro Fastpitch, which launched a competition in 2004 but missed 2020 and 2021 because of the coronavirus, then suspended operations Aug. 1.

“They had reached out to me and three other softball players competing in the United States to pitch their idea of a string of new sports leagues for women with a completely different model,” Hayward said. ”They had done research and they had found just that the old model of teams and traveling just wasn’t interesting the fans anymore. And fans wanted more access to their favorite athletes. And they cared more about the athletes than the teams.”