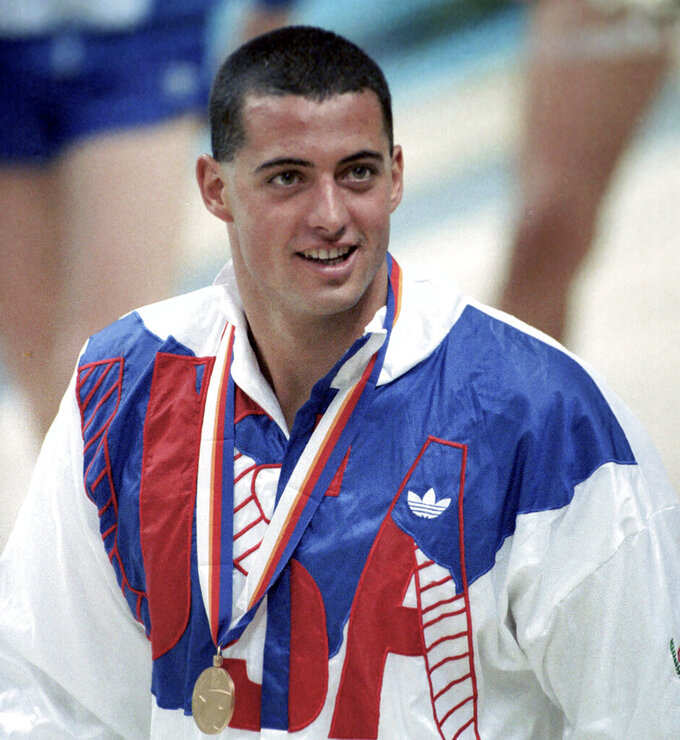 FILE - In this Sept. 21, 1988, file photo, Matt Biondi, of the United States, wears his Olympic gold medal during awarding ceremonies after the men's 800-meter freestyle relay at the Summer Olympic Games in Seoul, Korea. Bitter at the resistance he faced for trying to transform the sport of swimming, Biondi turned his back on the sport in the early 1990s. Now, he is back at the pool, leading a new organization that hopes to improve the state of swimmers who have long been mere afterthoughts to those who make all the important decisions and cash in on their efforts. (AP Photo/Eric Risberg, File)

Matt Biondi has picked up where he left off nearly three decades ago.

Bitter at the resistance he faced for trying to transform swimming into a truly professional endeavor after his triumphant performance at the Seoul Olympics, he turned his back on the sport that was such a big part of his life.

“We could have done some really great things,” Biondi told The Associated Press, still sounding a bit wistful. “Instead, it sort of ended in a train wreck.”

Now, he's back at the pool, leading a new organization that hopes to give swimmers a greater role in governing the sport and making sure they're able to properly cash in on their efforts.

After nearly two years pitching his idea at meets and clubs around the world, Biondi officially launched the International Swimmers’ Alliance on Tuesday — essentially returning to his long-abandoned effort to modernize the sport.

This time, he intends to see it through.

He's quietly signed up more than 100 swimmers from 31 nations, with a leadership group that includes Olympic champions Ranomi Kromowidjojo of the Netherlands, Katinka Hosszu of Hungary, Chad le Clos of South Africa and American Lia Neal, who recently announced her retirement from competition.

Neal heard a couple of Biondi's recruitment talks. She was impressed by his message.

“He just made a lot of sense,” Neal said. “I feel like this is the beginning of something pretty major that will have a big impact on the future of swimming.”

Biondi wants to follow the path set by other groups that are looking to give more power to Olympic-sport competitors, including Global Athlete and the Athletics Association, which is focused on track and field.

With the U.S. Olympic trials set to start on Sunday — and the Tokyo Games less than two months away — Biondi isn't looking to make a big splash right away.

He's been largely focused on getting the organization up and running, complete with all the modern-era conduits of communication.

For someone who spent his younger years trying to go as fast as possible, he's taking a much more deliberate approach this time around. The top swimmers are totally locked in on their Olympics goals, as they should be. There's no time at the moment for discussing big-picture issues.

“I don't anticipate anything earth-shattering until next year,” Biondi said. “We are taking great measures to go carefully, go methodically, so we can build a solid reputation among the swimming community that we are a helpful, useful organization.”

Time has not dimmed Biondi's remarkable swimming career, his legacy cemented by a dynamic showing at Seoul in 1988 when he made a run at Mark Spitz's then-record of seven gold medals in a single games.

Biondi finished with five golds, a silver (by one-hundredth of a second) and a bronze.

At a time when most swimmers had little hope of making ends meet after the college careers were over, Biondi tried to capitalize on his Olympic success with a professionalized approach that actually paid the bills. He landed endorsement deals. He commanded appearance fees. He put on clinics.

“We had a revenue stream,” Biondi proudly recalled. “It was new — and it was met with a great deal of resistance by several coaches and USA Swimming in particular.”

He said the governing body threatened his eligibility for the 1992 Barcelona Games. He was able to compete, but managed only one individual medal (a silver in the 50-meter freestyle) along with two delayed golds. He was extremely bitter about the whole experience and retired shortly afterward.

“USA Swimming was out to produce the best-quality athletes to win the most medals at Olympics. That's it," Biondi says now. “The governing body did not support me. In fact, they actively suppressed my ability to compete. I was so upset with swimming and the fact they they failed to modernize.”

Adding salt to the wound in Barcelona, he was demoted to the preliminaries of the 4x100 free relay after Jon Olsen edged him by two-hundreds of a second in the individual event. Biondi still got a gold, but he could only watch as Olsen anchored the winning team in the final.

“I had pulled our medley relay and free relay from oblivion so many times at top level competitions," Biondi said. “It left such a sour taste in my mouth. I felt used. I felt unheard. I was sad for our sport.”

He became a high school math teacher and coach, shunning swimming at its highest levels for 17 years.

Over time, the anger faded. Biondi slowly drifted back to a sport that had taken tepid steps toward the system he once envisioned, allowing Michael Phelps to become a millionaire many times over and many top swimmers to at least make a comfortable living.

Yet it still presents major financial challenges for most competitors, provides scant transparency to where the money goes, and gives the athletes little say in deciding major issues.

Those are some of the areas Biondi wants to address. You'd think that would he an easy sell to those putting in the work, but he often finds swimmers — especially those in the U.S. — are as resistant to change as the coaches and bureaucrats who benefit from their efforts.

“American swimmers don't have a sense for the economy of the sport. They don't see anything beyond the lane," Biondi said. “For decades, they've been the race horses. They're told what to do, and they're obedient. We need a generation of swimmers who are willing to look at the big picture of the sport.”

Amazingly, Biondi said many swimmers aren't really familiar with his myriad accomplishments, which makes the selling job even tougher. But those that do a little digging quickly find that he's someone worth listening to.

“I get my credibility through Wikipedia,” he quipped. “My list of medals and accomplishments goes three screens deep.”

He hopes to add a few more before he's done.