McMorris in search of one more win: Olympic snowboard gold 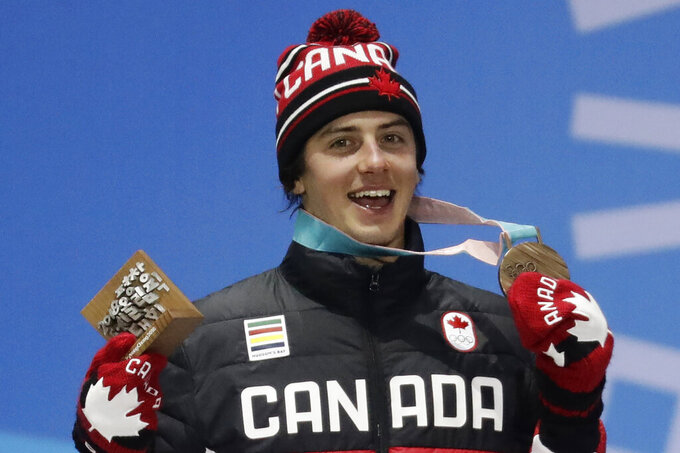 FILE - Men's slopestyle bronze medalist Mark McMorris, of Canada, smiles during the medals ceremony at the 2018 Winter Olympics in Pyeongchang, South Korea, Sunday, Feb. 11, 2018. McMorris has endured quite a pounding over more than a decade of hard riding that has made him Canada's most-decorated snowboarder. At 28 and heading into his third Olympics, he is missing one thing from an already awe-inspiring resume. (AP Photo/Morry Gash, File)

Then, to the top of his arm. “A big plate in my humerus.”

And at his face. “Plates put into my jaw but I had one of them removed.”

McMorris has endured quite a pounding over more than a decade of hard riding for Canada's most-decorated snowboarder. At 28 and heading into his third Olympics, he is missing one thing from an already awe-inspiring career.

Of the 25 medals he has won over the past 10 years at major events, not one is an Olympic gold.

McMorris will be on the mountain Saturday for the slopestyle and big air contests, where he’ll be going for his 10th and 11th gold medals at the Winter X Games. Next month, he’ll get two more chances to win his first Olympic title in those same events at the Beijing Games.

Given what he's been through, it's laughable to think a medal would make or break him. Among McMorris' most ill-timed injuries came at the Winter X Games in 2014 when he broke ribs during his final slopestyle run at the X Games. He recovered to win a bronze medal less than a month later in Sochi.

In 2016, he shattered his femur after catching a toe edge on the landing at a big air contest.

He was able to recover from that in time to start the 2016-17 season and earn his spot on the highly competitive Canadian team for the 2018 Olympics.

But there is more to snowboarding than contests, and one reason McMorris has gained such a devoted following over the years is that he loves taking to the backcountry, as well.

It was there in March 2017, with the fog rolling in, that McMorris, on an outing with his brother Craig and a group of friends, slammed into a tree and had to be helicoptered to the ICU. Footage from the bloody, gruesome accident is included in the gut-wrenching documentary “Unbroken,” which goes through McMorris' accident and recovery.

He broke his jaw, his arm and also suffered a collapsed lung and ruptured spleen. He was placed into an induced coma, and when he came out of it, he was certain his career as a high-level snowboarder was over.

“The call came from Craig and when he said, ‘You have to come, it’s serious,' then panic set in,” McMorris' mother, Cindy, said in the documentary.

After the tubes and needles started coming out, doctors told McMorris there was a chance that he could get back to where he was again. The idea he would pass on that chance never occurred to him.

“I don't know what else I would do if I had just called it quits at 23,” McMorris said. “And I'm happy with my choice to keep pushing. I think it’s a feel-good story for anyone. If an athlete gets hurt, and gets a chance to get close to 100 percent again and do what you love, then why wouldn't you try?”

Less than 12 months later, McMorris was in the starting gate. He won another bronze medal in Pyeongchang — nothing less than amazing given both the physical and mental obstacles he had to overcome.

“The trauma is going be around for my whole life,” McMorris said in the documentary. “It was a snowboard accident and I snowboard every day. How are you really supposed to forget about it?”

Since then, he has gotten better and stronger, but just as he was rebounding, he suffered another blow — this one to his heart: His close friend, Jake Burton Carpenter, died after a relapse with testicular cancer. Burton Carpenter is the inventor of the modern-day snowboard, and the man who has supported so many riders on their journeys.

McMorris was one of his closest friends, and as the 2019-20 season wound down, he conceded that Burton's death impacted his performance.

“It’s not like I’m thinking about him while I’m snowboarding down in my contest run, but it’s just, like, everything else,” McMorris said in March 2020. “It’s everyone coming up to you, saying ’Hey, sorry.' It’s just nonstop. And everything reminds you of the guy.”

Nearly two years later, some of those wounds have healed, and McMorris' riding has grown stronger.

“I'm at peace with it but I miss ... him,” McMorris said in his recent AP interview. “But it's a little bit easier to shred and think of him and like, know he's there.”

As is the case on the halfpipe, the stakes and difficulty are ever-increasing on the slopestyle and big air courses. An 1800 — a jump with five full rotations — could be what's needed to win a title in either event, and there are about a half-dozen riders who can do it.

As he has shown time and again, McMorris feels the risk is worth it.

“Winning the Olympics can really help set you up for life,” McMorris said. “Yes, it's just one side of snowboarding, and it’s a one event that comes around once every four years, but it holds a lot of weight.”