Men's downhill at Olympics postponed a day because of wind 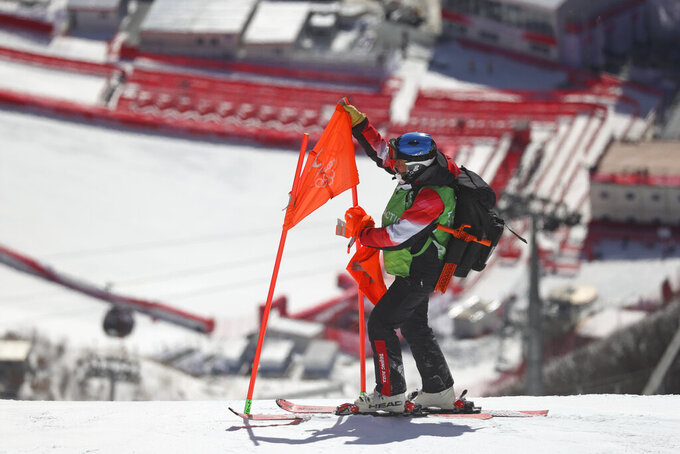 A course worker removes a flag from a gate on the men's downhill course after race was postponed due to high winds at the 2022 Winter Olympics, Sunday, Feb. 6, 2022, in the Yanqing district of Beijing. (AP Photo/Alessandro Trovati)

BEIJING (AP) — The men's downhill at the Beijing Olympics was postponed a day because of wind that gusted at up to 40 mph at the top of the course when the race was supposed to start Sunday, delaying the opening event of the Alpine schedule.

The downhill now shifts to Monday, which already was the day for the women's giant slalom, with Mikaela Shiffrin of the United States defending her Olympic gold from 2018. The downhill will be at the slope used for speed races at Yanqing Alpine Skiing Center, and the giant slalom will be about a half-mile away on the slope used for technical races.

All in all, should make for quite an action-packed Day 1 for the sport and its power couple: Shiffrin is dating Aleksander Aamodt Kilde, considered the man to beat in the downhill.

“The wind here is a big, big challenge. And it's a pity, because you have good weather, you have good snow, you have a perfect slope,” said Kilde, a Norwegian who leads the World Cup downhill and super-G standings and was fastest in Friday's second training session. “We just have to stay patient and do the best.”

Added Kilde: “I would love to ski today, but I would not love to ski in unfair conditions.”

At the top of the speed course known as The Rock, the wind was deemed too dangerous when Sunday’s men’s race originally was scheduled to begin at 11 a.m.

“It was obviously too windy to race, so that’s the call,” said Travis Ganong, an American who finished fifth in the downhill at the 2014 Sochi Games.

“I’ve been a downhiller for my whole career and this is part of the sport,” Ganong said. “We’ve gotten good at this: the waiting game.”

The start was delayed Sunday three times for a total of three hours in the hope that the wind would relent. But eventually the decision was made at 1 p.m. to put it off to another day, instead of trying to run the race at 2 p.m. By then, part of the issue was that the light would be fading, with sunset expected shortly after 5:30 p.m.

As soon as the race was called off, many of the skiers came down an adjacent training slope with their gear. Then they either went back up the mountain for some free skiing or went down to their rooms in the village.

It created a chaotic scene in the space between the two main gondolas, with athletes, coaches and servicemen going every which direction — up, down and across.

One thing missing: a sudden exodus of fans. Because of the pandemic, no spectators are attending the Alpine skiing races.

The sky was clear and sunny, but there were some sporadic bursts of wind in the finish area.

“At certain points, the wind is on your back, and at others it’s in your face,” said Johan Clarey, a 41-year-old Frenchman at his fourth Olympics. “It changes all the time and its hard to predict, hard to anticipate.”

He and the other racers spent hours waiting and now need to recalibrate.

“You’ve got to try to stay focused and try to stay mentally there, but also you have to turn it off, because if you’re always focused the whole day, then it’s really hard to keep your energy up. You use all this adrenaline and it’s gone by race time,” Ganong said. “Now I need to go get some wind in my face, and just kind of connect with the mountain again, get some snow under my feet and just kind of reset.”

Wind was also an issue for Alpine skiing four years ago at the Pyongchang Games, where multiple races were postponed and the schedule was shuffled repeatedly.

“It happens. It's the way of the game,” said Kjetil Jansrud, a 36-year-old Norwegian who leads active athletes with five Olympic Alpine medals, including a downhill silver in 2018 and bronze in 2014. “For us, this day is over. Might happen tomorrow. Might be another day.”

Saturday’s third and final downhill training session for the men was stopped because of wind after only three skiers — including Kilde — went down the hill.

None of the world’s top racers had ever seen the course until the first training run on Thursday. The usual pre-Olympic test events were scrapped because of the coronavirus pandemic.