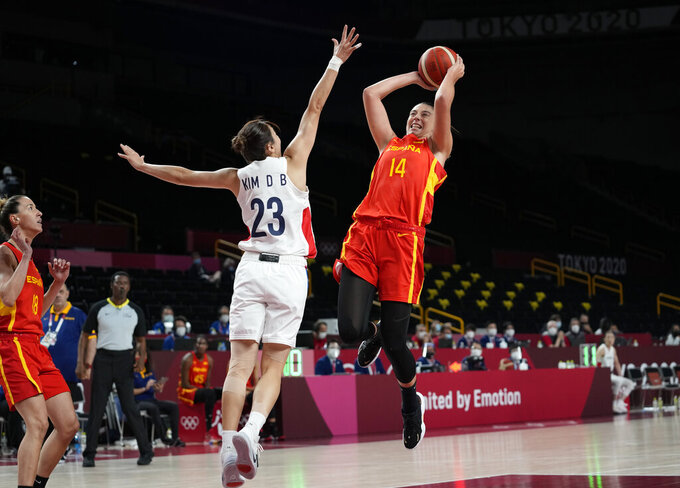 SAITAMA, Japan (AP) — Astou Ndour scored 28 points and had 10 rebounds as Spain held on to beat South Korea 73-69 Monday in the first game of the women's Olympic basketball tournament.

Laura Gil added 16 points and Cristina Ouvina had 11 for Spain. The Spaniards won silver at the 2016 Rio Games and came to Tokyo with a trio of former or current WNBA players. The 6-foot-5 Ndour, who plays with the Chicago Sky, also had four blocks and four steals.

South Korea's Ji Su Park, a member of the Las Vegas Aces, had a double-double with 17 points and 10 rebounds. Leeseul Kang finished with 26 points for South Korea and Hyejin Park added 14. The South Koreans led 34-33 at halftime and looked ready to pull the upset during a third quarter with six ties.

Spain led 54-53 after the third off Laura Gil's free throw. Spain then scored the first 12 points of the fourth to take control of the game, and Ndour poured in five straight. They led by as much as 13 before having to stave off a final run by South Korea.

These teams are back on the court Thursday with South Korea facing Canada and Spain playing Serbia.