NHL teams get 2021-22 schedules with, without Olympic break 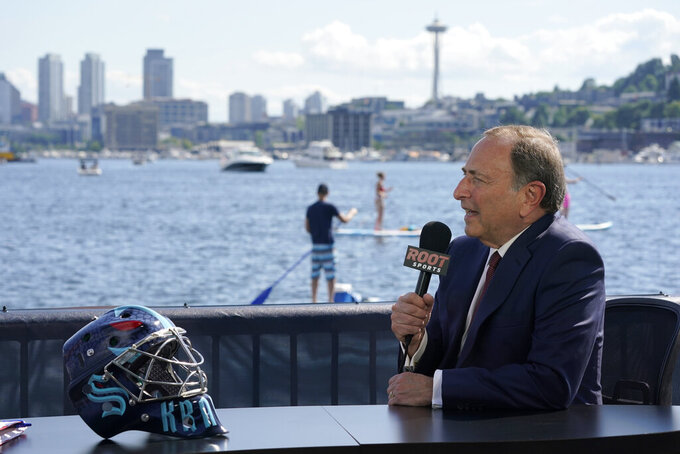 The NHL sent teams two versions of the 2021-22 schedule — one that includes an Olympic break to pause the season so players can go to Beijing and another version of what the calendar would look like if they do not.

Deputy Commissioner Bill Daly confirmed all 32 teams have seen each schedule and that as of Thursday afternoon there was not an agreement in place between the league, the NHLPA, the International Ice Hockey Federation and the International Olympic Committee for players to return to the Winter Olympics.

The schedule the NHL unveiled Thursday evening includes the Olympic break in the hope that a deal gets worked out. That would cause some frenetic stretches of play during the regular season that runs through April 29, with the playoffs in May and June and the Stanley Cup handed out before July 1.

A schedule without an Olympic break would look more like normal, with the final wrapping up in mid-June.

“The league is working on parallel paths,” said Chicago Blackhawks general manager Stan Bowman, who is also in charge of picking the 2022 U.S. Olympic roster. “I have to tip my cap to the schedule makers. They have a tough job. There’s 32 teams and they’re doing two schedules for both. Either way, however the schedules shake out, we will make it work.”

Each one includes the Winter Classic between Minnesota and St. Louis on Jan. 1 at Target Field in Minneapolis, All-Star Weekend in Las Vegas Feb. 4-5 and an outdoor game between the Predators and back-to-back champion Lightning in Nashville on Feb. 26.

Blues GM Doug Armstrong, tabbed by Hockey Canada to run the Olympic management team, said the Beijing break is longer than Sochi in 2014. Nonetheless, the challenge is more similar to Russia than 2010 when the Games were nearby in Vancouver.

“It’s a little more compressed, but it’s not as bad as we’ve seen in the past,” Armstrong said. “The wear and tear coming back from (Sochi) was certainly a lot different than Vancouver. I would imagine going to China for that, the wear and tear is going to be different. It’s not the compression of the schedule. It’s what it does to the players and it’s trying to find rest, trying to give the players the opportunity to regenerate when they get back.”

Florida GM Bill Zito said the schedules are not drastically different. Training camps open in September and the season starts with Tampa Bay’s banner-raising against Pittsburgh and Seattle's inaugural game at Vegas on Oct. 12— then goes for a full 82 games with a 16-team playoff for the Cup to follow either way.

Returning to the Olympics after skipping 2018 in South Korea would be worth it for those involved.

“Certainly, there’s a strong desire to go to Olympics, and there’s some details to be fine-tuned and worked out,” Bowman said. “If the Olympics do come to be, it’ll be a fantastic opportunity. I know the players are hopeful of that. If the details can get worked out, it would be pretty exciting.”