No matter who wins the finals, Kentucky will have champions 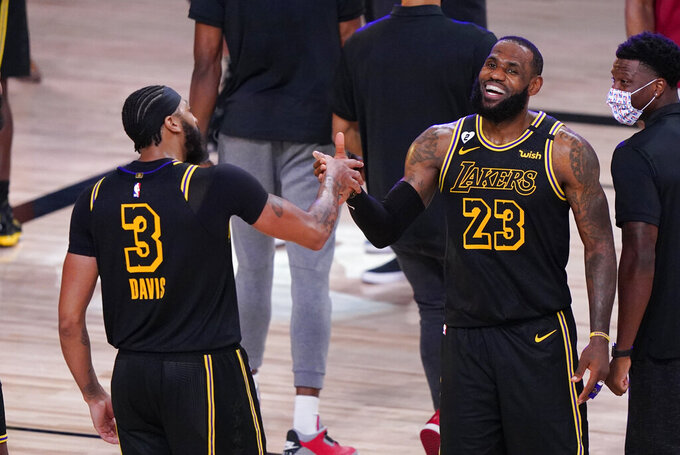 And these NBA Finals seem tinged in blue — Kentucky blue, to be precise.

No matter what happens in this title series, Kentucky’s list of NBA champions is sure to grow. Anthony Davis, Rajon Rondo and coach Frank Vogel have Kentucky ties from the Los Angeles Lakers’ side; Miami Heat players Bam Adebayo and Tyler Herro played at Kentucky, as did Heat President Pat Riley.

“When I look at all these guys and how they’re playing, I’m not surprised that guys would be able to stand up to this,” Kentucky coach John Calipari said Tuesday. “The environment here, everything about it is preparing them for the NBA. It’s an NBA environment, how we practice, the competitiveness in practice, the games. Every shot matters here. ... These kids, it’s kind of like their rookie year is here.”

Calipari coached Davis, Adebayo and Herro at Kentucky. He tried to coach Rondo, saying Tuesday that he nearly lured him onto the Dominican Republic’s national team — coached by Calipari — with hopes of qualifying for the Olympics.

Kentucky is the fifth school to have four former players in a single NBA Finals, joining La Salle in 1956, UCLA in 1980, North Carolina in 1991 and Arizona in 2017. The top two scorers in the playoffs are almost certain to be former Kentucky standouts; Denver’s Jamal Murray currently holds the top spot with 504, and Davis is third with 432 -- just five points behind Boston’s Jayson Tatum, a Duke product.

“Obviously, he coached in the league, so he knows what it takes to get there,” Davis said of Calipari. “I think that’s an advantage for all players who go to Kentucky. He’s able to get you ready in one, two years.”

It’s not lost on Heat coach Erik Spoelstra that the finals are going to be a Kentucky recruiting tool, and he also said that Riley isn’t shy about enjoying having players from his alma mater on the roster.

“We love Kentucky players because you’re there to get better, to be pushed, to understand what it means to play for a team, play a role and to train to become a pro at this level,” Spoelstra said. “You’re going to face good competition in practice. You’re going to be expected to work. It’s an environment that, as much as it possibly can, prepares you for the pros, even though it’s at the collegiate level.”

The Lakers will wear their gold uniforms for Game 1 on Wednesday night, with the Heat in black.

Game 2 — and Game 7, if necessary — will see the Lakers in their black uniforms that are an homage to Kobe Bryant, with the Heat in white those nights.

Game 1 of the finals is scheduled to tip off Wednesday at 9:10 p.m., which annually leads to grumbling from fans in the Eastern time zone since the matchup probably won’t end until shortly before midnight.

It could be worse. The sleep cycles for Heat guard Goran Dragic’s family are going to be a mess for the next couple weeks.

The NBA Finals are being aired in 215 countries — including Slovenia, where Dragic’s wife, children, parents and many close friends are. And there, Game 1 starts Thursday at 3:10 a.m.

Miami’s Tyler Herro is likely to be the first player born in the 2000s to play in an NBA Finals game; he’s usually one of the first subs that the Heat use, so some first-quarter minutes for him on Wednesday night seem probable.

The 20-year-old is not the youngest player in the series, however.

Lakers rookie Talen Horton-Tucker doesn’t turn 20 until Nov. 25. He appeared in two games during the Western Conference semifinals but has been inactive for 12 of his team’s 15 postseason contests.

There’s never been a tougher ticket for an NBA Finals game.

The NBA says 92 people — family and player guests — will be in attendance to watch the finals at AdventHealth Arena on the Walt Disney World campus. Players have been allowed to bring a small number of family and friends into the bubble for the later rounds of the playoffs.