Not Federer, not Wawrinka: Bencic gets gold for Switzerland 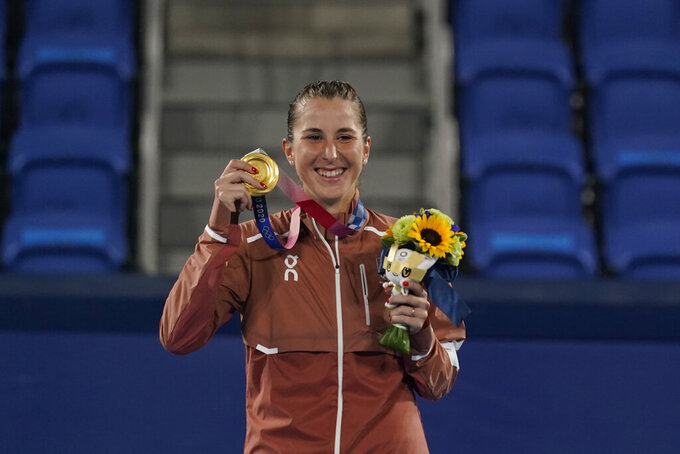 Belinda Bencic, of Switzerland, poses with the gold medal in the women's singles of the tennis competition at the 2020 Summer Olympics, Sunday, Aug. 1, 2021, in Tokyo, Japan. (AP Photo/Seth Wenig)

TOKYO (AP) — A Swiss tennis player won gold in singles at the Olympics and it’s not Roger Federer or Stan Wawrinka.

And she’s not done yet.

The 12th-ranked Bencic beat Marketa Vondrousova of the Czech Republic 7-5, 2-6, 6-3 at the Tokyo Games for the first major title of her career and she’ll also contest the women’s doubles gold medal match on Sunday.

“It’s unbelievable to have two medals, to have one gold and the other still to be decided," Bencic said. "I will give all the energy that I have left in me.”

Federer and Wawrinka won gold together in men’s doubles in 2008 then Federer lost the 2012 singles final to Andy Murray at Wimbledon.

Not even Martina Hingis, the Swiss player who Bencic’s career was inspired after, claimed an Olympic title. Her best result was silver in women’s doubles in 2016 with Timea Bacsinszky.

“I think I accomplished it for them,” Bencic said. “They did so much in their careers. I don’t think I will ever be able to accomplish what they did. So it’s for Martina and Roger.”

Marc Rosset was the only previous Swiss player to win gold in Olympic singles, in 1992.

Neither Federer nor Wawrinka entered the Tokyo Games.

Bencic's previous best result was reaching the semifinals of the 2019 U.S. Open.

Bencic took a medical timeout midway through the third set to have the big toe on her right foot treated for an apparent blister. But she came back out and didn't appear troubled.

When a backhand return from Vondrousova sailed long on Bencic's second match point, Bencic fell to the court on her back before the ball even landed.

“I really don't know how it worked out for me," Bencic said. "I really had a lot of belief in myself.”