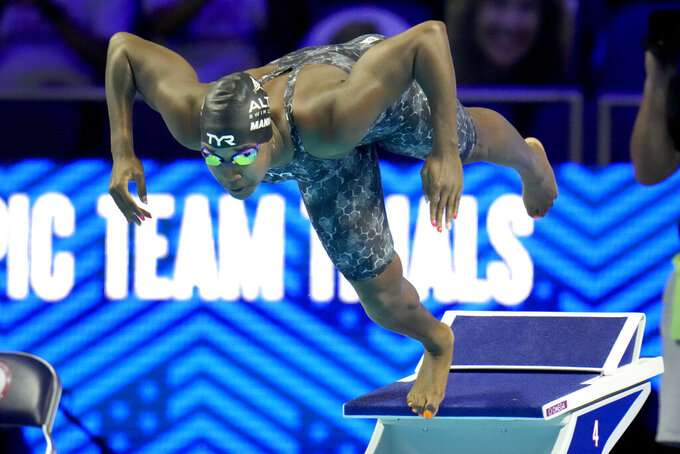 FILE - In this June 19, 2021, file photo, Simone Manuel participates in the women's 50-meter freestyle during wave two of the U.S. Olympic Swim Trial in Omaha, Neb. On the eve of the Tokyo Games, it’s clear that just arriving at this point for some of the world’s greatest athletes was more of a mental-health challenge than it was a physical one. The COVID-19 postponement altered years of training plans, and the uncertain landscape amid the ongoing pandemic only added to lingering anxiety. (AP Photo/Jeff Roberson, File)

Sam Mikulak felt frantic. The American gymnast had his training disrupted by COVID-19, and the Tokyo Olympics were postponed until 2021.

That unease stayed with Mikulak for a while, and it led him to confront all the ways the perfectionism of gymnastics had affected the rest of his life.

“I’ve had to like change my whole circuit ... of just how to find appreciation in the imperfect,” he said. “And those are the types of things that have really made me a lot happier now. But it was a very hard and dark time to go through to get there. And quarantine was the only time that I’ve ever had in my life where I could actually go through that process.”

On the eve of the Tokyo Games, it's clear that just arriving at this point for some of the world's greatest athletes was more of a mental health challenge than it was a physical one.

The COVID-19 postponement altered years of training plans, and the uncertain landscape amid the ongoing pandemic only added to lingering anxiety. The murder of George Floyd by Minneapolis police in May 2020 sparked a worldwide reckoning with racism that also weighed heavily on Black athletes.

"This last year for the Black community has been brutal,” swimmer Simone Manuel said during the U.S. swim trials, acknowledging after a loss that she had been diagnosed with overtraining syndrome — or burnout — in March and needed to take a three-week break from training.

Preparing for Tokyo during the pandemic was particularly challenging for Ginny Fuchs, an American boxer who uses her schedule to help her deal with her obsessive-compulsive disorder.

Ashleigh Gentle, a 30-year-old triathlete from Australia, took a break after the world was locked down due to COVID-19. She worked on renovating her Brisbane house with her partner, ultramarathoner Josh Amberger.

But Gentle's family lives on the Gold Coast south of Brisbane, and she felt their absence.

“Of course I was also very worried and concerned for them," she said. "We weren’t able to travel any more than 50 kilometers (30 miles) from home, so seeing them was off-limits. That was tough.”

Olympic athletes have more options than ever before when it comes to mental health support, especially those with the biggest federations. Beyond the heightened conditions brought on by the pandemic, it's about addressing the needs of a generation of athletes more comfortable with seeking help.

David Hughes, the chief medical officer for the Australian Institute of Sport and the country's Tokyo contingent, said their athletes will have access to “on-the-ground psychology services” during the Games and online services if the athlete has a relationship with a psychologist. It already has emergency support structures in place.

The U.S. offers similar support for its athletes, including a mental health support line that receives about eight calls per week on average and support groups organized around particular topics. It runs a mental health registry of vetted providers, and it recently started mental health assessments.

“For every athlete going to the Games, we started doing a mental health screen,” said Dr. Jessica Bartley, director of mental health services for the U.S. Olympic & Paralympic Committee. “And so we're getting baseline mental health information on all of our athletes, every single sport that's going.”

The USOPC piloted its assessment program with USA Swimming, with about 60% of its athletes being flagged for mental health concerns in the runup to its Olympic trials. The top issues were related to nutrition, sleep and anxiety.

Asked how the mental health challenges for athletes heading to Tokyo compares with previous games, Bartley opted for a big-picture approach.

American long jumper Brittney Reese was training at the Olympic Training Center when it was shut down because of COVID-19. She credited her coach, family and agent for helping her make it to the Games for the fourth time.

She also worked with a sports psychologist, who provided some simple guidance that went a long way.

“Just go be me," Reese said. “I’ve been here plenty of times. I know what it takes and I know what to do.”