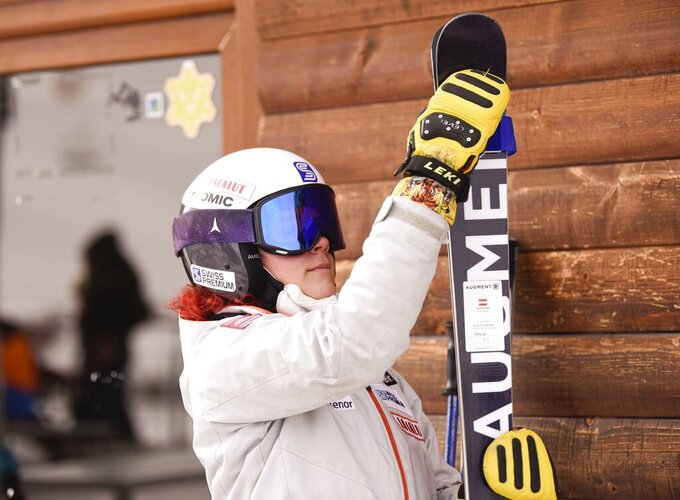 Kiana Kryeziu holds her skis prior to training at the Arxhena Ski center in Dragas, Kosovo on Saturday, Jan. 22, 2022. The 17-year-old Kryeziu is the first female athlete from Kosovo at the Olympic Winter Games after she met the required standards, with the last races held in Italy. (AP Photo/Visar Kryeziu)

BROD, Kosovo (AP) — Competing in the giant slalom at the Beijing Olympics will be a giant step for 17-year-old Kiana Kryeziu and her country of Kosovo.

Kryeziu is the first female athlete from Kosovo at the Winter Games after she met the qualifying standard during races held in Italy.

“I really didn’t expect it would happen this early," Kryeziu told The Associated Press. "It was one of my biggest goals. It was one of my dreams and now all is becoming reality.”

Not that it's been easy, she said, with a lot of hard training as well as finding the money for an expensive sport.

Kryeziu had her main financial support from sponsors, though she's grateful also for help from Kosovo's ski federation, Olympic committee and sports ministry.

Equally important, “just one phone call away” was the support of her father and coach.

“Her participation in the Olympics is the greatest achievement and, who knows, any good result (is possible),” her coach Agim Pupovci said.

Visar Kryeziu, Kryeziu’s father, said her achievement in making the Olympics “shocked us, as well as all the nation.”

Kryeziu started to race as a skier around 10 or 11 years old.

“And then I fall in love with it," Kryeziu said, calling it “passion and happiness” since then.

Her father, who is a photographer with The Associated Press, saw the potential.

“I saw that if I invested 10% of my time on her, the return was 110%,” Visar Kryeziu said. “The secret behind it is a lot of work, lots of commitment, passion for the sport and dedication.”

Her training drained the family’s budget but financial support from sponsors allowed her to train in Austria and Italy last year.

Kryeziu's ambition is to finish no more than 10 seconds behind the winner in Beijing. The Olympics begin Feb. 4.

Kosovo became a member of the International Olympic Committee in 2014.

After the 1998-99 conflict that killed some 13,000 people and ended after NATO bombed Serbia to stop its crackdown on separatist ethnic Albanians, Kosovo was first governed by the United Nations and in 2008 declared independence. It is not recognized by Serbia.

Kryeziu is in her last year at high school.

“Juggling school, sport, family and social life is very hard,” she said, but “it seems I’ve been able to find the perfect balance.”