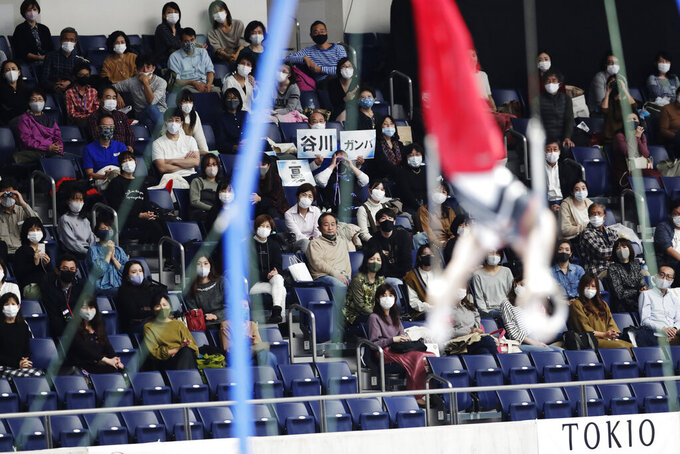 Audience members cheer for Wataru Tanigawa of Japan as he competes in the rings during an international gymnastics meet in Tokyo on Sunday, Nov. 8, 2020. Gymnasts from four countries of China, Russia, U.S. and Japan performed in the meet at Yoyogi National Stadium First Gymnasium, a venue planned to be used in the Tokyo 2020 Olympics in the summer 2021. (AP Photo/Hiro Komae)

GENEVA (AP) — Encouraged by progress this week in finding a COVID-19 vaccine and staging sports events in Japan, the IOC is getting “more and more confident” that next year's Tokyo Olympics can have fans in the venues.

After the 2020 Summer Games were postponed by one year, the International Olympic Committee has put faith in progress for rapid testing for COVID-19 and vaccines to ensure that they can take place starting July 23.

News from pharmaceutical firm Pfizer on Monday of promising trials of its vaccine followed Tokyo hosting an international gymnastics competition at the weekend.

“Having seen now the different (event) tests in Japan I think we can become more and more confident that we will have a reasonable number of spectators then also in the Olympic venues,” IOC President Thomas Bach said.

Asked if the IOC could itself try to acquire vaccine doses for Olympic participants, Bach said contact is ongoing with the World Health Organization and “a number of the manufacturers.”

“There are different options under consideration, how vaccines can be made available,” he said.

However, he added that athletes should not be a top priority worldwide.

“The first wave of vaccination ... must be for the people in need, for the high-risk groups, for the nurses, for the medical doctors and for everybody who is keeping our societies alive,” Bach said.

The IOC leader said he will go to Tokyo next week for a first visit since the postponement decision was made in March, and the traveling Olympic party had begun a period of quarantine to prepare.

Bach gave a firm “no” in response when asked if a contingency for canceling the Olympics would be discussed.

In other Olympic business Wednesday:

— Bach welcomed the NBA’s 2020-21 schedule that frees players for the Tokyo Olympics. The regular season starts two months later than usual, in mid-December, but is cut by 10 games to 72.

“This is what the players want and the Olympic movement wants,” Bach said.

— The IOC passed a 16% increase in its 2021-24 budget to help national Olympic bodies and athletes prepare for the Summer and Winter Games. The Solidarity Commission will have $590 million to distribute with a bigger share going direct to athlete scholarships.

— Activists in Belarus sent evidence received by the IOC this week to support claims that athletes are facing reprisals for protesting the disputed re-election of state President Alexander Lukashenko. The IOC pledged investigations last month.

The IOC has resisted calls to suspend Lukashenko, who has been president of the Belarus Olympic Committee for 23 years.

— The troubled International Weightlifting Federation will not face a review of its place at the 2024 Paris Olympics until after the Tokyo Games, Bach said.